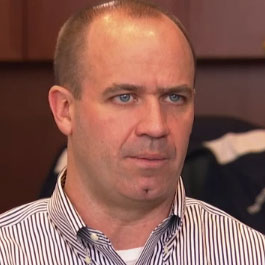 Everything is new at Penn State. New coach, new schemes, new hopes, new era. It?s exciting ? and a little scary for a program that was led the past 46 seasons by Joe Paterno. What?s gonna happen? I talked to Bill O?Brien as spring drills were coming to end with the Nittany Lions? spring game this Saturday.

O?Brien arrived from a wildly successful stint as offensive coordinator with the New England Patriots to assume command of a Penn State program that was rocked by off-field scandal in 2011 that cost Joe Paterno his job. He subsequently passed away.

O?Brien, 42, hasn?t coached in college since serving as offensive coordinator at Duke from 2005-06. The former Brown defensive end has high hopes as Penn State?s first new coach since JoePa took over in 1966.

O?Brien has challenges. He knows that. The chief issue: Installing his Patriots? offense. The defense also must replace all four starters in the secondary, while the line needs pass rushers and a force inside to take over for Devon Still.

Viewers can learn how to watch Saturday's Blue-White game over here.

Q: How has the installation of your New England Patriots? offense been going?
A: It has been somewhat of a slow process. We have made strides, but we aren?t where we need to be at this point so we are going to have to have a really good summer. The coaches can?t be around the players, so the players will be in charge of that, and then have a good training camp. I think we have a chance to make a lot of strides and hopefully when they come back from training camp they will have a better understanding of what we are trying to do.

Q: Will you leave the spring knowing who will be your quarterback?
A: Probably not.

Q: How has the new strength and conditioning coach impacted the team?
A: I?m not real sure what was done in the past. But I know what I believe in. Craig Fitzgerald and I believe in the same things, which are Olympic lifting, speed training, change-of-direction training, conditioning and being creative with these guys. We don?t want them to do the same things every day. And we want to train with enthusiasm. We play music down there. We have a lot of different ways to try to keep the environment in the weight room up-tempo. These guys seem like they have bought into it, and a lot of guys have made strides. It has gone really well up to this point.

Q: Tell me a few things each of your quarterbacks does well.
A: Matt McGloin operates the offense pretty well. He?s a competitive guy. Matt just needs to be more consistent in his decision making.

Rob Bolden is another guy operates the offense pretty decently up to this point. Throws the ball well, has a good arm. When he throws on rhythm, he is accurate. Like Matt, he just needs to be more consistent in his decision making.
Paul Jones is another guy who has operated the offense pretty efficiently when he has been in there. He?s a smart guy who has a good arm and has done some good things. He?s another guy who needs to be more accurate in the passing game and continue to be consistent in making decisions.

Q: What were your first thoughts when contacted about the Penn State job?
A: I was excited. I felt like it was a place where it held a lot of the same ideals that I hold true to me. And a place where you could play really good football and guys you coached could get great degrees. It was a very exciting opportunity for myself and family. And it was definitely something I wanted to explore.

Q: What will it be like following a guy like Joe Paterno?
A: I don?t think about it that way. There will never be another Joe Paterno. Every day I am here, I am so appreciative of what he did here. Four hundred and nine wins, that?s only a fraction of what he did here, and that?s a huge thing. He just meant so much to so many people here. My thing is, I just try to be myself and work very hard for this university every day and football program and our players and staff and just try to be myself. I don?t really think about following Joe, because no one follows Joe. Joe, what he did, will never be matched by anybody in college football. I don?t think anyone ever will coach 46 years as a head football coach in Division I ever again. So, I just try to be myself.

Q: Can you name any names?
A: I?d rather not. I?ll just tell you that they have been very supportive.

Q: How have you been received on the recruiting trail?
A: I have been really happy with it. Recruiting is about relationships. Everyone on this staff has recruited on a high level. So we hit the ground running in recruiting. And all we talk about is our own program when we recruit. We want to get guys on campus to show them this beautiful place and have them meet a lot of special people here. So, we have been well received and recruiting has been going well.

Q: What has changed since you last coached in college?
A: A lot. Obviously, the Internet has continued to evolve with Facebook and Twitter. It?s 24-7 with these kids. And that?s amazing to me. I think also another major change for me is the NCAA rules, like head coaches not being able to go on the road in May. That?s a change. Being a first-time head coach, I?d like to go out in May and meet coaches and get into schools. But we can?t do that. That?s a tough thing. Those are some major changes.