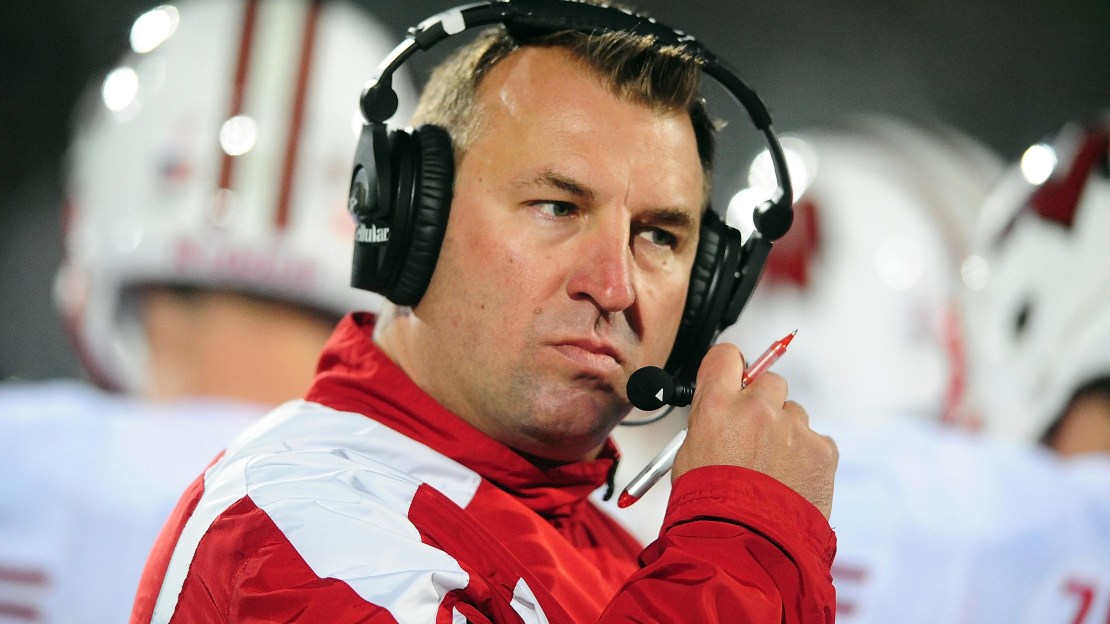 Is there a hotter or better program in the Big Ten right now than Wisconsin? The Badgers are coming off back-to-back Big Ten championships and Rose Bowl appearances. And the good times are primed to continue to roll as Bret Bielema enters his sixth season in Madison with lots of mojo.

I talked to Bielema–who is 60-19 overall and 33-15 in the Big Ten since taking over for Barry Alvarez in 2006–to discuss other personnel issues, a Leaders Division that is filled with transition and questions, Wisconsin?s status as Big Ten lynchpins and his freshly-minted marriage, among other things.

Q: What was your sales pitch to Maryland transfer quarterback Danny O?Brien?
A: We got a release and then made contact. He played against (N.C. State transfer) Russell (Wilson) when he was a freshman (at Maryland). Danny is a football fan, so he watched that whole story unfold last year. Unfortunately for him, there was some coaching transition at Maryland. He graduated in three years with a business degree, which is no easy task. He was looking for an offense he felt he fit in to. With what we do here and what we have done in the past ? he knew our quarterback situation was a little bit injury plagued.

When he came in, I gave him the pitch that we have a lot of good players. We kinda have a quarterback position that is wide open and if you wanna come in and compete for it, we?d love to have it.

Q: Was it an easy sell?
A: I laid out three things to him. I laid out a plan to him, coming in in June and July, being around the players. I showed him our depth chart not just for this year but for two years from now. I think we will have a good team this year, but 2013 might be the best year on paper that I have been able to put together here. I feel good about the kids who will be seniors. We won a championship last year, but we had only 24 guys who were juniors or seniors last year. So we are a pretty young football team.

[Read all of Dienhart's Q&A posts]

Q: Did it feel like your world was collapsing when you lost six assistant coaches?
A: I have had a lot of transition since I have been here. The year before, I lost four guys. It?s nothing new. To lose six is a bigger number. I really embrace transition. It?s a part of college football and a chance to improve. I have nothing against the guys who left, they all left for a significant amount of money if not more or for a job title. One became a head coach; two became coordinators. It?s part of college football. I didn?t feel near as bad as I think a lot of people on the outside felt. I couldn?t be happier with the guys I brought in, especially on the offensive side of the ball. To get them all on the same page and be as clean as we have has been is great. Tuesday may have been the best spring practice since I have been here as a head coach. Clean and crisp, playing with good tempo…

Q: With consecutive Rose Bowl trips, do you think Wisconsin is the best program in the Big Ten?
A: I?m a bit biased, but I feel good about where we are at. It cracks me up when I see other media stuff about who will do what, and no one has done it better than we have in my six years as head coach. No one has won more games than Wisconsin. In the last three years, we have one of the best win totals in the country. Only Boise, Oregon and Oklahoma have won more games than Wisconsin since I took over as head coach.

Q: Early talk is Wisconsin will likely be the favorite in the Leaders Division. Do you embrace those expectations?
A: We embrace it. It has to be part of who we are, part of our DNA. A lot of people from the outside think when you win like we have the last two years that you will become complacent. But we are greedy and want more and expect more as players and coaches.

Q: The Leaders Division has three new head coaches with Bill O?Brien at Penn State, Tim Beckman at Illinois and Urban Meyer at Ohio State. Plus, Kevin Wilson is in just his second season at Indiana. What do you make of the division?
A: There are unknowns at Penn State and what they will be able to put together. I know Indiana will get better under Kevin Wilson as he moves forward. At Purdue, Coach Hope should have his best team. And Illinois, with its transition, it will be interesting. I thought they were one of the best defenses in the Big Ten last year on our schedule and they have a lot of those same players back. I?m excited. It?s a fun time to be in the league.

In all my years of coaching, our Big Ten championship game last year from a coaching, player and fan standpoint was a fun, engaging environment.

Q: What personnel issues are you concerned about?
A: Receiver, from a depth standpoint. Abby (Jared Abbrederis) and Duck (Jeff Duckworth) have played some good football. We have a host of younger players who need to come on. Quarterback, too, just two healthy quarterbacks going through spring ball now. There are a lot of questions at that position.

Q: Who are a couple players primed for big seasons?
A: My left offensive tackle, Ricky Wagner. Every left tackle since I have been the head coach at Wisconsin has won the Outland Trophy. Joe Thomas and then Gabe Carimi. Wagner will be a three-year starter at tackle for us, the last two at left tackle. I think he has a great chance to win the Outland. He?s a big-time player and is playing as good as he ever has. He?s special.

On defense, Beau Allen has jumped out. We never redshirted him. He was a heavily recruited defensive tackle who is playing at a high level.

Q: What?s the latest on the Urban Meyer recruiting flap where you supposedly alleged some improprieties?
A: It?s water under the bridge. There are some things that got some legs there that had nothing to do with the real situation. I had a conversation with Coach Meyer and it is kind of a dead issue and we are moving forward.

Q: How is your marriage?
A: Great. I am five weeks in (see wedding picture). It has been a lot of fun. I probably took longer (time off) than I needed to, but it is a great move for me and my personal life. She?s a big college football fan, so it makes everything good.

Q: When will we see some young Bret Bielemas scurrying around the sidelines?
A: We will play that one out for at least a year or so and get a game plan after that.