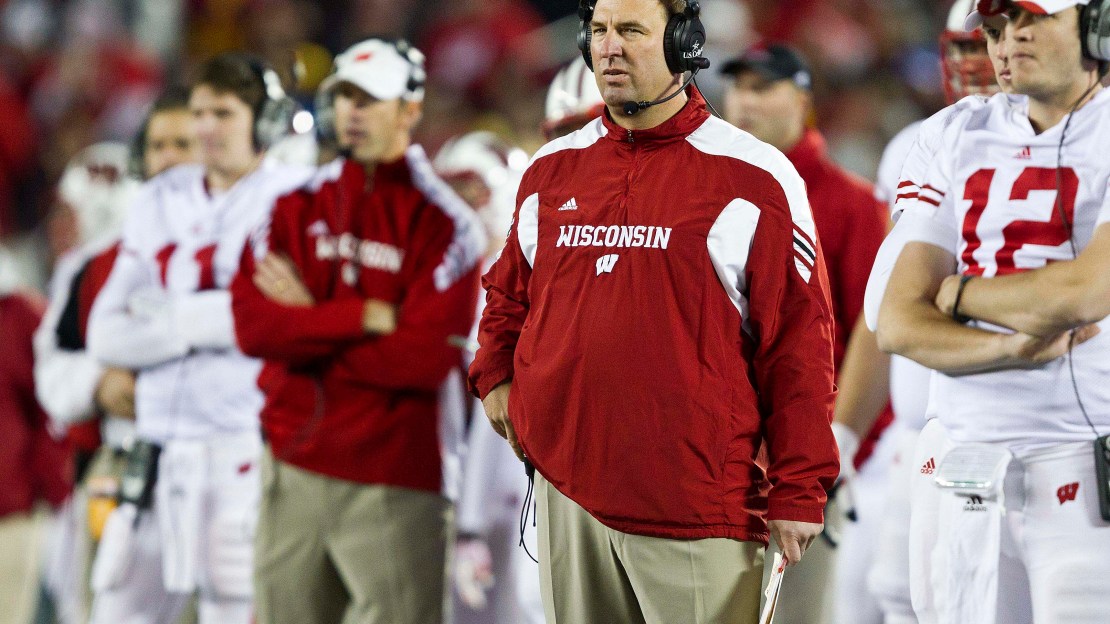 Wisconsin never has won three Big Ten titles in a row, but that will change if it can finish on top again this fall. Still, Bret Bielema?s squad has issues to address this spring. The chief one: assimilating six new assistant coaches. Still, this is a program with lots of momentum that presses on without offensive coordinator Paul Chryst, who left to take the head coaching job at Pitt. The year before, defensive coordinator Dave Doeren left to coach Northern Illinois, so Bielema is used to change.

I talked to three writers who cover Wisconsin to get their thoughts on what the Badgers need to work on this spring. Read my previous roundtable posts over here.

Tom Mulhern, Wisconsin State Journal (@TomMulhernWSJ)
?The team needs to assimilate six new coaches on the staff. That?s an incredible turnover when you consider the head coach didn?t change. In all, six of nine assistants are new. They need to get them to communicate with players and teach how they do things while also incorporating any changes they want to make. That has been a big focus.

?Watch the receiver spot with Nick Toon gone. That spot needs to be filled. Jared Abbrederis is back. The only other receiver they have with any experience is Jeff Duckworth. He was their third guy in the Big Ten championship game. They have a lot of young guys who haven?t played a lot. The 2010 and 2011 recruiting classes, they devoted a lot to the receiver position. Now it?s time to see which of those guys can play. If they had their druthers, they?d like a big body opposite Abbrederis who isn?t the biggest guy in the world. You lose a big receiver in Toon. They have a couple of guys to fit that mold, 6-3 and taller.

?Quarterback is what everyone is talking about, as (Maryland transfer) Danny O?Brien won?t be here until the summer. So that makes anything they do at quarterback kind of a moot point. Because of that, look at the defense. And the lingering issue is pass defense. They ranked pretty high in the nation in pass defense, but a lot of that was because they didn?t face many good offenses. When they did face a good quarterback like Kirk Cousins of Michigan State, he carved them up twice. The big issue in the Rose Bowl was run defense and gaps. They have two jobs to fill in the secondary. One is Devin Smith at corner taking over for Anthony Fenelus. They also have a lot of young cornerbacks, so it?s time to see who can play. And they have a spot at safety with Aaron Henry gone. Sounds like (Dezmen) Southward is gonna be the guy, but we will see.?

Jeff Potrykus, Milwaukee Journal Sentinel (@jaypo1961)
?They have to find a way to get more pressure on the passer. They never adequately replaced J.J. Watt last year. Part of that was because their best pass rusher David Gilbert had a broken foot and didn?t play much. Gilbert is out this spring (after suffering a broken foot twice last season). They didn?t have anyone like Watt. And they also had some issues in the backend defending guys who could throw down field. Michigan State lit them up twice. MSU really moved the ball on them well in the title game.

?The secondary, they are banged up. They have to replace (Aaron) Henry and (Anthony) Fenelus. Devin Smith was a starter but broke a foot in Game 2 and still is not back at practice. Southward looks like the guy to replace Henry. But he?s too inconsistent for my tastes with mental mistakes and being misaligned. I don?t know I he?ll be the guy all year. Devin Gaulden, they really like but he missed a lot of time last year and is still out with injury. There are a lot of questions in the secondary.

?Watch the offensive line. There have been a lot of guys moved around to different spots as they try to find the best players and what there is to work with. They will be set at left tackle; left guard; center and I think right tackle. The right tackle had offseason shoulder surgery, Rob Havenstein. Players are rotating at right guard and right tackle and trying to build depth. The No. 2 center is a true freshman who arrived for the spring. Ricky Wagner is an athletic left tackle who had some penalty issues last year. He may be the best lineman. He?s more athletic than (former Badger) Gabe Carimi. They really like Travis Frederick. He started as a true freshman and then got hurt. He?s a really smart player. (Offensive line coach Mike) Markuson likes him at center. He isn?t as mobile as (departed Peter) Konz but is stronger and more of brute. He?ll be really good.

Jon McNamara, BadgerBlitz.com (@McNamaraRivals)
?Who is gonna emerge at quarterback with just two healthy right now? Joel Stave or Joe Brennan? But with (Maryland transfer Danny) O?Brien?s transfer, things look brighter. He isn?t here now, but everything points to him starting in the fall. But they still want to know what they have with Stave and Brennan.

?The secondary should be watched. Devin Smith is back from injury and Marcus Cromartie is on the other side. There are quite a bit of questions with those two. That?s a focal point.

?The special teams are being overlooked, I think. They are losing their kicker, punter and long snapper. Drew Meyer, a true freshman, is the only punter on the roster now. Kyle French probably will take over at kicker but he doesn?t have a ton of experience. James McGuire is the long snapper who has no experience.?