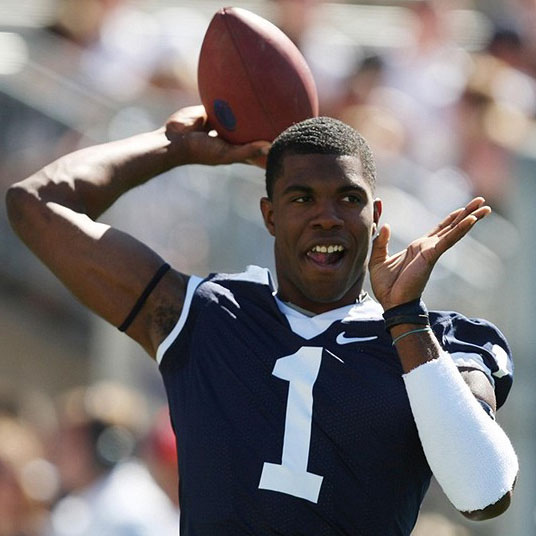 As with my Daily Big Ten Links, here are some of the bigger items buzzing in Big Ten territory with spring exhibitions looming this Saturday at Michigan, Northwestern, Purdue, Indiana, Nebraska, Iowa and Illinois.

Want to know how to watch any of the seven Spring Football exhibitions? A full and detailed rundown is right here. Need a list of fan events or rosters for Saturday's seven events? Got it here. Got a burning question for me, BTN's very own Tom Dienhart? Fire away.

Buckle your seatbelts, Iowa fans: Your offense is about to take off . No, the new coordinator isn?t installing the Run-N-Shoot, but the Hawkeyes are executing a lot of no-huddle.

?We?ve been practicing (against) a lot of hurry-up offense,? new defensive coordinator Phil Parker said in a story by Randy Peterson of the Des Moines Register. ?That?s what we see probably four, five times (during) a year, so that helps us. We?ve done that in the past, too, (but) we?ve probably done that a little more than normal.?

Davis ran some no-huddle when he was pushing the buttons on the Texas attack. And often times, the results were good.

?We?re doing some tempo stuff in our no-huddle,? Davis said. ?Some of that has been extremely fast no-huddle, and I?m pleased with that.

?We?re still not greased up and totally comfortable with it, but we?re headed in the right direction.?
Look for quick passes to the wideouts, tight ends and running backs. This could be a fun offense to watch. Yes, it?s true, Iowa fans.

Seisay was one of the most touted JC recruits in the nation last season. So landing him was a big coup for the Cornhuskers, who must replace stud corner Alfonzo Dennard. What makes Seisay unique is he?s 6-1, 200 pounds-and fast. That?s a rare combination of size and speed at cornerback. And he?s picking up the scheme after arriving in time for spring drills.

"Mo's come in and done a good job this spring. His strength is one of his strong points," defensive backs coach Terry Joseph told Brian Rosenthal of the Lincoln Journal-Star, noting Seisay's ability to be physical with receivers while also being strong in run support.

Standing room only: The quarterback meeting room figures to be packed next fall at Wisconsin with six signal-callers. That?s too many. But, as we know from history, these things tend to take care of themselves.

For now, sophomore Joe Brennan and redshirt freshmen Joel Stave are the only two competing in the spring. Senior Curt Phillips and junior Jon Budmayr are out with injuries. Touted freshman Bart Houston and heralded Maryland transfer Danny O?Brien will be on campus this summer. For their part, Brennan and Stave took the news of O?Brien?s transfer well.

?I think they?ve handled it great,? said Canada. ?We only have two quarterbacks who can play right now. We?re playing big-boy football and things happen, so we have to have depth at that position. They understand that, and they?re competitors. Nobody?s going to turn it down.?

So, for now, everyone is saying the right things, as offensive coordinator Matt Canada insists there is ?legitimate competition? in a story by Tom Oates of the Wisconsin State Journal.

Perhaps. But, I don?t think O?Brien picked Wisconsin over Penn State to sit on the bench.

Crowded backfield: Wisconsin isn?t the only school with myriad options at quarterback. Check out Purdue.

The Boilermakers have three signal-callers who have started games in Caleb TerBush, Robert Marve, and Rob Henry. Only TerBush and Marve have taken part fully this spring, as Henry continues to recover from a knee injury as Purdue preps for Saturday?s spring game.

?I?m really excited about the quarterback position,? Danny Hope said in an article by LaMond Pope in the Fort Wayne Journal Gazette. ?It?s the first time since I?ve been the head coach at Purdue that we have some proven quarterbacks that have played in the game, that have won. They are experienced and ready to go. The very first day of practice, we were able to do signals and have a clock. A lot of things that may sound simple, but it?s not so simple when you?re a brand-new quarterback all the time.?

Look for Hope to again likely use two quarterbacks, as he likes to mix and match talents with game-time situations and also just enjoys maximizing the talents of each.

But, some coaches would eschew such a multiple quarterback system. You?ve surely heard the phrase: If you have two quarterbacks, you have none. Which makes me wonder: What would be an apt phrase pertaining to having three quarterbacks?

Forget it. Danny Hope and OC Gary Nord are a heck of a lot smarter than me.

Tweets That Matter: They tweet it, I break it down.

TV for spring game. So, "We're not going to put everything out there for our opponents to watch all our tweaks," John Papuchis said.#Huskers

My take: I guess you can?t blame the Cornhuskers-or any team, for that matter-for not wanting to show much, if anything in the spring game. Oh, well. Still fun to get a taste of football in April!

Graham Spanier now involved in national security. A great love of his. http://t.co/jJR5tt7G

My take: I don?t even know what to make of this. Do you?

That?s what Bolden?s high school coach thought when he clipped and mailed to Bolden a story last winter about the New England Patriot star?s struggles at Michigan, according to a story about Ron Musselman of StateCollege.com.

?Use this as motivation,? Buchanan wrote in a note to the Penn State junior quarterback. ?Here?s one of the best quarterbacks in the NFL right now and he didn?t have it easy in college. He went through all sorts of trials and hardships and was thinking about leaving Michigan.

Progress has been scant since Bolden became the first freshman to start an opener for Penn State in a century in 2010. The ugly numbers: Bolden has completed 39.3 percent of his passes last season, and has thrown just seven touchdown passes and 14 interceptions since arriving in Happy Valley two years ago. And Bolden also is 0-4 against Top 25-ranked teams.

Peeks at the new coach Tim Beckman?s team have been few and far between. The Fighting Illini will play their spring game this Saturday, an even that will be televised to curious eyes everywhere. What will we see?

?We won't showcase everything," Beckman told Loren Tate of the Champaign News-Gazette. "We just had a 55-play scrimmage for special teams, so we won't show any of our special teams Saturday. There'll be no kickoffs or punt returns. In terms of our offensive and defensive schemes, we'll only show about 50 percent. We don't have our blitz tracks in."

Tate thinks this Illini team appears to have just enough quality talent to go around, if Beckman can hold it together and uncover a few surprises like Mercilus and A.J. Jenkins along the way. If that happens, the buzz will return.