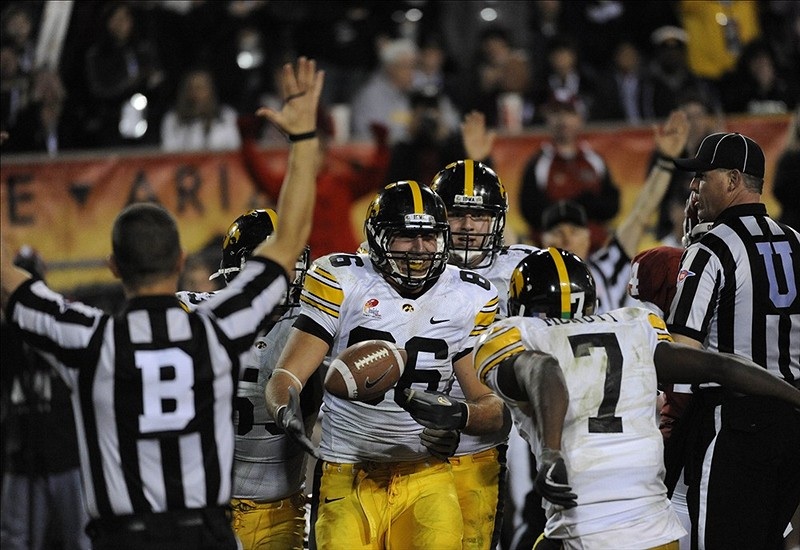 Here?s what is buzzing in Big Ten football circles on this glorious Wednesday, as we barrel toward the first batch of spring games this weekend.

CHANGING IT UP: Are the days of the traditional tailback about to vanish at Ohio State with the arrival of Urban Meyer? Rob Oller of the Columbus Dispatch thinks so.

Oller says Meyer will adjust, turning his tailbacks into multipurpose players. It will not seem like a sea change at first. The Buckeyes still will run their tailbacks, but the ?November weather? offense on which the program was built gradually will fade. Meyer?s modern backfield means that former running backs will face slim threat of their rushing records being broken.

?The game has changed a lot,? said Northwestern coach Pat Fitzgerald said. ?Teams are running similar offenses to the spread. That?s been happening for 15 to 20 years now, where you?re not bringing in the traditional running back. Now you?re running zone scheme with smaller, faster guys.?

I still find it difficult to believe the stud tailback will become a dinosaur. Michigan State?s Mark Dantonio agrees.

?We?ve always had a featured guy here and that guy has pulled the load. We will continue to recruit that position,? he said.

TIME TO IMPROVE: When you think of the Penn State offensive line, what do you think of? Exactly. Nothing. The unit has been average-at best-in recent years, the standouts few and far between.

But there?s hope. Remember, it?s spring-and the Nittany Lions have a new coaching staff that includes a strong line coach in Mac McWhorter. Guard John Urschel and tackle Mike Farrell figure to be key building blocks of McWhorter?s first line, according to Bob Flounders of the Harrisburg Patriot-News.

?For me, personally, I feel like it's been a very good winter and spring for me, just to get my strength up, my speed up," said Urschel, who split time at right guard with departed senior DeOn'tae Pannell last season.

"Sometimes, all you have to do is just change your lifting regimen and you'll see great gains right away. I definitely see the results."

For now, it looks like the Nits starting o-line will feature Urschel and Miles Dieffenbach at guard; Farrell and Adam Gress at tackle and Matt Stankiewitch at center.

?There's a lot of youth and excitement and competition (on the offensive line)," said Farrell. "Whenever you get a new coaching staff in an organization, you know, they truly mean it when they say it's an open competition because they don't have the same opinions ? on players that they carry from year to year when they have a staff in place for a long time."

It?s vital for this unit to step up to create room for star back Silas Redd and a ground game that may have to play a big role as the passing game develops early in the season.

The tight end wasn?t a big part of the offense last season, but new coordinator Greg Davis has plans to use the big fellas on the end on the line. And he developed some good ones at Texas, including Bo Scaife, Dave Thomas and Jermichael Finley. The Hawkeyes-who have produced the likes of Dallas Clark, Tony Moeaki and Scott Chandler in recent years–return C.J. Fiedorowicz and Zach Derby.

?I think just that the tight end group as a whole has come a long ways,? quarterback James Vandenberg said. ?They are expanding what we can do with the tight end position.?

This is good news for an offense that is at crisis level at running back and in search of go-to receiver.

BADGER BACKFIELD: Wisconsin is toying with the idea of using Montee Ball and James White in the backfield together. It doesn?t seem fair, does it? It?s all about trying to find a bigger role for the speedy White, whose numbers fell in 2011 as Ball ran for 1,923 yards and scored 39 touchdowns. White ran for 713 yards last season after gaining 1,052 in 2010.

?As a competitor, you want to play more,? said running backs coach Thomas Hammock. ?So I think he wants to play more. He?s putting in the work to play more. Obviously, he?s doing enough things to say, maybe we need to put them both on the field.?

ALABAMA ON THE MIND: Yes, it?s only April, but Michigan can?t stop thinking about Alabama, writes Kyle Meinke of AnnArbor.com.

?Everybody talks about it," senior safety Jordan Kovacs said. "That's a huge one for us to be opening with, and all the players are excited about it. Not many people get an opportunity to go to Dallas and play the defending national champs. We're really looking forward to it."

The game vs. the defending national champion Crimson Tide will be played in Jerry Jones? palatial palace in Arlington, Texas. It is the first defending champ Michigan will open vs. since it lost to Notre Dame, 24-19, to kick off the 1989 season. (In case you are wondering: Bama is an early two touchdown fav.)

The countdown to September 1 has begun.

MSU is expected to hear soon from the NCAA on if Tennessee transfer DeAnthony Arnett will be allowed to play this fall. If so, he will significantly bolster a receiving corps that also figures to feature Tony Lippett, Bennie Fowler and Andre Sims, Jr.

?They?re looking great,? Maxwell said. ?I mean, I?ve said it before and I?ll keep saying it–this group of wide receivers has all the tools to be just as explosive and be the playmakers that we were fortunate to have in the past.?

If so, that?s good news for a Michigan State team that looks primed to repeat as Legends Division champs.

My take: I don?t know if this is a good thing for Penn State. I think the Nits need to begin to get some definition at quarterback. Then again, maybe it?s best to keep calling the race ?even? so all competing parties remain interested and involved.

My take: I think Montee Ball may be correct. I think there?s a real chance the Buckeyes could have the best record in the Big Ten in 2012. Of course, they are ineligible to win the conference title or play in a bowl. Still, OSU may be motivated by notching the best record with a roster that is talented. The defense should be terrific, if the linebackers come on. The key will be the offense, which must continue to adapt to Urban Meyer?s new scheme and find playmakers.

One of the more intriguing and random stories about Indiana's spring practice. They're already prepping for Navy's wishbone.

My take: How about that? There is early prep time, and then there is EARLY prep time, as the Hoosiers won?t meet Navy until Oct. 20. I know it takes time to get accustomed to that triple-option offense of the Mids, but, golly, this is early.