Watford, Zeller to Return to IU Next Season 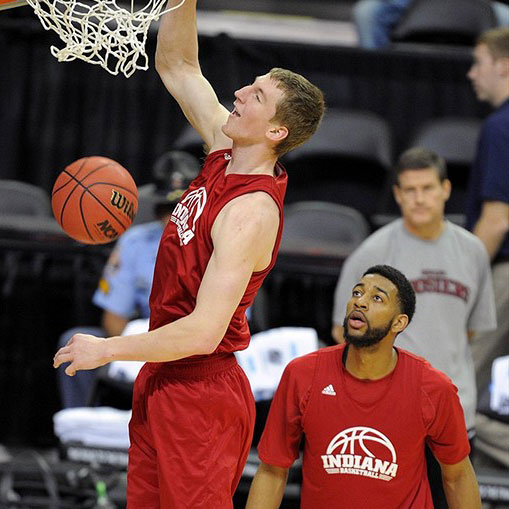 Let the anticipation begin at Indiana. With the official announcement this morning that Christian Watford and Cody Zeller were returning to the Hoosiers for next season, Indiana can begin thinking big for 2012-13. How big? The Hoosiers may be the preseason No. 1 team.

At the least, Indiana figures to be the heavy favorite to win the Big Ten for the first time since 2001-02, when the Hoosiers also lost in the national title game to Maryland with Mike Davis as the coach. Indiana last won the national championship in 1986-87 under Bobby Knight?s stewardship.

The decision of Watford and Zeller means Indiana will welcome back all five starters and 84.7 percent of its scoring from last season?s team that capped a 27-9 mark with a trip to the Sweet 16, where the No. 4 seed Hoosiers lost to No. 1 seed and eventual national champion Kentucky.

Zeller?s return for his sophomore season was anticipated, but no one was sure if Watford would be back for his senior season. But the lure of leaving a legacy appeals to the 6-9 Watford, a native of Birmingham, Ala., who has helped the program rise from the ashes under Tom Crean.

Watford is the leading returning scorer in the Big Ten with 1,287 career points and has a 13.4-point career average. His game-winning 3-pointer against No. 1 Kentucky will go down as one of the most memorable shots in school annals.

?I'm looking forward to the opportunity to complete my degree and to continue restoring the winning tradition at IU," said Watford. "I believe in Coach Crean and our staff and I am eager to lead my new teammates and build on what we started."

After working primarily in the paint his first two years, Watford was able to move outside with the arrival of Zeller last season. On the perimeter, Watford showcased a good face-up game and jump shot. But he needs to become a better passer and ballhandler to compensate for his lack of quickness and explosiveness. Is he a small forward or power forward in the NBA? Again, he seems to lack the ball skills and athletic burst to be a ?3.? And his lack of strength, rebounding toughness and gritty focus cast doubt on his ability as a ?4.?

Unlike Watford-who may not have been drafted in the first round or at all–Zeller was pegged in most mock drafts as a lottery pick. Still, the 6-11 center?s game needs polish, particularly as a jump shooter. He also needs to get stronger and heavier. Still, Zeller is a remarkable prospect.

He was the Big Ten Freshman of the Year and an AP honorable mention All-American. The Washington, Ind., native averaged a team-high 15.6 points and 6.6 rebounds and shot 62.3 percent from the field (4th in the nation). His back-to-the-basket skills defy his experience. Plus, Zeller plays with a maturity and poise that belie his age.

?I grew up hoping that one day I would get the opportunity to play in the NBA, but at this point, I'm not ready for my college experience to be over," said Zeller. "Coach Crean and my family were very supportive and helpful as I made my decision. My college experience at IU this year has exceeded my expectations, on and off the court. I look forward to playing at Assembly Hall next year in front of the greatest fans in the country."