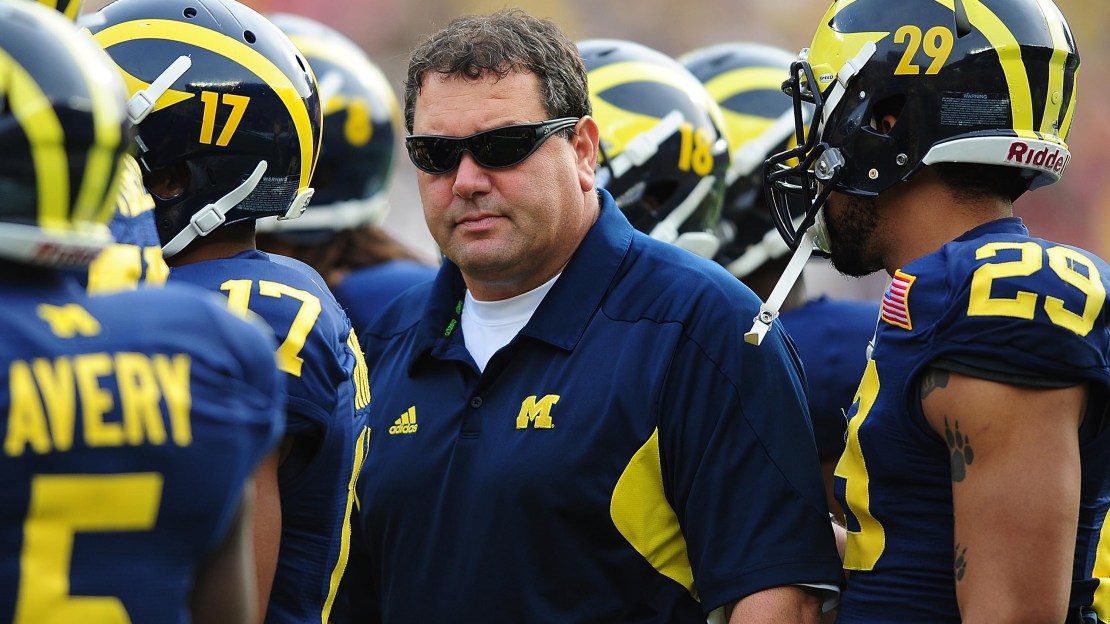 Just four years ago, Brady Hoke was coaching in the MAC at Ball State. Now, he?s leading one of college football?s most storied programs. And Hoke has Michigan on the precipice of big things as he enters his second season in Ann Arbor. Hoke is riding the momentum and mojo of a smashing debut at Michigan in 2011, forging an 11-2 record and second-place finish in the Legends Division. The Wolverines capped the season with a victory over Virginia Tech in the Sugar Bowl.

No one saw this coming after three largely moribund seasons under Rich Rodriguez. Now, for the encore-which could be a good one. Michigan has lots of pieces to build around in 2012, including quarterback Denard Robinson-who along with Wisconsin?s Montee Ball figures to be the top Heisman contenders in the Big Ten this season.

But the Wolverines also have some big holes to plug, highlighted by a defensive line that must replace three starters.

Also, the receiving corps is looking for playmakers. Still, there?s a lot to like about Michigan as it aims for its first Big Ten title since claiming back-to-back crowns in 2003-2004.

I caught up with Hoke as he and the Wolverines were winding spring drills and prepping for the spring game this Saturday.

Q: Have there been any big surprises this spring?
A: There are a lot of guys who haven?t played a whole lot who are getting a lot reps, like it should be. The technique and fundamentals of what we are trying to get done, guys are doing a good job with that. As for surprises, I don?t think there is anything from a blockbuster standpoint. But our competition level has been pretty good.

Q: Have you been happy with the development of the defensive line and receivers, areas many feel have the most to prove?
A: I don?t think I?m happy with where we are at defensively up front. The move of Craig Roh (from weak-side to strong-side end) has been a good one. I think Jibreel (Black) has been a good move inside (from end to tackle). I don?t think we are playing the way we need to play as a front. We need to continue to get positive growth out of Will Campbell, Richard Ash and Quinton Washington when you look at guys who can be good backups or starters. Nathan Brink is out this spring, and he?s a guy who has played some for us, so we are missing him a bit. Brennen Beyer and Frank Clark are competing hard at the outside position. But I don?t think we are happy with where we are at yet, no.

Q: What?s the next step the offense must take in its development?
A: We need to be more efficient. When you look at the games we didn?t play as well as we needed to, you look at the passing game; and we didn?t run the ball as well as we needed to in a couple of those games, too. We have to be more efficient at both. From a receiver standpoint, Jeremy Gallon, Roy Roundtree and Jerald Robinson I think are doing a nice job. Drew Dileo and Joe Reynolds and Jeremy Jackson are all competing pretty good there. For us to take the next step, we are gonna have to play with more consistency. We will have some young players that are here right now or coming in this summer who are gonna contribute.

Q: How must the defense continue to evolve?
A: We have a lot of shoes to fill when you look at Mike Martin, Will Heininger and Ryan Van Bergen up front all being gone. That?s probably where most of our work and attention has been this spring. If we can fill some spots there, linebacker-wise with Kenny Demens and Desmond (Morgan) coming back, the young guys Joe Bolden and Kaleb Ringer have done a nice job along with Antonio Poole and Brandin Hawthorne ? we have some guys inside. But we have to continue to improve.

Q: Who will be the leaders?
A: You hope it will come from the senior class. Roy Roundtree is a guy who to me has been consistent and hard working. Denard (Robinson) being a senior now. Ricky Barnum, who has done a good job at center who we think will be very capable. Taylor Lewan has played a lot of plays. On defense, Jordan Kovacs is a guy who people respond to. Kenny (Demens) and Craig Roh, those three guys on defense.

Q: Were you surprised by last year?s success?
A: I don?t know if I was surprised as much as you really saw a group of kids come together. I thought the leadership from our seniors was a big part of it, how they worked together in the summer and then fall camp. That really molded them as a football team and guys wanted to play like a Michigan football team.

Q: Is Denard Robinson making strides as a passer?
A: I think so. In different formats, situations and scrimmages, I think he has done a nice job. He has had one or two throws where you wondered where he was going with the ball. Or you say, ?What did you see?? But overall, his command of the passing game and what we are trying to do has grown.

Q: What does the arrival of Urban Meyer mean to the Michigan-Ohio State rivalry?
A: I don?t know if it means anything different than it always has. That?s the greatest rivalry in sport. And I don?t think it ever is about the coaches. They never play a down. It?s about those two great institutions in the last Saturday in November. It?s a great rivalry, it?s an intense rivalry, it?s a fun rivalry.