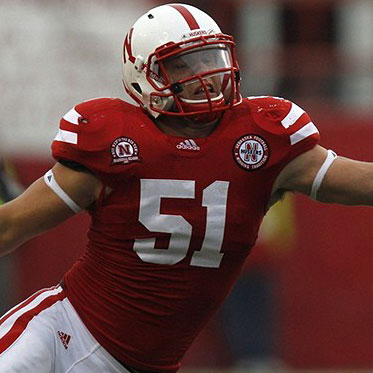 A look at the football news that?s making headlines as we steamroll toward the first Big Ten spring football games this weekend. From Ohio State's spread offense and Nebraska's depth at linebacker to trick plays at Penn State and junior college transfers at Indiana, let's dive in.

Three big phases: Defense ? turnovers ? kicking game. That?s Ohio State coach Urban?s Meyer?s holy trinity. But he knows it?s also vital for an offense that ranked 107th in the nation last year to improve. That?s why all eyes have been on the installation of his spread offense.

?I just think it?s really exciting being out there knowing the guy running your offense is Coach Meyer,? left tackle Jack Mewhort told Tim May of the Columbus Dispatch. ?Anything can happen at any time. You can score on any play.?

Now, the Buckeyes need a ?wow? player to emerge. That?s all.

Thin times? The success or failure of Nebraska?s defense figures to hinge significantly on a senior trio of linebackers that includes Alonzo Whaley, Will Compton and Sean Fisher. The depth behind them? Well, it?s dicey.

?We're still with that transition from the Big 12, more of a spread-out conference, to the Big Ten," Bo Pelini told Rich Kaipust of the Omaha World-Herald. "This was the first year where we really emphasized signing linebackers. That's why we took four. We maybe take three or four out of this year's class, too, to get caught back up."

The lack of depth doesn?t mean a lack of competition, either.

?It's still going to be a battle every day," said linebackers coach Ross Els. "It doesn't matter how long you've played.

"Will Compton is not settled in his position. I'm going to challenge him with whoever's right behind him, ? whoever we bring in. I want those guys to fear for their jobs. I think it's good motivation for them."

Getting tricky: Hang on to your hats, Penn State fans: Early signs are new coach Bill O?Brien will have an exciting offense that may feature more than one trick play. Really.

?The past playbook was kind of simple," wideout Justin Brown told Cory Giger of the Altoona Mirror, pointing out the obvious, "but this one's a lot more creative."

And the thought of having to be the hero every Saturday in ugly, low-scoring games has perked up the defense.

?In practice, with the different looks that we're getting, it is exciting to see that something different is coming from the other side of the ball, that they're trying to score points every time they get on the field," safety Malcolm Willis said.

O?Brien figures to throw often, looking for yards after the catch that were so valuable when he pushed the buttons on New England?s attack. Of course, the fancy passes won?t work if the line-long a sore spot-isn?t better. One reason for hope: The unit has just one coach in Mac McWhorter, as opposed to two last year (Dick Anderson and Bill Kenney), as the big fellas even met separately. Weird.

To review: JoePa didn?t want his offense to lose games.

O?Brien wants to win games with his offense.

This will be fresh-and maybe a lot of fun.

New Hoosiers: Five junior-college transfers-FIVE-have been injected into a woebegone Indiana defense in hopes of propping up a lackluster unit that ranked last in the Big Ten in scoring defense; total defense; rushing defense ? well, you get the picture.

The names to know: linebackers Jacarri Alexander and David Cooper, who have been spring standouts, according to Terry Hutchens of the Indianapolis Star.

The Hoosiers also have added a pair of safeties (Tregg Waters and Ryan Thompson) who are competing for starting spots and a tackle (Justin Rayside).

?They bring a lot of fire and energy, but they can hit, too," said sophomore linebacker Chase Hoobler. "They all just bring a little bit of everything that has to help our team. We had some needs, and these junior college guys are helping to fill them right away."

New assignments: Cam Gordon arrived in Ann Arbor as a receiver ? switched to safety ? and has emerged as a linebacker.

"If I was a safety and some old, bald-headed guy came in here and said 'We're going to take you from safety and put you right up there on a big tight end,' I'd kind of go 'OK,'" Wolverine defensive coordinator Greg Mattison told Nick Baumgarder of AnnArbor.com with a mock look of concern on his face. "But any time it didn't work well, I'd look over at that coach (and wonder what was happening).

"This year, he's doing it very physically. And if (something) doesn't work, he knows why. And knows how to get better at it."

Add an improving Gordon, who had to deal with injury in 2011, with Jake Ryan, and Michigan has a strong situation at strong-side linebacker.

?I'm really excited about (Gordon) because Jake really never came off the field last year," Mattison said. "He truly played almost every snap of every game. Now, it allows you to (have) a very, very good player that can complement him."

Just dropped a thought about the Ohio State O line situation on our blog at http://t.co/Jud8Fv0y.

My take: With so much worry over who will catch passes, the Ohio State offensive line rarely gets talked about. But it should. Both tackles, including stud Mike Adams, and star center Michael Brewster are gone. According to May, the current front looks like this: left tackle Jack Mewhort was the starting right guard last year; left guard Andrew Norwell started the first five games at left tackle last year; Corey Linsley was the sixth man in 2011; right guard Marcus Hall was a work in progress as a backup; right tackle Reid Fragel was a tight end. Yet the first team line has looked quite capable at times this spring, says May. Good thing.

Illinois A.D. Mike Thomas says the plan for football is to play a nonconference game in Chicago the years the Illini don't play at N'Western

My take: If you are an Illinois fan, you have to like this. Not only is playing a game in Chicago good for the Illinois alums in the Windy City, but it is good for recruiting, too. All the exposure Illinois can get in the competitive Chicago landscape is valuable. And it will be a recruiting perk, I think, to tell kids (especially Chicago kids) they will play a couple games in an ?NFL venue? during their Illini careers. Smart move, Mike Thomas!