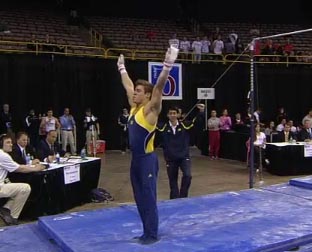 See all the individual results here and check out the All-Big Ten Teams and superlative winners in this post. Also, watch Saturday's highlights right now.

Ruggeri took home the event title in the floor exercise, totaling 15.800, nearly one-half point ahead of teammate C.J. Maestas for the victory. He later won the vault championship with a mark of 15.500. Mikulak led off the parallel bars rotation with a 15.450 and watched that score hold up for the victory. He then notched a 15.550 on the high bar for his second event championship. Ohio State?s Ty Echard and Penn State?s Craig Hernandez tied for the pommel horse championship, finishing with matching scores of 14.850. Nittany Lion Scott Rosenthal claimed the still rings title after posting a score of 15.900.

The individual award winners and All-Big Ten teams were announced following competition on Saturday, with Illinois claiming all three individual awards. Illini freshman C.J. Maestas was a double-winner, being voted Big Ten Gymnast and Freshman of the Year, the second year in a row the awards have gone to the same gymnast; Michigan?s Sam Mikulak won the honors last year. Maestas is the first Illini to win Gymnast of the Year since Wes Haagensen in 2007 and the program?s second Freshman of the Year in three seasons, following Yoshi Mori in 2010. Illinois head coach Justin Spring was voted Big Ten Coach of the Year for the third season in a row.