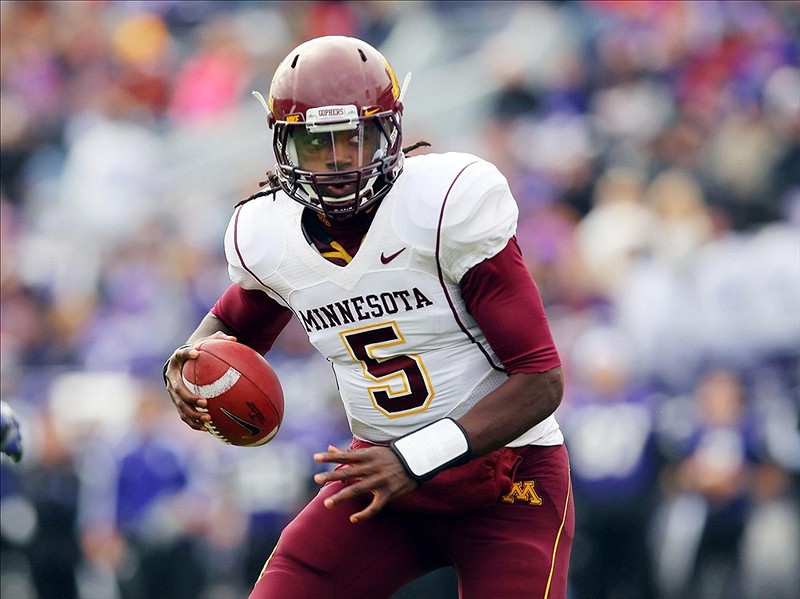 The building continues in Minnesota for second-year coach Jerry Kill, who is coming off a 3-9 season and last-place finish in the Legends Division. Hope floats in Minneapolis, but Kill has a long to-do list if he wants to get the Golden Gophers back to the postseason since Tim Brewster took them to consecutive bowls in 2008-09. The top priority? Improving a porous defense that finished 11th in the Big Ten vs. the run (186.4 ypg), ninth against the pass (216.7 ypg) and 10th overall in the Big Ten (403.1 ypg).

I talked to three writers to cover Minnesota to get their views on the team and what it needs to accomplish this spring. Did you miss my previous roundtables? Read them here: Iowa, Indiana, Northwestern, Purdue,  Michigan, Penn State,  Ohio State, Nebraska, Illinois.

Phil Miller, Minneapolis Star Tribune | @MillerStrib
?Minnesota needs to find offensive playmakers. They don?t have any receivers with any resumes coming back. They don?t have any running backs with any resumes coming back. They have (quarterback) MarQueis Gray and a whole bunch of question marks. They ended up with really only one running back carrying the load last year. It was Duane Bennett-who is gone-and freshmen. They brought in a JC running back in James Gilliam and are trying to sort through all the backs to see who will carry the ball. I think MarQueis is going to carry the ball as much as any running back.

?Da?Jon McKnight is gone at wideout, so they also have to identify who is going to catch the ball. They have Marcus Jones coming back off of knee surgery. He looked good as a freshman last year. But like running back, it?s all inexperienced guys. Who can the coaches count on at receiver?

?On defense, they have to replace both interior linemen. But the line overall is an issue. They haven?t had anything resembling a pass rush in five or six years. They had eight sacks two years ago 15 last year. They just don?t pressure the quarterback.

?Linebacker Gary Tinsley and safety Kim Royston were their leading tacklers, and they are gone. The secondary also needs work, but I think they are gonna be OK. They have Troy Stoudermire back at cornerback, but everything hinges on getting a push up front.

?The quietly are feeling good about Ra?Shede Hageman at tackle. He is extremely athletic. He was an all-state tight end in high school. They are trying to not talk too much about him but are pretty excited about him. He?s an immature kid, so they are holding their breath. But he?s the great hope. They have two ends who played as freshmen last year that they like and hope will step up.

?Bottom line: Gray is the key to the team. He is super talented. He ran for 900 (966) yards and in the two Big Ten games they won (Iowa and Illinois), he was the reason why. But there are times when it doesn?t look like he can complete a three-foot pass. Everyone keeps saying he?s getting better as a passer. He probably is but is still a guy who barely completed 50 percent (50.7) of his passes last year and can look really bad.

Marcus Fuller, St. Paul Pioneer Press | @GophersNow
?The main thing is to protect MarQueis Gray as much as possible and get him a go-to target as a wideout. Those two things will allow him to blossom into a pretty productive Big Ten quarterback as a senior. If that doesn?t happen, you?ll see him rely on his legs to make plays because he doesn?t trust in any particular receiver to bail him out. And he isn?t they type of passer Adam Weber was. When Eric Decker got hurt, Weber still was able to put up some decent numbers because he had that natural passing ability MarQueis lacks. Get him time and a go-to receiver, those are huge.

?Because MarQueis is a dynamic threat, they may not necessarily need a running back to run for 1,000 yards and don?t need a feature back. Just a couple guys they can rely on to take pressure off Gray. Developing the o-line and receiver are more important than finding a star running back.

?On defense, it has been so long since they had a decent passer rusher. I think it was 2008 when Willie VanDeSteeg was third for the Big Ten lead in sacks (10.5). Since then, they haven?t had a guy with more than four or five sacks in a season. That?s really bad. They were last in the country in sacks in 2010. I don?t think Kill has found the next Willie VanDeSteeg, but he is bringing in guys with more speed. Kill also will need to mix up the defense and find some linebackers and corners who can pressure the quarterback, as well.

?The secondary, you are looking at three JC players in the top one or two in the depth chart entering the fall. One corner is a former JC who may start, Briean Boddy. There also is a JC pushing to start at the other corner and at a safety spot. Just a lot of new faces in the secondary. (Troy) Stoudermire is back but he?s coming off injury, so you don?t know how effective he will be. Size also is an issue at safety. But the secondary is making progress and has made some plays in the spring.?

Zach Johnson, GopherIllustrated.com | @ZachJohnsonGI
?I think a priority is to establish an identity on defense. They brought in a lot of junior college players for the secondary. They were set to lose their entire starting secondary but Troy Stoudermire was able to redshirt after an injury last year. That was big. Cornerback Michael Carter is coming on this spring. He was a four-star recruit from Florida but hasn?t really panned out yet, and there has been talk he may transfer. But he has stuck it out and recommitted himself this spring to football and school and is back in the good graces of the staff. Those two, plus the JC kids they brought in, it will be a new-look secondary. That unit got shredded last year.

?It is no secret MarQueis Gray has the chance to be a dynamic weapon for this offense. He had a bit of a learning curve last year in his first year as a starter. He is looking to have a big senior season. For Minnesota to get back to that six-, seven-win range, it?s no secret he will have to have a pretty dominant senior season.

?Minnesota needs help in many areas. There wasn?t one unit you could look at last year and say Minnesota could hang its hat on it. The offensive line play was poor, the defensive line play was poor. In general, both lines must improve. They lost both defensive tackles, and the offensive line was young last year and can build around brothers Ed (tackle) and Tommy Olson (guard), whose dad was a Gopher captain in the 1980s. The o-line needs to continue to grow, and the defensive line needs some significant quality playmakers.?