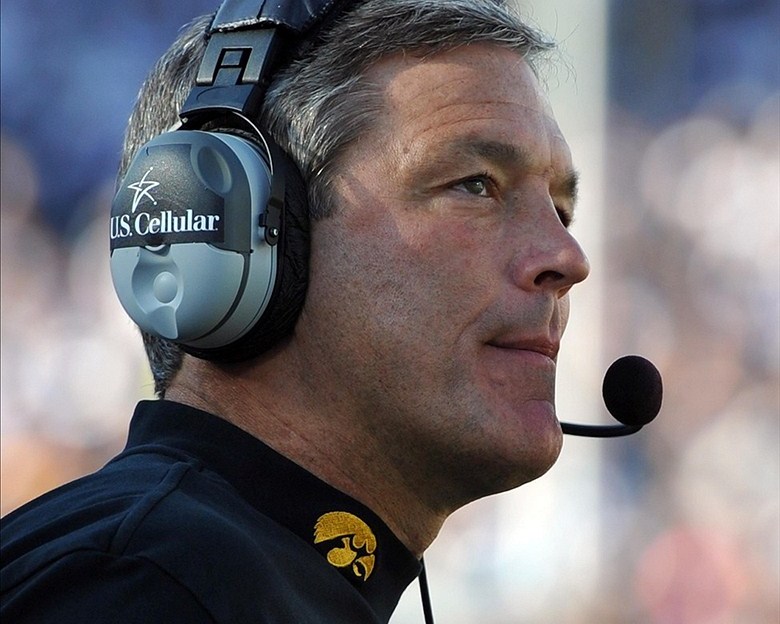 Change is the operative word in Iowa City this spring. There three new assistants, including offensive coordinator Greg Davis and defensive coordinator Phil Parker. And each is tweaking the schemes they inherited from the departed Ken O?Keefe (offense) and Norm Parker (defense). Also, Brian Ferentz (Kirk Ferentz?s son) was tabbed to coach the offensive line and LeVar Woods was promoted to linebackers coach, while Reese Morgan was moved from offensive to defensive line coach.

The Hawkeyes must also begin to address major questions at running back and on the defensive line. I talked to three writers who cover Iowa to get their views on the Hawkeyes this spring, as Kirk Ferentz enters his 14th season in Iowa City. Did you miss my previous roundtables? Read them here: Indiana, Northwestern, Purdue,  Michigan, Penn State,  Ohio State, Nebraska, Illinois.

Also, here's the 2012 schedule for the Hawkeyes.

Randy Peterson, Des Moines Register | @RandyPete
?They lost a lot of players on the defensive line, and it wasn?t that great of a line to begin with. They don?t have any healthy starters this spring. A couple who started off and on last year (Dominic Alvis; Carl Davis) are being held out this spring with injury. The d-line is the biggest question mark.

?Running back also is an issue with Jordan Canzeri, who was supposed to be the starting tailback, hurting a knee in non-contact work last week, so there are no experienced running backs. A couple freshmen could play. The top back now is Damon Bullock, who alternated between running back and receiver last year.

?Another issue is finding a go-to receiver. Losing Marvin McNutt, who a lot of people call the best receiver in Iowa history, hurts. He rewrote the record book. I would guess that role will fall to Keenan Davis.

?With Greg Davis as the new offensive coordinator, it sounds like they are going to throw the ball more. They will show more looks instead of being predictable like they were under Ken O?Keefe. It sounds like Davis is going to loosen things up a bit. That doesn?t mean five wide every play …

Marc Morehouse, Cedar Rapids Gazette | @marcmorehouse
?The defensive line is the No. 1 priority. They have lots of redshirt freshmen there now. In the Big Ten, that won?t get it done.

?The injury to Jordan Canzeri means they are in trouble at running back right now. Damon Bullock and De?Andre Johnson were depth chart filler, I hate to say. They were passed by everyone else last year. In the fall, Greg Garmon and Barkley Hill will step in and help.

?They don?t have a punter now. A team like Iowa that lives in the margins really should know its punter in the spring. The No. 1 guy may be the backup quarterback, John Wienke. He was good in high school, but he came here as a quarterback. It?s kind of a red flag. A guy from Australia is competing with, Jonny Mullings. He has a powerful leg but takes too long to get punts off. In the fall, they will get a guy named Connor Kornbrath from West Virginia, a 6-7 guy who will help out.

?The secondary will be OK. In fact, it may be the strength of the defense. Micah Hyde will be a three-year starter at cornerback. B.J. Lowery will be a two-year starter at corner. He?s good. Tanner Miller is a veteran; Nico Law is a new guy at strong safety. New defensive coordinator Phil Parker will play more press coverage and move Law in the box as an extra defender to protect that young defensive line.

?I like Christian Kirksey at linebacker. I?m not sure about James Morris. He may move outside to the weak side and Quinton Alston may have a chance to be in the middle. They want the three best guys out there. I think Morris is a better weak-side linebacker.?

Tom Kakert, HawkeyeReport.com | @HawkeyeReport
?The offense has to get adjusted to Greg Davis? style and nomenclature. It?s different than it was under Ken O?Keefe. There is an adjustment period. They are doing different things with the route trees and other things. You have to get on the same page.

?And Greg Davis is a guy who works from the press box; O?Keefe was a sideline guy. So, the players must get used to having the OC in the box. There also will be a new way plays are signaled in.

?Greg Davis likes to throw to his backs more than O?Keefe. Iowa really hasn?t utilized backs much to catch passes since Albert Young left. Damon Bullock might be the best fit for that because he has played some receiver. That?s something to watch.

?The defensive line is a kiddie corps now. It?s a short list of guys who even have made tackles in a game. A boatload of redshirt freshmen are in the mix. One senior starter in Steve Bigach. Carl Davis and Dom Alvis aren?t playing now as they get over knee injuries, which may be good because it?s allowing the young guys to play a lot. Alvis was coming on before he tore up his knee. Davis is a big guy. He could be the key guy. He has to emerge, I think. Iowa doesn?t have anyone like him. He?s 6-5, a natural 300-pounder. He can be a force in the middle if he develops. But he hasn?t gotten to that level yet and has had knee problems. He also has to play mean and with an edge. He could change the entire complexion of the line.

?Iowa gave a big cushion in coverage at corner under Norm Parker. Phil Parker wants to tighten that up, five yards or less. And you probably will see less of the linebacker covering on the slot receiver. A corner or safety likely will take that job. The secondary needs to adjust to that style, which is something to watch.?