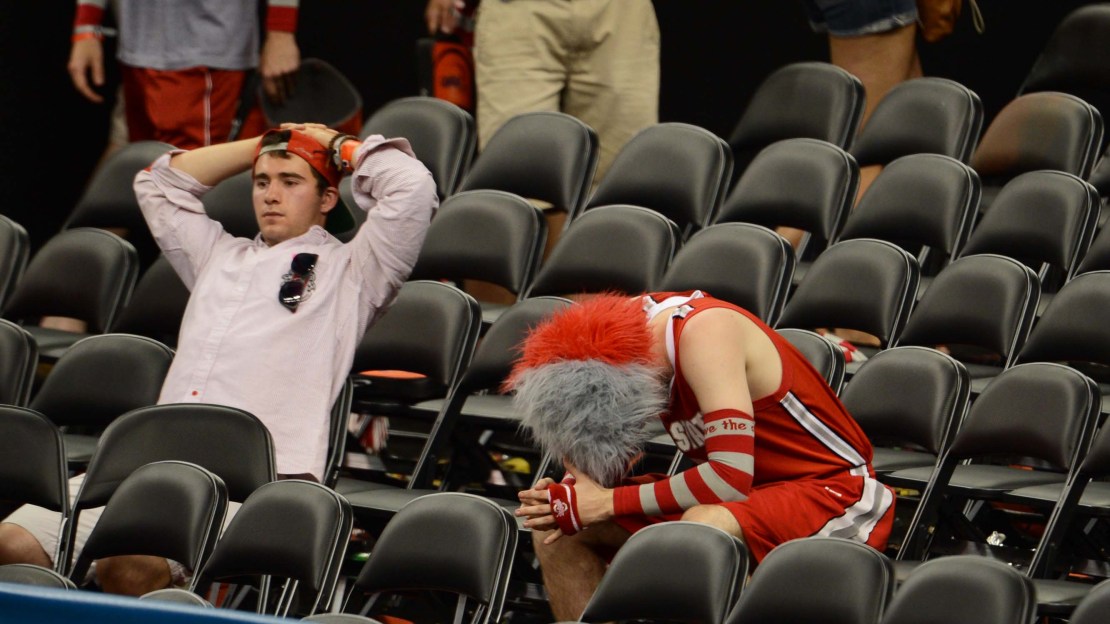 Ohio State led by as many as 13 points in Saturday night's national semifinal against Kansas, but it couldn't hold on in a 64-62 defeat at the Mercedes-Benz Superdome. It was a heartbreaking defeat as Kansas' rally marked the third-largest comeback in Final Four history. BTN.com senior writer Tom Dienhart offers his rapid reaction to the season-ending loss in this post.

Key player: William Buford. The senior forward led Ohio State with 19 points, hitting 6-of-10 shots, and also grabbed seven rebounds. Jared Sullinger had 13 points, Aaron Craft 11 and Lenzelle Smith, Jr., 10. But it all was for naught, as the Buckeyes blew a 34-25 halftime lead (AP recap).

Key number: 33.9, Ohio State?s shooting percentage (box). If that wasn?t bad enough, the Buckeyes got outrebounded 41-30. Sullinger hit just 5-of-19 shots, getting out played by Kansas big man Thomas Robinson, who had 19 points and eight rebounds. Deshaun Thomas hit just 3-of-14 shots, missing late attempts that could have tied the game and committing a key turnover.

What?s next for Ohio State: A painful way for the Buckeyes (31-8) to end the season, blowing a 13-point lead on a few occasions and allowing the Jayhawks to rally for victory. This year?s team advanced farther than last year?s squad, which got beat in the Sweet 16 by Kentucky after entering the Big Dance as the No. 1 overall seed. William Buford was the lone senior on the team. He?s gone. Now, the question looms: Will Jared Sullinger turn pro after his sophomore season? If not, this will be a very good team capable of winning another Big Ten title and contending for a national title. If Sullinger goes, the Buckeyes figure to take a step back, but will welcome back the likes of Aaron Craft, Lenzelle Smith, Jr., Evan Ravenel, Deshaun Thomas and Sam Thompson. And big man Amir Williams will need to take the next step as a sophomore.