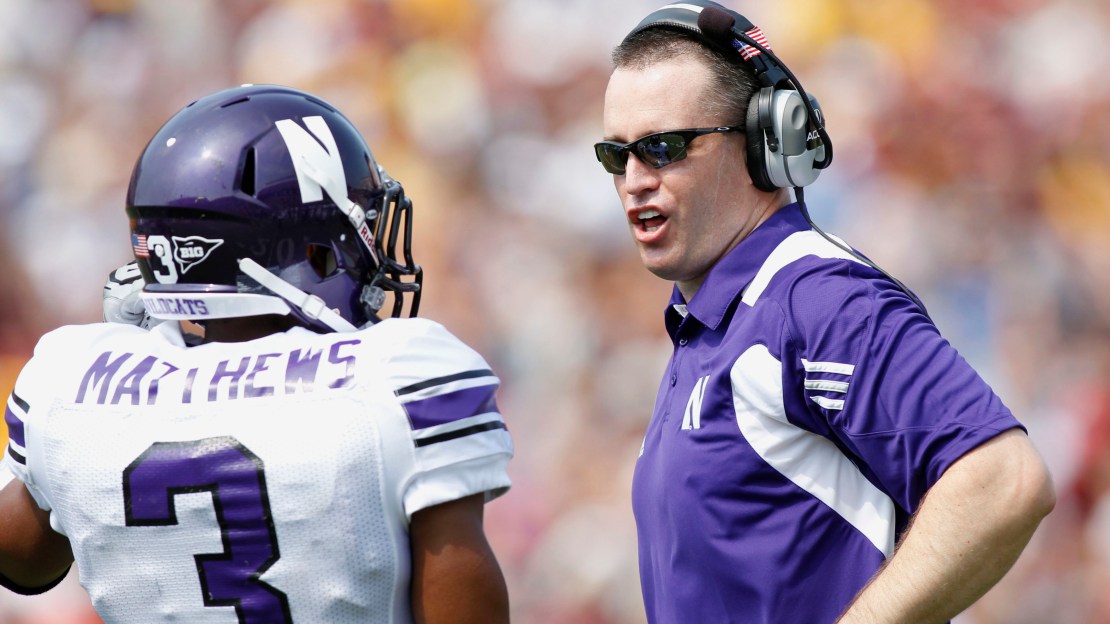 It is four bowls in a row and counting for Pat Fitzgerald and Northwestern. But something is missing: A bowl victory. Fitzgerald is 0-4 in the postseason; Northwestern. But Fitzgerald presses on, coming off his first losing season (6-7) since his 4-8 debut in 2006. And his Wildcats have issues to address this spring. Chief among those is improving a defense that ranked 11th in the Big Ten overall (407.7 ypg), 12th vs. the pass (230.4 ypg) and 10th against the run (177.3 ypg). The offense also has work to do with Dan Persa gone under center. I caught up with Fitzgerald as he was in the midst of spring drills.

Q: Do you have any new schemes or philosophies you are implementing this spring?
A: What we have worked on is No. 1, evaluating the way we have been teaching and what we have been asking our guys to do and how we can improve there from a coaching standpoint. We do that every year, but we have scrubbed everything hard.

No. 2, we are looking at some young players and where they fit and how we can play to their strengths. That?s evolving and it might take us longer than we thought because we had some guys dinged up coming out of the season and don?t have them all back yet. So when we get to camp, we will have a good idea of the pieces and how they will fit together.

And we want to start working hard on our chemistry. We do that every year. Working hard peer to peer, player to coach, coach to player and program wide.

Q: How do you develop chemistry?
A: We do the Wildcat Games every year, an off-field competition. We break the team up into 10 small teams and compete in things. But frankly, the guys are just doing more together away from football. Our leadership council has made that a priority. More guys spending more time together. It?s a crazy concept.

Q: Have you been happy with how Kain Colter been looking as a passer?
A: Absolutely. Without a doubt. He is back and close to what we saw as a high school player after overcoming an injury as a senior. I have been very impressed with him so far.

Q: How are the receivers looking?
A: We feel like we have solid depth. A couple years ago, Tony Jones played for us as a true freshman and he redshirted last year because of injury. He is back. Rashad Lawrence and Demetrius Fields have played a lot of football. Look at the job a Christian Jones did for us last year as a freshman. Add (USC transfer) Kyle (Prater) to that mix if the waiver gets granted. Mike Jensen is a young man who has kind of evolved, a blue collar guy like an Eric Peterman or a Zeke Markshausen kind of player.

Because of injuries, I can?t really say who will be our next Super back (is to take over for Drake Dunsmore). Mark Szott had a shoulder we had to fix from high school. Tim Riley has been battling a hamstring. Evan Watkins had to have surgery last year after moving to tight end late last year. So, some of these pieces on offense we will have to evaluate early in fall camp.

Q: Can you put a percentage on the likelihood of Kyle Prater getting his waiver for immediate eligibility?
A: I can?t answer that. I have no idea. We are gonna work on precedent and his situation and present a picture to the NCAA on why we believe it should happen. It will take some time. We have some due diligence to do on our end.

Q: With Vince Browne gone, who will rush the passer?
A: Tyler Scott and Quentin Williams have played a lot for us. Both came on last year as the season went along. Anthony Battle and Davon Custis are starting to come along. And we have two freshmen I like a lot in Max Chapman and Deonte Gibson. So we have six guys who add some depth to us there.

Q: What needs to happen to improve the defense?
A: I think we can be improved. I think we can run. I think we have good length. Damien Proby, Roderick Goodlow, David Nwabuisi, Collin Ellis at linebacker, the position is more seasoned and can really be a solid four-man rotation. And we have competition in the secondary. The only one back with a lot of experience is Ibraheim Campbell and I thought he had a really solid freshman year. We will be young there but we will be athletic and can run and have size.

Q: Northwestern hasn?t had a 1,000-yard rusher since 2006. Can that change?
A: The ground game has been efficient and we run the ball better. It?s funny, your run game is solid if one guy runs for 1,000 yards but if three guys combine for that it isn?t.

Mike Trumpy was averaging 4.5 yards per carry before he got hurt. I think we are close. We have had some injuries. We learned a lot about Treyvon Green last year when Mike was hurt. Mike is still out with an ACL. Add Tyris Jones who is more of a thumper and Jordan Perkins and then some freshmen. We think we will have good depth in the fall.

Q: There is a movement to change the college football postseason, adding a plus-one system. Do you like that?
A: Maybe I am an old-school guy, but I think it?s all about the players? experience. I know there is a lot of money involved, but at the end of the day, it?s about what?s best for the student-athletes. If you play in the Rose Bowl, that means you will play 14 games. That?s a lot. I need to see more information to see if we would change what we have from a student-athlete experience standpoint.
I also believe in the bowl system. We have had a chance to be part of four in row. It has been unbelievable. Because we have played around January 1, the players have been able to go home for the holidays. And then they go to a place they may or not have ever have been with their families, faculty, staff and alums. It?s an experience that lasts long beyond the mundane of being a student-athlete.

I know there is a lot of outcry from fans for a playoff. Now, 64 teams get a bowl and 32 get a trophy. There is something special about that. If we want to the NFL, then we need to completely change our structure.