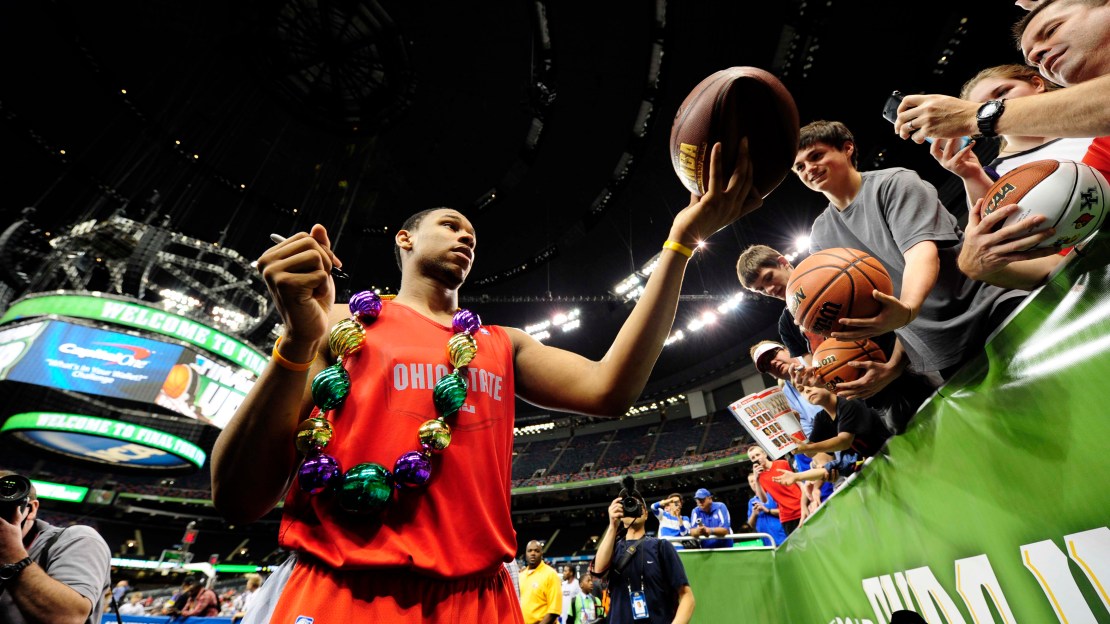 (AP) Welcome to "The Other Game" at the Final Four. OK, so, the Ohio State-Kansas matchup may not have the fantastic freshmen, the outspoken coaches or blood-feud story line of the opening semifinal between Kentucky and Louisville. But this one still should be worth a two-hour investment in front of the TV set Saturday night. Besides the chance to watch two top-line teams play for a spot in the national title game, the Buckeyes-Jayhawks game offers a rare opportunity to see two All-Americans going at it with everything on the line.

Ohio State is led by Jared Sullinger, the sophomore forward who missed the first matchup between these teams with a bad back. Kansas' best player is Thomas Robinson, who had 21 points and seven rebounds in the Jayhawks' 78-67 win on Dec. 10.

"In my eyes, he's the college player of the year," Sullinger said of Robinson. "I know some think different. But with his season, the way he took his team to the top, you've just got to give it to him."

In fact, it's Kentucky's Anthony Davis who took player of the year awards from The Associated Press and college basketball writers Friday. But while Davis is a story of an ultra-talented freshman trying to lead his team to a championship in what likely will be his only year with the Wildcats, Sullinger and Robinson approach college in a different way.

At one point last season, Sullinger was viewed as a surefire lottery pick, a one-and-done prospect with nothing much left to prove in college. He never saw it that way, however, and when Ohio State was eliminated from last year's tournament as a No. 1 seed, the 6-foot-9 forward committed to staying in college.

"I wanted to make a statement, that not everybody is using college basketball as a pit stop to go the next level," he said. "That there's more than money and endorsements. There's championships that you've got to win at every level. That's what I pride myself on. I've won a championship all the way from elementary to now. I pride myself on winning. That's the biggest thing. That's why I came back."

"Pride," was also one of the first words Robinson used when asked about his decision to return for his junior year.

He spent most of his first two seasons playing limited minutes behind the Morris twins, Markieff and Marcus. NBA scouts were telling Robinson he could be a first-round draft pick if he left.

"It was a pride issue," Robinson said. "I didn't want people to guess and be like, `I think he can play. We've seen glimpses.' I wanted to come back and prove to everybody that I'm a good player."

He did. Widely viewed in the preseason as a player who might nudge his way onto some All-America lists, Robinson outperformed the predictions. He averages 17.7 points and 11.8 rebounds a game and is learning the difference between coming off the bench as a role player and leading a team.

While Kentucky coach John Calipari, never one for understatement, said he thinks Game 1 will be played in the 90s, Las Vegas oddsmakers disagree. The over-under for Louisville-Kentucky is the exact same as it is for Ohio State-Kansas: 136.5. The Buckeyes are 2.5-point favorites over Kansas – a sign of how big a difference Sullinger and a neutral court mean in the eyes of the "experts."

Of course, both teams have changed considerably over the past three months.

"Guys were still finding their own way. Guys were trying to define their own role to the coaching staff," Ohio State coach Thad Matta said of the December meeting. "Eventually it hits and guys say, `OK, this is what I need to do.' I know that has been a big thing for us."

The game has other intriguing matchups, namely how the rematch between guards Aaron Craft of Ohio State and Tyshawn Taylor of Kansas will play out. In the first game, Taylor had 13 assists despite playing with a bulky brace on his knee. Craft had 11 points and six assists.

There's also the coaching matchup of Self, who snapped a 20-year title drought at KU in 2008, against Matta, who restored Ohio State's program after scandal during the Jim O'Brien era.

These are two programs with 62 wins this year and 24 Final Four appearances overall between them.

Ever the well-spoken diplomat, Sullinger naturally said he appreciated the intensity of Louisville-Kentucky.

"Two great coaches, two great basketball teams that are playing very, very well right now," he said. "But we can't focus on that game. Because if we overlook Kansas, we'll be packing our bags up and heading home."