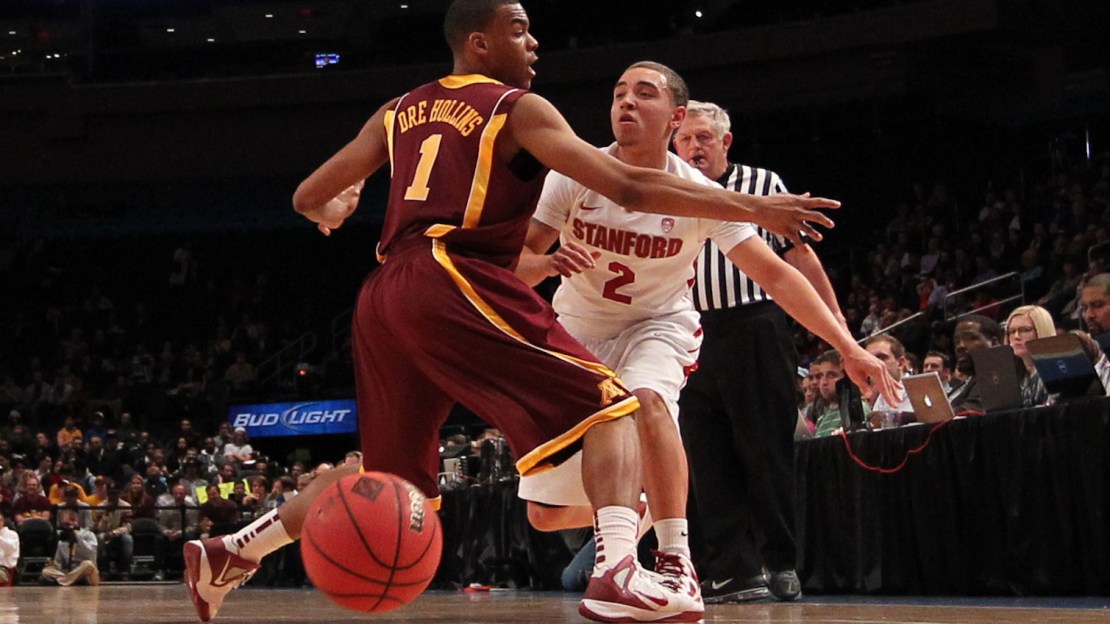 (AP) Stanford's young guards Chasson Randle and Aaron Bright each scored 15 points, and the Cardinal routed Minnesota 75-51 to win the NIT title Thursday night. Stanford forced two turnovers to open the second half to take a 10-point lead and stayed up by double figures the rest of the way. The Golden Gophers turned it over 22 times on the night. Rodney scored a team-high 12 points while Austin Hollins and Joe Coleman both added 10. Read the full AP recap, see the box score and get Tom Dienhart's analysis.

TOM DIENHART'S TAKE
Key player: Not many stars on this night, but Austin Hollins gets the nod after scoring 10 points with seven rebounds and two assists. The only other Gophers who scored in double figures were Rodney Williams (12) and Joe Coleman (10), as Minnesota had won six of seven before the loss tonight to salvage a season that at one point had the Gophers at 17-14.

Key stat: 21, turnovers for Minnesota. More astounding was the fact Stanford had 16. Not only did the Golden Gophers lose the turnover battle, but they got whipped on the boards, 37-29. And Minnesota also shot just 36.5 percent (19-of-52) compared to 50.0 percent (29-of-58) for the Cardinal. Stanford led 31-25 at halftime but broke open the game in the second half by outscoring Minnesota, 44-26.

What?s next for Minnesota: Yes, this was a tough way to end the season, but the Golden Gophers are primed to be good next season, only losing Ralph Sampson III. But he hasn?t played since March 3rd due to injury. The roster will feature talent like Andre Hollins, Austin Hollins, Elliott Eliason, Julian Welch, Joe Coleman, Chip Armelin, Oto Osenieks and Rodney Williams. Minnesota (23-15) will receive a huge boost if Trevor Mbakwe opts to return for a sixth season of eligibility, which the NCAA already has awarded him, after suffering a season-ending knee injury in November.

HALFTIME: Stanford will start the second half against Minnesota with the advantage after a first period with six lead exchanges ended at 31-25 in its favor. The Golden Gophers led 21-17 when the Cardinal went on a 12-0 run to take an eight-point lead. Stanford got points from seven different players. Minnesota shared the ball, finishing with six assists on nine field goals in the first half. Stanford's Aaron Bright already has eight points and three assists. The Golden Gophers' Rodney Williams had a big first half, with 12 points.