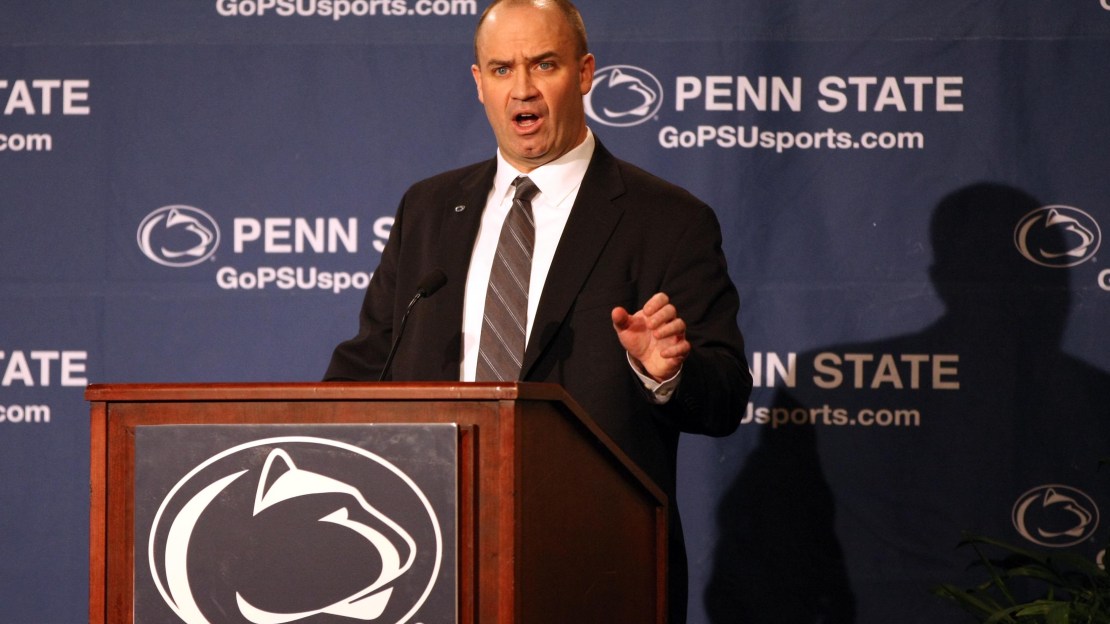 For the first time since 1965, Penn State will have a new coach prowling the sideline. Joe Paterno was forced out amid scandal late in the 2011 season-and subsequently died. In steps Bill O?Brien, a first-time head coach who comes freshly minted from the New England Patriots, where he served as offensive coordinator for arguably the NFL?s top franchise.

Paterno was in his fourth season as Penn State head coach when O?Brien, 42, was born in 1969. O?Brien last coached in college in 2006, when he was offensive coordinator for Duke under Ted Roof-now Penn State's defensive coordinator–before leaving for New England.

Here?s what three top Penn State writers think O?Brien and the Nits need to work on this spring:

Bob Flounders, Harrisburg Patriot-News | Read more from Flounders | Follow @BobbyFlo7
?They have a problem at defensive end. They lost them both, Jack Crawford and Eric Lattimore. Pressure is a big deal in today?s game. They don?t have a lot of options (at end) in the pipeline who have played a lot. Sean Stanley is a bit undersized. They also have Pete Massaro. He looked to have the makings of a good end a few years ago. But he blew out a knee in spring drills in 2011 and missed last year. He had torn the ACL in the other knee a few years earlier. So he is playing on two rebuilt knees. You never know how he will come back or how the knees will hold up.

?Quarterback is pressing. They have some experienced guys in Matt McGloin and Rob Bolden. It was pretty clear at the end of last year that even though McGloin was pretty limited physically in what he can do, I think he?s the better option over Bolden. But there?s a chance Penn State could land the Maryland transfer, Danny O?Brien. I think Penn State is a definite possibility because of the offense O?Brien wants to run. I think Penn State will be a finalist for his services and I think that would be a considerable upgrade given what Penn State has had the last few years in McGloin and Bolden. I know O?Brien had a tough time last year at Maryland, but he was running a different offense than he had two years ago. So, there?s a chance the quarterback spot could get a boost if he goes to Penn State. I also don?t think O?Brien will hesitate to turn to incoming freshman Steven Bench from Georgia if he sees McGloin and Bolden won?t be the guys even though Bench isn?t an early enrollee.

?The secondary is the biggest issue on defense. They were exposed in the bowl loss to Houston. Compounding the problem, not only were they exposed, but they lost all four guys from that secondary. Both safeties: Nick Sukay and Drew Astorino; and Chaz Powell and D?Anton Lynn at corner, who probably was their best player in the secondary. Corner Stephon Morris and safety Malcolm Willis each has a bit of experience and ability, but they aren?t real deep in the secondary. In today?s game, you have to be able to play five, six defensive backs. Adrian Amos, he is a physical specimen who played well in spots last year. He has a chance to be good. But after those three, they have some issues after that. I don?t know how well they will be able to matchup. And Penn State always plays that Cover 3, soft-zone look, and you can kinda mask some deficiencies when you play that because you aren?t asking players to cover a lot. They will play off and make the tackle. But I think Ted Roof wants to play a lot more man. If that?s the case, they need to find some players in a hurry who can cover.?

Cory Giger, Altoona Mirror | Read more from Giger | Follow @CoryGiger
?They have three competing at quarterback in (Matt) McGloin, (Rob) Bolden and (Paul) Jones. And they may get (Maryland transfer) Danny O?Brien. If that happens, you will likely see a Russell Wilson situation. If he comes, I can?t imagine he will come here unless he feels like he has a good shot to play. Bill O?Brien needs to find out which one of those quarterbacks fits his system best and who can make the throw and who he trusts.

?They need depth on the offensive line. It has been a problem for a lot of years. They almost never are consistent. It takes guys a long time to develop. And there have been a number of good recruits who haven?t developed. Now they have Mac McWhorter (as offensive line coach). And they have just one returning starter in Matt Stankiewitch. They need depth and to build strength. They have a new strength coach and are going with more of the free weights and getting rid of the exercise machines. One of the benefits may be more explosiveness off the ball.

?The defense needs to get used to a new coordinator in Ted Roof. Ron Vanderlinden is back coaching linebackers and Larry Johnson is back coaching defensive line. And each is two of best in the country at their position. But they need to learn a new system under Roof, who is more aggressive and likes to blitz linebackers and play maybe more man coverage. They lose all four starters in the secondary, so they need depth and to find which younger guys can fill in and play. They want to go to some man to man after playing a soft zone here for a long time. But they need to find corners who can lock people up.

Mark Brennan, FightOnState.com | Read more from Brennan | Follow @MarkXBrennan
?Watch the quarterback situation. To what extent can they get that cleaned up after what transpired last year is really important. It was an issue all year. Is the answer on campus? Is it the recruit (Maryland?s Danny O?Brien) possibly coming in? What kinda shot do they have at O?Brien? They have to figure out from among (Matt) McGloin, (Rob) Bolden and (Paul) Jones who their first couple of options are going forward.

?They lose some guys on the offensive line. No one was fantastic. I think (guard) Johnnie Troutman is the only guy with a chance to be drafted. But this really hasn?t been a great area most of the time the last eight-10 years. There have been years here and there when it has been good. But overall, it hasn?t been. I?m anxious to see what changes the new staff makes and who is gonna step up. They have some young talented kids like Donovan Smith. (Guard DeOn?tae) Pannell, (tackle) Quinn Barham and (tackle) Chima Okoli are gone along with Troutman. They haven?t done a good job of putting linemen in the NFL. I?m not saying that?s a good indicator of how good college line is.

?But they haven?t had the same success as they have had with defensive linemen. That?s one of the reasons why Larry Johnson is still on staff. He has done a good job developing defensive linemen. They should be OK up front on defense even without Devon Still and the two ends. Jordan Hill was one of the more underrated guys on the team last year and in the Big Ten. He is a really good player. (Jack) Crawford and (Eric) Lattimore weren?t great, but they were functional players. Both are gone. But Pete Massaro is back at end after missing last year with a knee injury. Sean Stanley has played a lot at end and there are some other good players.

?Who will take over for Still? James Terry has played a lot. And DaQuan Jones has played a lot. Still was really good but wasn?t at full strength the last four games with a turf toe. They are deep every year on the line. Larry Johnson has done a good job developing players.

?At linebacker, they have put a lot of guys in the NFL — Sean Lee, Navorro Bowman, Dan Connor, (Paul) Posluszny. And they have a couple more now with Gerald Hodges and Michael Mauti (who missed most of last year with a knee injury).

?The secondary is what everyone is wondering about. I don?t know if any will be drafted. The guy back with a lot of experience is Stephon Morris at corner. He has been a part-time starter. Adrian Amos has played some corner and is big and may be a safety. I don?t know what they will do at corner. They have some options at safety, Malcolm Willis is one. But at cornerback, it looks like they have just one guy with experience who projects as a pure corner, and that?s Morris.?