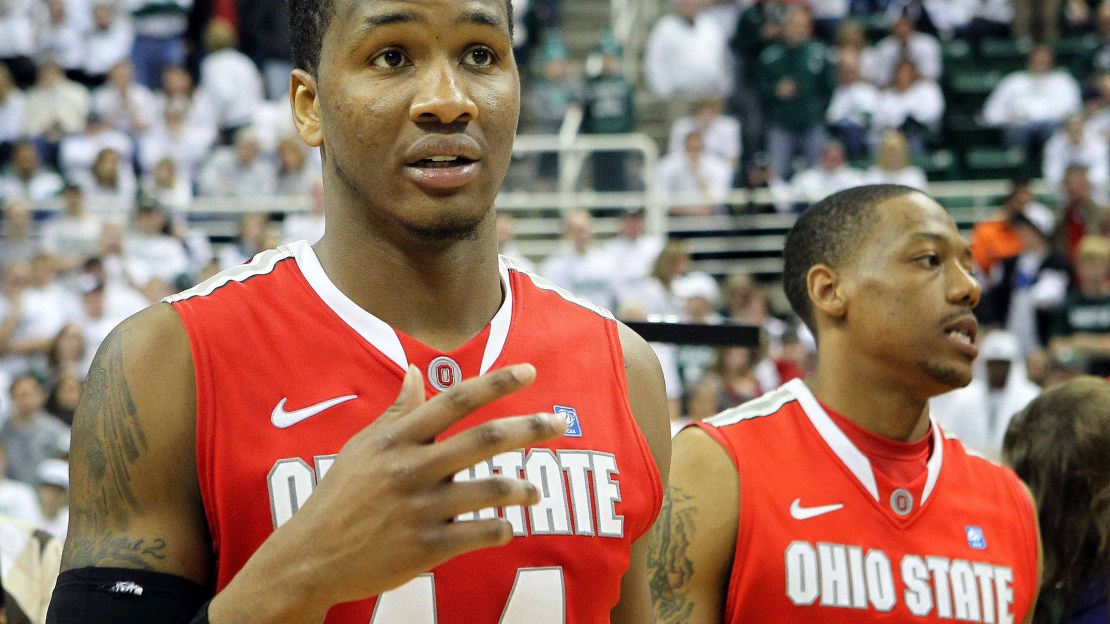 (AP) When it comes to unpredictable, game-changing performers at a Final Four, most of the time the discussion revolves around a precocious freshman. Ohio State fans, however, have grown accustomed to warily keeping an eye on the Buckeyes' lone senior. Which William Buford will show up?

Will it be the one who lit up Purdue for 29, Northwestern for 28, Kansas for 21 in the first meeting and Duke for 20? The cool team leader who hit a nerveless shot at the buzzer with a hand in his face to earn the Buckeyes a share of the Big Ten title at Michigan State?

Or the one who is shooting 34.7 percent from the field over the last seven games – arguably the Buckeyes' seven biggest games to date – while averaging 11.3 points, 3 under his average?

No one doubts that Buford can decide the outcome of a game.

The problem is that works both ways.

"He's made more big shots – more perimeter shots for sure – than anybody playing in the tournament, without question," said Kansas coach Bill Self, whose Jayhawks take on Buford and the Buckeyes in the national semifinals on Saturday night. "I wouldn't even think that that's close."

But it was also Buford who had a miserable game in last year's round of 16 – hitting just 2 of 16 shots from the field and missing a hurried but wide-open 3 at the buzzer – as the top-ranked and top-seeded Buckeyes were ousted from the tournament by Kentucky, 62-60.

Buckeyes coach Thad Matta recognizes that many, many fans remain less than confident in Buford's ability to have a big game in a pressure-packed environment like the NCAA.

"For William, anytime there appears to be trouble, the blame has to go somewhere," he said. "Like I've always said, I wish it would go to me and not the players."

Yet Buford is only concerned about the bottom line. He doesn't appear to ever take the public criticism to heart.

Asked about the highs and lows of his erratic season, Buford doesn't address any personal disappointments.

"My teammates, they always try to lift me up when I'm having bad games, but when we lose that's the worst part," he said. "When we're winning, of course, that's the high."

"When Will knows he's not having a good shooting night or they're guarding him tough, he does other things," Sullinger said. "He's always helping on defense, passing the ball, getting rebounds and making hustle plays. Scoring does not define William Buford any more. He has an all-around game."

Even before the first practice this season, Buford said he was still haunted by how poorly he played in the season-ending game last year.

He said he felt good about his career to that point.

"Yes, except my last game," he said last October. "I got over it a little over the summer. It's still with me, but I just don't worry about it too much now. I just won't ever let that happen again."

The thing is, he's been shaky when shooting the ball recently. At the regional last weekend in Boston, the Buckeyes' third-leading scorer was just 1 of 8 with 4 points in an 81-66 victory over downstate rival Cincinnati. Then, with a trip to the Final Four on the line and Sullinger saddled with early foul trouble, Buford faltered again against top-seeded Syracuse. He was only 3 of 12 from the field, although he did finish with a respectable 13 points and nine rebounds.

He is grateful that others have picked up the scoring slack.

"(My teammates) have been playing great in March," he said. "When I do have a bad game, we still end up winning because we're more together than we were at the beginning of the season when things like that would happen."

The soft-spoken and self-effacing Buford is Mr. Dependable off the court, with the younger players teasing him while also looking up to him. He also can be the very picture of a money player, such as when he took it upon himself to hit the biggest shot of the season, quieting that raucous crowd at Michigan State.

Watch the game-winner at Michigan State below:

"People can say (he's) erratic. Sometimes that happens when you have guys that score the majority of their points outside the paint," said Self. "But to me, over the course of his career, he's been a model of consistency as far as how he scores the ball and performs for Ohio State. He's the fourth-leading scorer in the history of the school, which is remarkable, because they've had some hard-rockin' guys come through there."

Matta refuses to pay any attention to Buford's critics.

"Just because somebody shoots a layup in the warmup line of a JV game (earlier in their life), that gives them an opinion on what you're trying to do," he said dismissively.

Meanwhile, Buford perseveres. He's thrilled to be headed to New Orleans. He clearly enjoys the time he spends with the other Buckeyes, particularly now.

"I'm happy. We're winning. We're in the Final Four," he said. "So as long as we're winning and I'm doing whatever I can do to help my teammates win, that's all that matters to me. It doesn't have to be scoring."