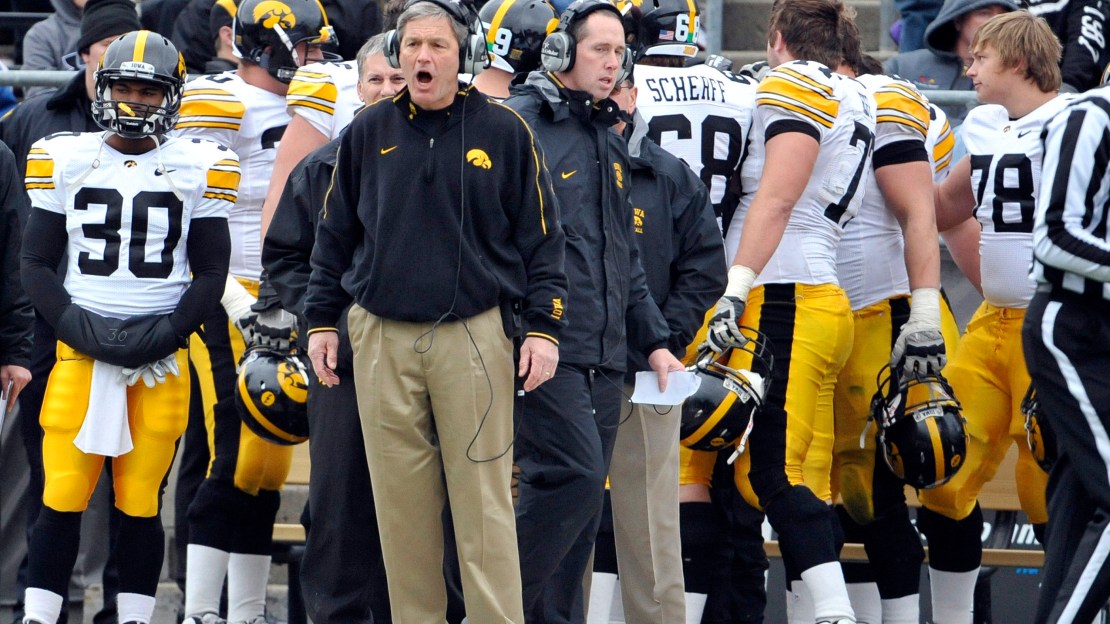 Who is the longest-tenured coach at his Big Ten school? It?s Iowa?s Kirk Ferentz, who is entering his 14th season in Iowa City. And as he embarks on another spring practice, he faces a unique set of challenges he never before has encountered. Chief among the challenges is developing chemistry on a coaching staff that long has been a beacon of stability but has been shaken up like never before on Ferentz?s watch. On top of the staff overhaul, Ferentz also has some key personnel issues to deal with this spring. I caught up with the Iowa coach this week to discuss those issues-and others.

Gone are long-time coordinators Ken O?Keefe (offense) and Norm Parker (defense), who each was at Ferentz?s side for all 13 seasons in Iowa City. O?Keefe took a job coaching receivers with the Miami Dolphins, while Parker retired.

Ferentz promoted defensive backs coach Phil Parker to run the defense. Ferentz went outside to tab Greg Davis-who ran Texas? attack from 1998-2010 but didn?t coach in 2011–to coordinate the offense. Also, Brian Ferentz, Kirk?s son and an ex-Hawkeye offensive lineman, was brought in from the New England Patriots to coach the offensive line, while former Hawkeye linebacker LeVar Woods was promoted from a non-coaching role to take over linebackers. Lastly, Reese Morgan moved from offensive to defensive line coach.

Got all of that?

Q: What do you want to accomplish this spring?
A: We are a pretty young team, so we want to get everyone lined up right. Like every spring, you have areas you are watching hard to see that they come along. Our two most inexperienced areas are defensive line and receiver. And running backs are right in there, too. And it has been a little different for us overall because of the changes on our staff, so we have a lot of newness there, too. It?s something we are trying to work through.

Q: What do you think of the staff?
A: On defense, we had several good choices internally and just ended up going with Phil (Parker). His experience in the program is great. I have been very impressed with everything he has done over 13 years here. We aren?t looking to reinvent the wheel defensively. But we probably will make some tweaks and adjustments, and Phil had some ideas. I think the whole staff has done a good job working together looking at some things we may want to experiment with. I have been really impressed with Phil?s teaching ability and his leadership qualities. His position players always have had great respect for him and responded to him. And I think we?ll see the entire defense do the same thing for him.

Q: What do you like about Greg Davis?
A:Everyone I talked to just talked about the quality of person he is. I think the success he has had as a coordinator is pretty well documented. Just look at the numbers and the things that he has done at all stops (Texas; North Carolina 1996-97; Georgia 1994-95; Arkansas 1992-93; Tulane 1985-91; Texas A&M 1978-84). It?s impressive. The thing that stood out for me as much as anything is the fact he has done it with different types of personnel. He coached Vince Young and Major Applewhite, two very different types of quarterbacks. Also Colt McCoy and Eric Zeier at Georgia. Just the ability to be very flexible and make the system work regardless of what the player?s strengths are. That impressed me a great deal. I obviously knew Phil, but Greg isn?t a guy I knew well. I knew him casually. Some people I trust a great deal had great things to say about him as a person and teacher. And in a month?s time working with him, I?ve seen all those things very clearly, so I am very thrilled.

Q: What?s it like to have your son staff?
A: Hopefully good. He calls me ?Coach? in the building. And probably a few other things right now, but not to my face. It has been good. It?s something he has wanted to do. I thought it was important that when he got done (playing at Iowa), that he get out of this building and get exposed to some different systems. He spent a year in Atlanta as a practice squad player and has been in New England for a significant amount of time (2008-11). He worked in different jobs at different levels up there, starting with menial dirty jobs. But those are great experiences and he has been to a good graduate school in the last few years in New England. I?m excited to get him back and I feel the same about LeVar (Woods). They are two guys who played in our program. I think they are excellent young people with good teaching skills. When you are a former player, I think it means a little bit more to you, too. There?s a special thing about that.

Q: Who will be the leaders of this team?
A: The two James on offense, (quarterback) James Vandenberg and (center) James Ferentz. They are our most experienced players. And (fullback) Brad Rogers. He has had an interesting and challenging 18 months (heart ailment). It?s great to get him back to where he is fully healthy. He?s really a great young man. On defense, it starts with (cornerback) Micah Hyde. We also are looking to (linebackers) James Morris and Christian Kirksey. They only are going into their third years but they are veteran players now. (Defensive lineman) Steve Bigach up front is one of our few seniors coming back.

Q: What facility work is going on?
A: It looks like a war zone on both sides of us. One is a hospital project on the east side of the building. On the west, the indoor facility is going up. It has been neat. In about the last six weeks, they put some of the first beams up and you can actually see what it?s going to look like. That?s exciting. That will be complete in the summer, and they will continue on with our operations building. We all are very enthused about that, especially the younger guys who will see it all come to fruition.

Q: Did you like your first taste of division play last season?
A: I didn?t know what to expect. From a schedule standpoint, it didn?t feel a whole lot different. And it really isn?t. You still are playing eight (league) games. But what I think is interesting is it dawned one everyone as the season got going in that you are playing for a chance at a bid to the title game. I think it adds another exciting dimension. I think it?s all positive.

Q: There is a lot of talk about college football changing its postseason by adding a plus-one playoff element. What would you think of that?
A: My sense is the plus-one system is gonna happen. I think there are a couple different models out there to consider how they are going to do it. If it?s not this year, I think it?s gonna be in the near future. The change is coming down the track. And I think that will be a positive. I?m not sure I?d like to see it go beyond a plus-on. I hope that?s where it ends, quite frankly.