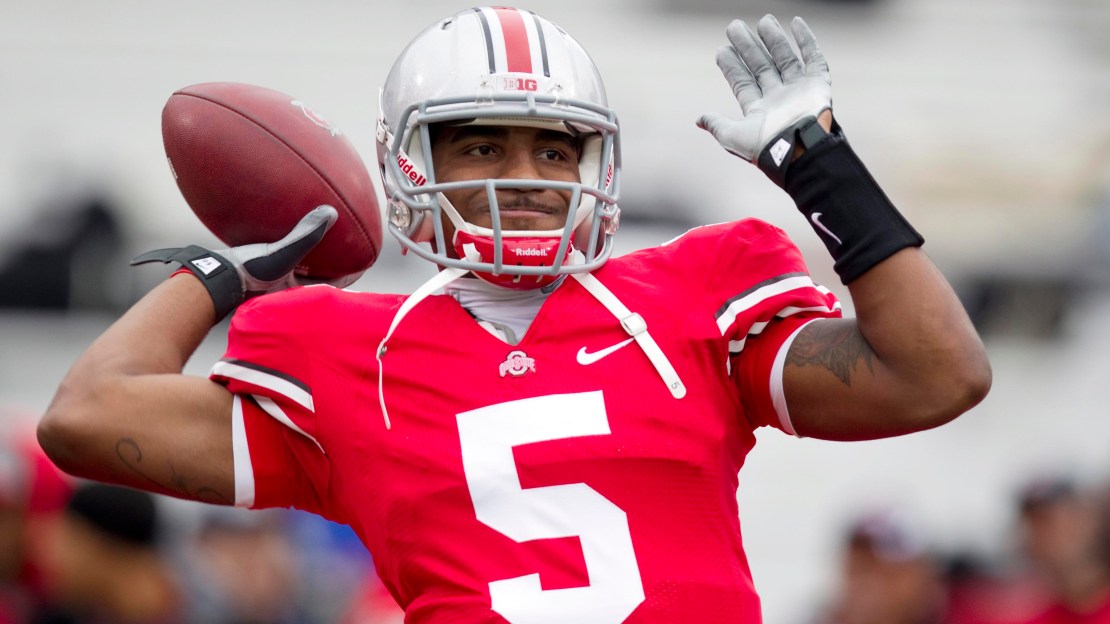 The Urban Meyer era has dawned at Ohio State. And with it comes big dreams-national championship dreams. Why not? Meyer led Florida to BCS titles in 2006 and 2008. Yes, Ohio State is ineligible for the Big Ten title and a bowl this season as it serves probation incurred under Jim Tressel. But Meyer still wants to lay the foundation for future greatness for a team that went 6-7 last season, the program?s first losing season since going 4-6-1 under John Cooper in 1988 and the school?s first seven-loss season since 1897.

It all begins this spring for a team that may be the most talented in the Big Ten. I talked to three writers who cover the Buckeyes to get their thoughts on what Ohio State needs to accomplish this spring.

Tim May, Columbus Dispatch | Read more at BuckeyeExtra.com | Follow @Tim_MaySports
?The skill positions on offense, other than Braxton Miller, are the big question-especially the receivers. The top receiver last year caught 14 passes. During winter drills, the coaches have been after those guys to step up. They need to be leaders and also understand they will play critical roles in what their plan is.

Look at (receivers) Corey ?Philly? Brown, Devin Smith, Evan Spencer and Chris Fields, those are the guys who are back who caught balls last year. They are looking for one of those guys to excel. I think they think Philly Brown is a guy they think can make a major step this spring. He was more of a running back than receiver in high school. He was kinda like Percy Harvin in how he was used. The new staff may be eyeballing Brown for some role in that regard. It?s a different offense with elements of the spread in it. They are looking for those guys to step up in the spring.

?On defense, they ran out of linebackers last year, or at least quality linebackers because of injuries. I think they will be pretty good on the defensive line. Linebacker is where they need some guys to come around. (Etienne) Sabino is back. He had a pretty good bowl against Florida. They think he can be pretty good. The kid who has everyone?s eye is Ryan Shazier. He was a freshman who was playing great until he hurt his knee. He played against Michigan on one leg and was the best they had. His knee has come around and they think he can be a real star. Storm Klein can be pretty good. But they are looking for a couple more people to step up from a depth standpoint. Luke Fickell will coach linebackers with Mike Vrabel moving to defensive line. It will be interesting to see how Fickell brings guys along.

?The defensive line could be really good. Meyer raves about Johnathan Hankins. He has lost even more weight and is slim and trim and more muscular. He has a huge upside. I thought Michael Bennett was underrated as a freshman last year. He has that mean streak in him. Nathan Williams was the guy they missed more than anyone on defense last year. He hurt his knee in the first game and never came back. The really missed him at the ?Leo? (linebacker/end) position and weren?t as dynamic without him. Urban Meyer loves John Simon at tackle and end. He?s a big-time effort guy like a Howie Long. They feel really good about the line.?

Doug Lesmerisis, Cleveland Plain Dealer | Read more at Cleveland.com | Follow @PDBuckeyes
Getting their hands on Braxton Miller for a full spring is big for the new coaches. They love the kid and his competitiveness and skill set, but they need to get rolling with him on their offense. Getting him developed into their way of being quarterback is a big thing for them.

?But Meyer does not like the skill-position guys. He hasn?t been shy about saying that. He has wondered who is gonna catch the ball because the receivers last year were pretty terrible. DeVier Posey was the best guy and he didn?t play practically the whole year and now he?s gone. Corey ?Philly? Brown is the top guy back, but he always has had issues with his hands. Devin Smith and Evan Spencer played a bit as true freshmen last year and are probably the second and third guys right now. For a place that has put out receivers like Santonio Holmes, Anthony Gonzalez, Ted Ginn, Jr. Terry Glenn, David Boston, you know the list, this is not a great receiver crop.

?Depth on the offensive line is an issue with three senior starters gone, so there?s lots of competition. There will be some young guys who factor in at tackle. Watch Reid Fragel, a senior who was a tight end but is moving to tackle. He?s 6-8, 300. He will be in the mix to start at tackle. Meyer talks about long, lean angular tackles who are good athletes as opposed to big bruisers with guts. Fragel fits that look. He always was a good blocking tight end. They need him to make that switch to tackle. It?s a big deal.

?They need linebackers. In my ideal world, sophomores Ryan Shazier and Curtis Grant would be starters. Grant was a five-star recruit last year. He is a great athlete but coaches say he didn?t pick up the defense quickly which limited his playing time and limited him mostly to special teams. He?s still a great talent. How can Grant progress? (Etienne) Sabino and (Storm) Klein are seniors coming off average years at best after splitting the middle linebacker spot, and then Shazier took over late. Can one of the two step up and grab a job? They are in nickel so much, there really are only two starting linebacker jobs. The other linebacker is a fifth DB half the time. Shazier will start for sure. And then other slot is between Grant and the two seniors.?

Kevin Noon, BuckeyeGrove.com | Read more at BuckeyeGrove.com | Follow @Kevin_Noon
?They need the safeties to come through. I?m not sure how convinced Meyer is about the safeties. Christian Bryant and C.J. Barnett still have something to prove in the secondary for this defense. I like the corners. Bradley Roby was a real surprise as a freshman last year. Travis Howard is a solid veteran.

?We all know about the linebackers. This group has work to do. Ryan Shazier came on last year as a freshman and really looked good. He has a bright future. Etienne Sabino and Storm Klein could be good as seniors. Curtis Grant was a highly-touted freshman who just got his feet wet last year. He needs to take the next step in his development.
?On offense, who will catch passes? Chris Fields, Philly Brown, Verlon Reed, Devin Smith, guys like that need to come on.

?Urban Meyer is trying to change the look of the offensive linemen, wanting agile and shifty blockers for his spread scheme. Losing the center (Michael Brewster) and both tackles (Mike Adams and J.B. Shugarts) hurts. But I like their options. Andrew Norwell will be a good tackle, and the staff is converting Reid Fragel from tight end to tackle and it is going well. Brian Bobek will be good, too.?