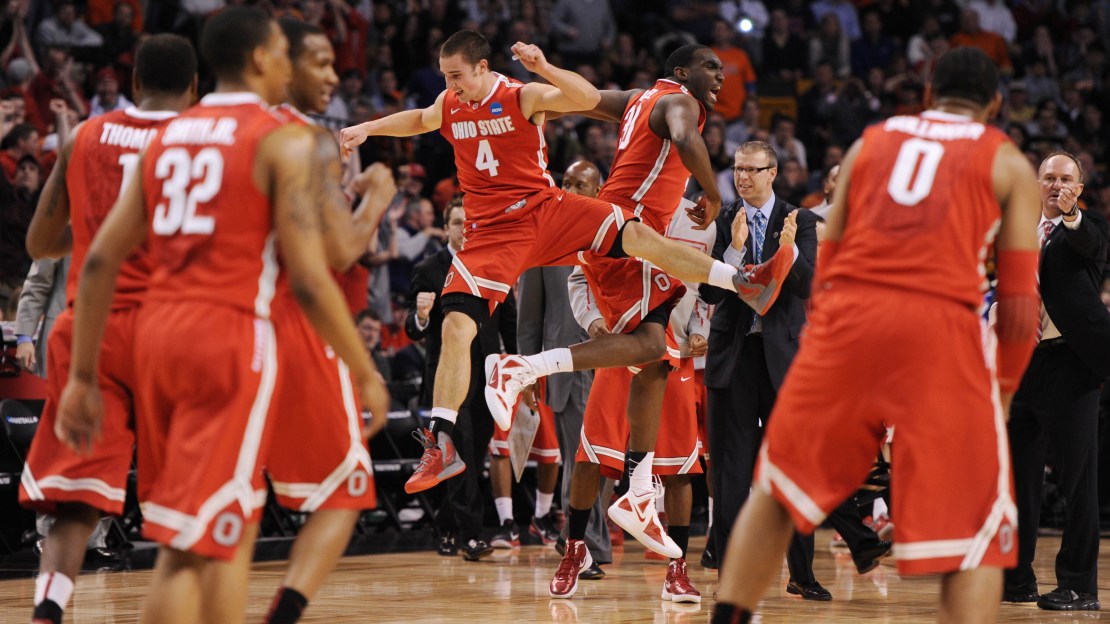 Ohio State was our preseason pick for the cream of the conference, and, despite a bumpy Big Ten slate that left them sharing the title, the Buckeyes are now the last B1G standing. The Sweet Sixteen was rather cruel to Big Ten teams not from Columbus; let's start with the happy news and work our way through the rest.

Ohio State first handled a resilient Cincinnati squad with a magnificent offensive display, shooting 47 percent on threes and taking excellent care of the basketball. The Buckeyes posted the second highest efficiency allowed by Cincinnati all season, and it propelled them to a 15-point win. In true Thad Matta fashion, Ohio State used only 20 minutes from bench players, though it should be noted that Shannon Scott's +/- was +15 in the 16 minutes he played. In other words, the two teams were dead even when Scott wasn't on the floor. This was mostly owed to the lackluster play of William Buford, who shot one for eight from the field and turned it over four times. For a team that gets criticized for having no depth, it was mpressive to win so easily without one of its big guns producing.

In the Elite Eight, Ohio State faced another tough Big East defense, this time in the form of Syracuse's vaunted 2-3 zone. The Buckeyes struggled to navigate the zone in the first half, falling victim to the usual Orange pitfalls–namely, poor shooting and too many turnovers. The saving grace was that Ohio State's defense had done an equally great job, resulting in a halftime tie.

After the break, the Buckeyes figured the zone out, scoring 17 points on the first 10 possessions of the second half. The points came mostly from free throws and layups, and suddenly Ohio State held a double digit lead. As good teams do, Syracuse responded, cutting the advantage to a single point on multiple occasions but never quite getting over the hump. The offensive display from the Buckeyes in the second half was mighty impressive:

There's been a fair amount of harping about the officiating in this game–Syracuse's student newspaper even ran an article about it, using the foul and free throw counts to imply that the Orange got the short end of the stick. While the game certainly had more than its fair share of questionable calls, to imply Ohio State had a big officiating advantage just doesn't add up. For one thing, the numbers prior to the game would have plainly suggested that the Buckeyes would shoot more free throws. For the season, Ohio State has been better than Syracuse at both ends as pertains to free throw rate. If you take away the 14 free throws that the Orange intentionally gave the Buckeyes over the final 68 seconds, there isn't much of a discrepancy at all. Furthermore, I find it hard to argue that a team got a huge officiating advantage when its best player (Jared Sullinger) spent nearly 14  first half minutes on the bench in foul trouble. There's just nothing here.

For the third straight game, William Buford struggled with his shot, going three for 12 from the field. Unlike in the Sweet Sixteen, however, Buford contributed in other ways, grabbing nine rebounds and turning it over just once in his 40 minutes. It's mighty impressive how well Ohio State's offense has been playing without getting much from Buford. If he can get rolling in New Orleans, there's no reason the Buckeyes can't win the whole thing.

Ohio State only faced Syracuse in the Elite Eight because Wisconsin came up just short in a Sweet Sixteen upset bid. The final score was 64-63 in favor of the Orange, and the low point total betrays just how efficient these two teams really were. The game was played a 52-possession crawl, meaning Wisconsin posted the highest output allowed by Syracuse all season (1.20 points per trip). It was, as you'd expect, three-point shooting and a low turnover rate that buoyed the Badgers, as they shot over 50 percent from beyond the arc and made just six miscues. Unfortunately, the Orange couldn't be stopped either, shooting 55 percent on both twos and their carefully-selected threes.

The slow tempo masks how incredibly effective both Jordan Taylor and Jared Berggren were. Each player scored 17 points and turned it over just once. Taylor's spectacular college career came to an end with his missed desperation three, but Wisconsin will carry on as they always do under Bo Ryan.

Michigan State saw its recent offensive roll come to a screeching halt against a fantastic Louisville defense in the Sweet Sixteen. Not only did the Spartans have a bad offensive night, they posted an efficiency only decimal points better than that from their dismal 42-41 loss at Illinois. Nothing worked against the Cardinals, and the lack of offensive rebounds since Branden Dawson's injury came home to roost. It was a sad way to see Draymond Green's college career come to an end, as the do-everything senior finished with 13 points, 16 rebounds, and six turnovers. If you believe in objective measures, Green probably deserves to be National Player of the Year. He'll likely have to settle for being the KenPom POY.

Indiana put up a good fight against Kentucky in the Sweet Sixteen but just couldn't come up with any stops. These Wildcats are clearly the class of college basketball right now, so to even be within single digits of them in crunchtime is an accomplishment. Still, this game illustrated the big question mark when it comes to projecting Indiana's 2012-13: defense. Kentucky scored an unreal 1.40 points per possession, and that was without much help from the three ball. Sure, that's a fantastic offense filled with future lottery picks, but the Hoosiers will have to figure out the defensive end if they hope to take the next step into Big Ten title contention. Christian Watford and Cody Zeller combined for 47 points, but it wasn't nearly enough.

So here we are. College basketball's 345 D1 teams have been whittled down to four. It's been a great ride, and we still have three tantalizing games to go to crown a champion. The Big Ten has proven its worth as the nation's top conference two years running, but it's been 12 long years since Michigan State cut down the nets. Do us proud, Buckeyes!