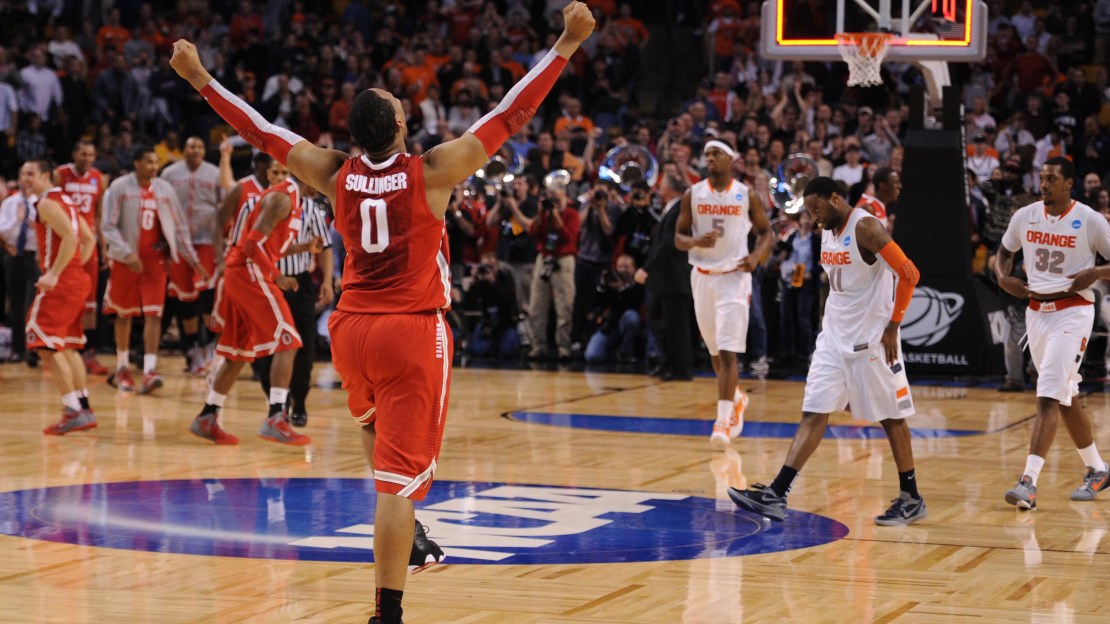 (AP) Jared Sullinger recovered from first-half foul trouble to score 19 points and grab seven rebounds, helping Ohio State beat Syracuse 77-70 on Saturday to advance to the Final Four. It will be the Buckeyes' first trip to the NCAA semifinals since 2007. Deshaun Thomas scored 14 with nine rebounds for Ohio State (31-7), which led by eight points with 59 seconds to play and held on after the Orange cut it to three. The Buckeyes made 13 of 14 free throws in the final 68 seconds. Read the full AP recap, see the box score and get Tom Dienhart's analysis in this post.

On Friday night, Indiana's miraculous turnaround season ended against No. 1 overall seed Kentucky (recap), one night after Wisconsin and Michigan State fell in the Sweet 16. View the interactive NCAA bracket.

Key player: Jared Sullinger. The super soph had just four points at halftime as he was forced to sit most of the first 20 minutes saddled with two fouls. But Sullinger came on in the second stanza to help Ohio State pull away from a game tied 29-29 at halftime. Sullinger hit 5-of-9 shots from the filed did most of his damage from the free-throw line in hitting 9-of-12 en route to finishing with a game-high 19 points. He also had seven rebounds. Like Sullinger, Lenzelle Smith, Jr., had a big second half. He tallied just two points in the first half put poured in 16 in the second half for an Ohio State squad that had four double-figure scorers.

Key number: 37, rebounds for Ohio State, compared to 22 for Syracuse. No doubt, the Orange missed big man Fab Melo-declared ineligible prior to the tourney–in the paint. Not only did the Buckeyes (who had 13 offensive rebounds) dominate on the glass, they also used their big men in the paint to draw fouls. Ohio State hit 31-of-42 free-throw attempts; Syracuse knocked in just 20-of-25. That, ladies and gentlemen, was the difference in the game.

What?s next for Ohio State: The Buckeyes are off to the Final Four for the first time since 2007, when Greg Oden and Ohio State lost to Florida in the national championship game. When the season began, this is where many people believed the Buckeyes would be. And this trip to New Orleans for the Final Four erases the bad memory of last season, when the Buckeyes lost in the Sweet 16 to Kentucky after entering the tourney as the No. 1 overall seed. Ohio State will meet the winner of the No. 1 North Carolina-No. 2 Kansas game as it aims for the school?s first national title since Fred Taylor led the Buckeyes to the promised land in 1960 with a win over California and coach Pete Newell. Ohio State lost at Kansas earlier this year, 78-67, but the Buckeyes played without an injured Jared Sullinger.

FINAL: Jared Sullinger scored 19 points and pulled down seven boards to lead No. 7 Ohio State to a 77-70 win over No. 2 Syracuse on Saturday at TD Garden in Boston in the Elite Eight. Ohio State also got solid contributions from Lenzelle Smith Jr. (18 points), Deshaun Thomas (14) and William Buford (13) on its way to advancing to the Final Four. Scoop Jardine contributed 14 points and contributed six assists for Syracuse (34-3). The Orange hit 6-of-16 threes for a 38 percent and went 20-of-25 from the charity stripe (80 percent). More Syracuse scoring came from Kris Joseph, who scored 10 and Brandon Triche, who scored 15. The Buckeyes won the rebounding battle, 37-22.

HALFTIME: At halftime, No. 2 Syracuse and No. 7 Ohio State are all knotted up at 29. Ohio State had eight players score and Syracuse had seven in a back-and-forth first half. The Buckeyes are tied despite star Jared Sullinger playing only six minutes due to early foul trouble. Deshaun Thomas and William Buford pace Ohio State with six points apiece. Syracuse's Scoop Jardine has a game-high seven points.