End of the Road: Wildcats Knock Hoosiers Out 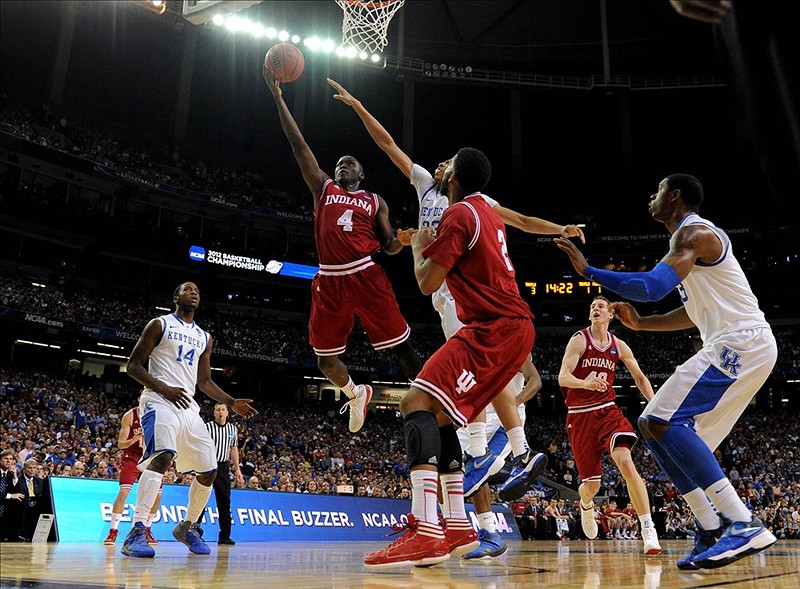 Michael Kidd-Gilchrist scored 24 points and grabbed 10 rebounds to lift Kentucky to a 102-90 win over Indiana on Friday at Georgia Dome in Atlanta in the Sweet Sixteen. Christian Watford had 27 points to lead the Hoosiers (27-9), whose comeback season ended two wins shy of the Final Four. Indiana, which won a total of 28 games the previous three seasons, has regained its usual place among the college basketball bluebloods. Full boxscore is here.

BTN.com senior writer Tom Dienhart writes in this post that Indiana lived and died with the three-pointer this season, and on this night the Hoosier shots just didn't fall. Read his takes now.

Tom Dienhart's Key Player: Christian Watford loves to play Kentucky. The 6-9 forward hit the game-winning shot in the waning moments in a scintillating win over the Wildcats in December in Bloomington, finishing with 20 points and five rebounds in the 73-72 victory.

On this night, the junior tallied a career-high 27 points with five rebounds, two assists, two blocks and a steal, but it wasn?t enough on this night vs. the No. 1 seeded Wildcats. The 102 points were the most Indiana ever has allowed in an NCAA game on a night when UK star Anthony Davis had just nine points but notched 12 boards and three blocks.

Tom Dienhart's Key Number: 27.8, the Hoosiers? 3-point shooting percentage. Indiana lived and died with the 3-pointer this season. And they weren?t falling tonight, hitting just 5-of-18. Another big key: Kentucky made more free throws (35-of-37) than Indiana attempted (13-of-17). Indiana also was hurt by getting just six points (all from Remy Abell) from the bench, and also was outrebounded, 37-28, on a night Cody Zeller scored 20 points with seven rebounds.

What?s next for Indiana? In his fourth season, Tom Crean officially brought back Indiana to national relevance this season, taking the Hoosiers to a 27-9 record after going 12-20 last season. Indiana played in the NCAA tourney for the first time since 2008 and advanced to the Sweet 16 for the first time since 2002, beating New Mexico State and VCU before falling to Kentucky. Save for Verdell Jones III, every key member of this year?s team returns next season, with players like Cody Zeller, Victor Oladipo, Jordan Hulls, Remy Abell, Christian Watford, Will Sheehey and Matt Roth all back. Plus, the Hoosiers will welcome one of the top recruiting classes in the nation led by five-star recruits in guard Yogi Ferrell and forward Hanner Perea, and four-star forward Jeremy Hollowell.

FINAL: Michael Kidd-Gilchrist scored 24 points and grabbed 10 rebounds to lift Kentucky to a 102-90 win over Indiana on Friday at Georgia Dome in Atlanta in the Sweet 16. Doron Lamb also had a good game for Kentucky (35-2), as he added 21 points, thee rebounds and went 6-of-11 from the field. Hot shooting from both sides led to a full-fledged shootout. The Wildcats shot 48 percent (31-of-64) and Indiana (27-9) shot 52 percent (36-of-69). The Wildcats went 35-of-37 from the charity stripe as a team (95 percent). Cody Zeller contributed 20 points, grabbed seven rebounds, and knocked down 9-of-14 shot attempts, while Christian Watford led the way for Indiana with 27 points.  Other Indiana scorers in double figures included Victor Oladipo (15), Jordan Hulls (12) and Will Sheehey (10).

HALFTIME: Kentucky took full advantage of the stellar combination of Michael Kidd-Gilchrist and Terrence Jones, ending the first half against Indiana up 50-47. Kidd-Gilchrist scored 11 points and grabbed five rebounds, while Jones scored 12 points, grabbed four rebounds, and shot 5-of-8 from the field. Kentucky shot 49 percent in the first half and Indiana shot 56 percent. The Hoosiers have been able to keep the Wildcats' leading scorer, Anthony Davis, under control thus far, as the freshman has two points in six minutes. The Hoosiers' Christian Watford had a big first half, with 17 points and three rebounds.