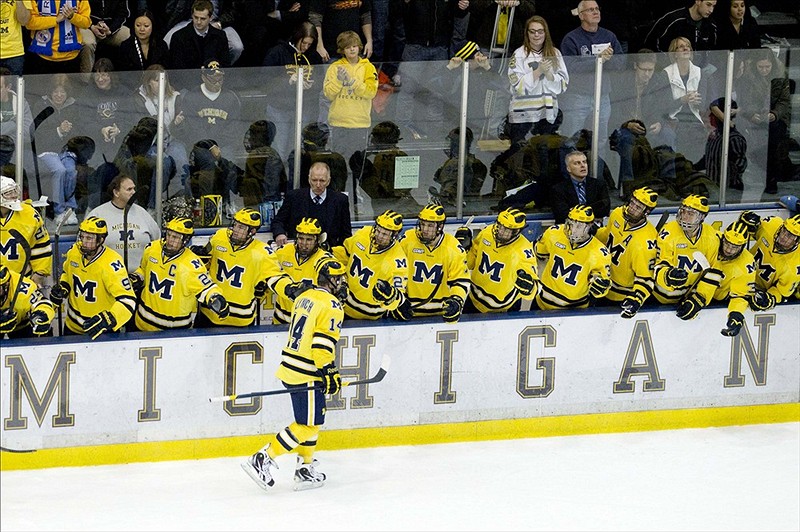 Minnesota, Michigan and Michigan State are three of the 16 men's hockey teams in the NCAA Tournament that leads to the Frozen Four. Michigan (9), Minnesota (5), and Michigan State (3) have combined for 17 NCAA championships. There's more info at NCAA.com's hockey section, including a great interactive bracket with game times and TV info.

Michigan (24-12-4 overall) earned the program's 22nd straight berth into the NCAA Tournament as the No. 1 seed and faces No. 4 seed Cornell (18-8-7 overall) in the opening round today. The game will be televised live on ESPNU and webcast on ESPN3.com.  The regional also features No. 2 seed Ferris State and No. 3 seed Denver. The winners of the first-round games will meet on Saturday for a chance to go the Frozen Four, which is set for April 5 and April 7 in Tampa, Fla.

Minnesota (26-13-1 overall) enters the NCAA tournament with a 26-13-1 record. The Gophers are seeded second in the NCAA?West Region and will face No. 3 seed Boston University on Saturday. North Dakota is the No. 1 seed and will face No. 4 seed Western Michigan on Saturday. The semifinal winners will play Sunday.

Get more info on the three Big Ten team's in the tournament at MGoBlue.com, Gophersports.com, and MSUSpartans.com