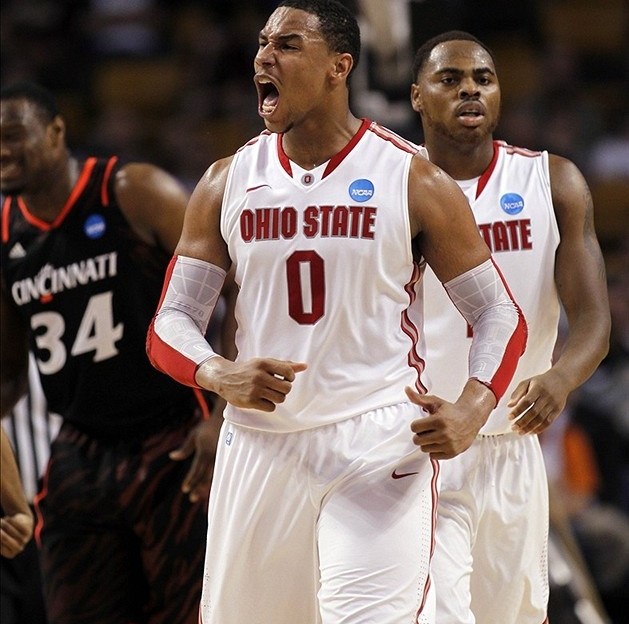 FAST RECAP: Jared Sullinger scored 23 points, grabbed 11 rebounds and handed out three assists as No. 7 Ohio State defeated Cincinnati 81-66 on Thursday at TD Garden in Boston in the Sweet Sixteen. Both Sullinger and Deshaun Thomas played well for Ohio State (30-7). Sullinger went 7-of-13 from the field. Thomas had 26 points, hauled in six rebounds, knocked down 10-of-16 shot attempts, and shot 3-of-5 from long range. The Buckeyes shot 50 percent from the field (27-of-54). Ohio State was on fire from beyond the arc during the game, shooting 47 percent (8-of-17).

The Buckeyes shot 19-of-27 from the free throw line. Lenzelle Smith Jr. shot 6-of-7 from the field and scored 15 points for Ohio State. The Buckeyes also got a solid contribution from Aaron Craft, who scored 11. Cashmere Wright contributed 18 points, pulled down four rebounds, contributed three assists, and drilled 4-of-6 three-pointers for Cincinnati (26-11) in the loss. Justin Jackson was 4-of-5 from the floor and chipped in eight points for the Bearcats. Cincinnati was hot from long range, hitting 9-of-23 threes for a 39 percent night from beyond the arc. The Bearcats also got double-digit games from Jaquon Parker, who scored 10 and Sean Kilpatrick, who scored 15. Ohio State won the rebounding battle en route to victory, pulling down 33 boards to 25 for Cincinnati. The Buckeyes led 27-22 with 3:00 left in the first half before they widened the margin to 13 points with an 8-0 run that ended late in the first. Shannon Scott finished the run off with a field goal, which helped Ohio State lead 37-25 at halftime.

FAST HALFTIME RECAP: Jared Sullinger scored 10 points for Ohio State in the first half to carry the Buckeyes to a 37-25 lead over Cincinnati. Sullinger and Deshaun Thomas are leading the way for Ohio State. Sullinger grabbed nine rebounds. Thomas scored 20 points, shot 8-of-12 from the field, and hit 3-of-5 three-point tries. Trailing 7-4, the Buckeyes used a 9-0 run to blow past the Bearcats and take a six-point lead. Ohio State had seven offensive rebounds in the first half, leading to second-chance opportunities. The Buckeyes moved the ball in the first half, accounting for nine assists on 14 field goals. Cincinnati's Justin Jackson already has eight points and five rebounds.