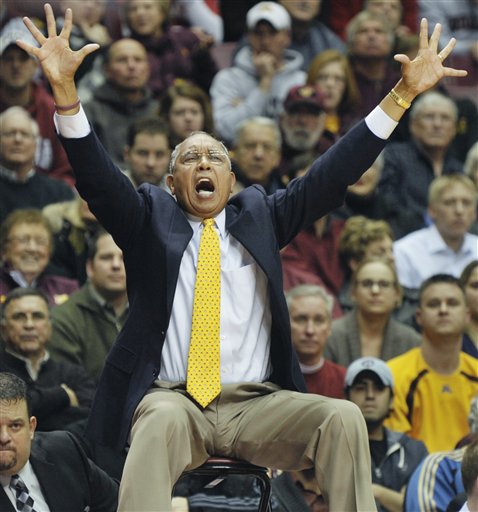 (AP) Rodney Williams and Andre Hollins each scored 24 points to help Minnesota advance to the semifinals of the NIT with a 78-72 win over Middle Tennessee on Wednesday night. Elliott Eliason added 12 points and seven rebounds, while Hollins also had six rebounds and four assists. Marcos Knight led Middle Tennessee (27-7) with 19 points and nine rebounds. Minnesota (22-14) will face Pac-12 regular-season champion Washington at Madison Square Garden on Tuesday (NIT bracket). It will mark the Gophers' first appearance in the NIT semis since 2003. Read the full AP recap, see the box score and get Tom Dienhart's analysis in this post.

TOM DIENHART'S TAKE
Key player: Andre Hollins. The freshman guard continues to finish the season with a flurry, notching 24 points. It was the seventh game in a row that Hollins has eclipsed the double-digit mark in scoring, helping the Gophers to their fifth win in their last six games after enduring a six-game losing skein. He had five double-figure scoring games before this hot streak. Hollins hit 8-of-11 shots, including 2-of-3 from 3-point range, and had six rebounds, four assists and two steals. Rodney Williams also continued his hot streak with 24 points while also grabbing three rebounds, two assists, two steals and two blocks.

Key number: 54.5, Minnesota?s 3-point percentage. Most of the numbers were even in this hotly contested game. The big difference was the Golden Gophers? marksmanship from long range. Minnesota drained 6-of-11 3-pointers for a team that got just one point from its bench. The Blue Raiders hit 4-of-13 from 3-point range (30.8).

What?s next: Minnesota advances to the NIT Final Four for the first time since 2003, winning three road games in succession (LaSalle, Miami, Middle Tennessee) to reach New York. The Gophers will play No. 1 seed Washington on Tuesday in the Big Apple. The Huskies knocked off No. 8 Texas-Arlington; No. 4 Northwestern; No. 3 Oregon to reach the Final Four. It?s been a strong run for a Washington team that won the Pac-12 regular-season title but failed to make the NCAA tourney. That made the Huskies the first team from a ?power conference? to earn the dubious distinction of winning its conference?s regular-season title and not making the Big Dance. The Lorenzo Romar vs. Tubby Smith matchup will be a terrific coaching battle.

Get our half-by-half recaps powered by Narrative Science:

Final: Rodney Williams scored a career-high 24 points and Andre Hollins added 24 points and seven boards as they teamed up to lead Minnesota to a 78-72 victory over Middle Tennessee on Wednesday at Murphy Athletic Center in the NIT. Williams picked up Minnesota (22-14) with three assists and 8-of-13 shooting from the field. Neither team could seize control of the game, as there were nine lead changes. Elliott Eliason had a quality shooting game, nailing 6-of-7 shots from the field and scoring 12 points. The Golden Gophers hit 47 percent of their field goals (27-of-58) and also got a double-digit performance from Austin Hollins (10). Marcos Knight contributed 19 points and nine rebounds for Middle Tennessee (27-7).

Halftime: Middle Tennessee will start the second half against Minnesota with the advantage after a first period with six lead exchanges ended at 32-28 in its favor. The Golden Gophers have limited the Blue Raiders' leading scorer, LaRon Dendy, to two points — well below his season average of 14.7. Rodney Williams has remained hot for the Gophers, scoring 11 points. Middle Tennessee distributed the ball well, with 10 assists on 14 field goals and nine different players scoring in the first half.