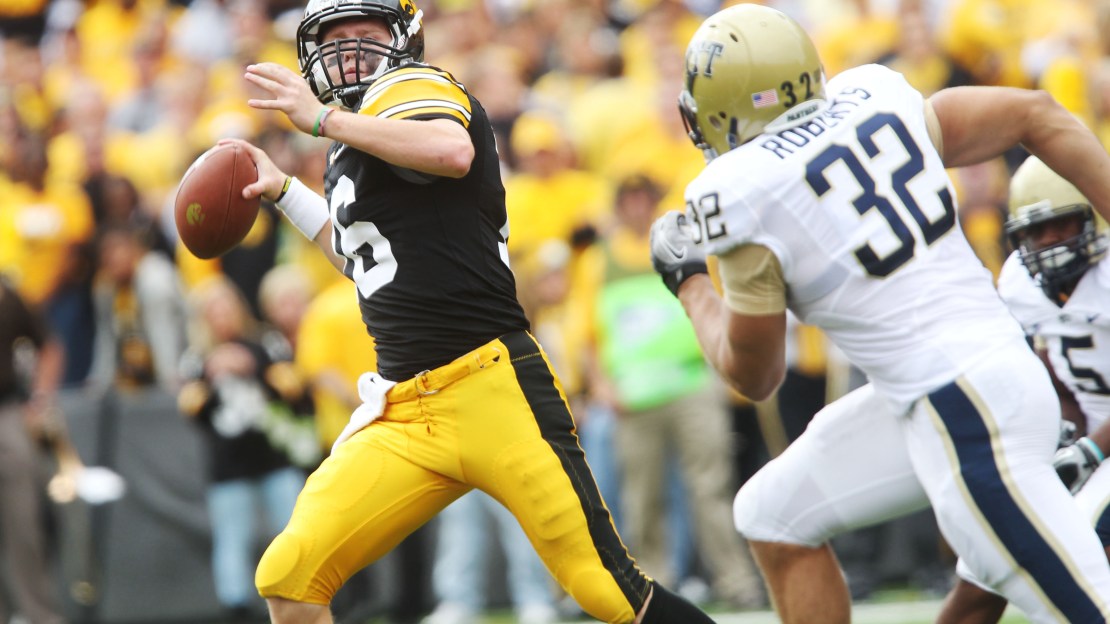 In Wednesday's web links, BTN.com senior writer Tom Dienhart sends you to some of the best Big Ten spring football stories and offers his perspective on each one. Among the topics: Kirk Ferentz and his offense in need of a fix, a pair of receivers who need to prove something and an update on Maryland transfer QB Danny O'Brien, among other things. See the links, plus Dienhart?s take, in this post.

Kirk Ferentz admits that the Iowa offense needs to be fixed. This is an offense that has gone in fits and starts in recent years under Ken O?Keefe, who was on Ferentz?s original staff in 1999. O?Keefe, who was taking heat, took a job coaching receivers with the Miami Dolphins.

?We needed to take things apart and look a little closer,? Ferentz said prior to opening his 14th spring practice in Iowa City. ?The bottom line is, we?re 4-4, which I think you?re well aware of. We?re 4-4 the last two years.?

Ferentz brought in former Texas offensive coordinator Greg Davis to run the Hawkeye offense. And Ferentz says things will be different when the Hawkeyes take the lid off the season September 1 at Chicago?s Soldier Field vs. Northern Illinois.

Personnel-wise, Iowa?s biggest question this spring is at running back. Jordan Canzeri is first in line to replace Marcus Cokerand Mika?il McCall, who both left the program. Ferentz must answer that question-among others–in what is a critical spring-maybe the most critical ever for Ferentz in Iowa City.

His coaching staff never has undergone this much tumult. In addition to Davis, Phil Parker was promoted to defensive coordinator; Ferentz?s son, Brian, was hired from the New England Patriots to coach the offensive line; Levar Woods was promoted from an administrative job to linebackers coach; Darrell Wilson moved from coaching linebackers to the secondary.

Ferentz is the longest-tenured Big Ten coach. But Iowa is just 25-23 in Big Ten play the last six seasons and has finished ranked just twice in that span. And the last Big Ten title? It came in 2004.

Many eyes will be on Iowa City this spring and fall.

OUT OF MARYLAND: Danny O?Brien will visit Wisconsin this weekend. That?s good news. The Maryland quarterback is looking to escape College Park, Md. And it would be a big boon to the Badgers if he chooses Wisconsin, which last year got a big boost from Russell Wilson after he transferred from N.C. State and led the Badgers to a second straight Rose Bowl.

O?Brien-who has visited Penn State and Ole Miss–is a lot like Wilson in that he can beat foes with his feet and arms, winning ACC Rookie of the Year honors in 2010. But O?Brien fell out of favor with the new staff at Maryland in 2011 and ultimately lost his job. Still, he would be a proven talent for a Wisconsin team with questions under center.

MAKE IT A GAME: Jerry Kill is planning a ?real? spring game. This is smart. Yes, many coaches may not like spring games, but they are good for fans and good to build interest for a program. And, after all, shouldn?t it be about the fans? Jerry Kill gets it. And that?s good. But I?m not surprised. He?s a great coach.

IN NEED OF A BOUNCEBACK: Michigan is moving Roy Roundtree from split end to flanker in hopes he regains his form. He caught 72 passes for 935 and seven touchdowns in 2010. But last season, Roundtree had just 19 catches for 355 yards and two touchdowns. He needs to regain his sophomore form and become the go-to wideout with Junior Hemingway gone for a Michigan team that needs more juice in the passing game if the offense wants to continue to evolve under astute coordinator Al Borges.

ROSS BACK AT ROSS-ADE: Speaking of receivers, Purdue will get a boost from the return of O.J. Ross, who missed the bowl game with academic issues. But he?s back SANS scholarship as he remains in the doghouse for missing classes. Ross was the team?s third-leading receiver last season. And this is a Boilermaker team that needs all the playmakers it can find for an offense that lacks big-play ability.

BIG-TIME MATCHUP: Over the winter, the Big Ten and Pac-12 announced plans to begin a scheduling arrangement across all sports. With that, Michigan State has announced a series with Oregon for later this decade. If each program remains at its current standard, this figures to be one of the nation?s best non-conference games when they meet in 2014 and 2015.

NEW GUYS IN NEBRASKA: With Carl Pelini off to coach Florida Atlantic, John Papuchis has taken over the Nebraska defense. His style and demeanor may differ from Pelini?s, but Papuchis is well-respected. He needs to find playmakers for a Cornhusker defense that ranked just seventh overall in the Big Ten last year (350.7 ypg); eighth vs. the run (158.5 ypg); seventh vs. the pass (192.2 ypg).

Papuchis? promotion is one of several alterations to the Cornhusker defensive staff. Defensive backs coach Corey Raymond left for LSU. Rich Kaczenski was tabbed from Iowa to take over the defensive line, while Terry Joseph arrives from Tennessee to coach the secondary. Also linebackers coach Ross Els has added the titles of recruiting and special teams coordinator. That?s a lot of shuffling that must pay off for a Nebraska squad that?s competing in the ultra-tough Legends Division with Michigan, Michigan State and Iowa and looks for its first BCS bowl since the 2001 season when it played for the national title and its first conference crown since 1999. Bo Pelini has a reputation for defense. And it must play better to keep pace with those schools in 2012.