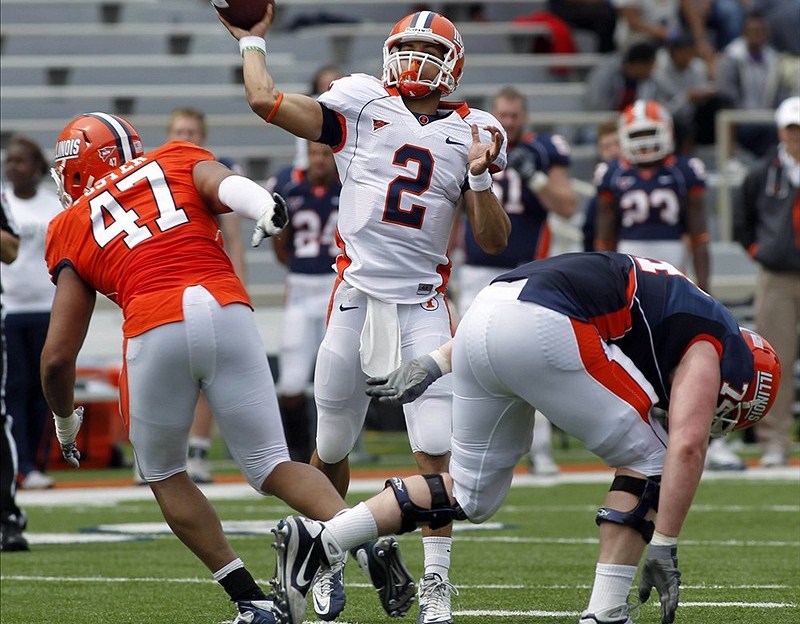 Illinois is the midst of spring practice under first-year head coach Tim Beckman, who was hired from Toledo to take over for Ron Zook. Beckman?s goal: Lead the Fighting Illini to the Big Ten championship, which they haven?t won since 2001 under Ron Turner. Zook couldn?t do it, going 34-51 overall and 18-38 in the Big Ten with three bowl bids in seven seasons. He was dismissed after a bizarre 2011 that saw the Illini open 6-0, then lose six in a row before winning their bowl game.

Enter Beckman, 47, who went 21-16 with two bowls in three years at Toledo. I pulled together a virtual roundtable of three prominent writers who cover Illinois to get their thoughts on the program as it works through spring drills and into 2012. Here are their thoughts, and I'll do more of these as spring ball continues and I file my Football Fix posts.

Mark Tupper, Decatur Herald-Review
?They have a new offensive coordinator (Billy Gonzales) who never has called plays before, so I think it is as much about the coaches as it is the players. It?s not only time for the players to learn a new system, but it?s also time for the new staff to step into bigger responsibilities and new roles and do something they probably have dreamed about for a long time.

?I think they are fortunate in that (quarterback) Nathan Scheelhaase is such a great kid and leader. He will be so willing and devoted to them to make this work. (Reilly) O?Toole is the better passer and he is similar and benefits from Scheelhaase?s leadership, so they have two guys at quarterback.

?The other thing is they have to figure out where they are at running back. Donovonn Young was hurt a little bit. At receiver, they are a little thin with A.J. Jenkins leaving.

?On defense, the players were so wed to (coordinator) Vic Koenning. They probably need to unlearn a bit and learn a new system. They loved him. He not only was the most popular coach on staff but took over (as interim head coach) after Zook left. They really followed him and were disappointed when he wasn?t there. They have to respond to different leadership. I think it?s a melding of coaches and players this spring.

?The one area I think they will be light years ahead will be special teams. They had nowhere to go but up because they were really terrible. Tim Salem will run that. He?s an experienced guy, maybe the most experienced guy on that staff. I sat with him 45 minutes to talk special teams and he was really impressive. He had more of a plan in 45 minutes for special teams than I heard in seven years under the previous regime. Fans are so used to seeing a punt return for one yard and mistakes made in coverage or on returns. When they see a positive play, they will go crazy because it has been so long since they have seen one.

?I don?t like (the fact Beckman is limiting access to practices). We are convinced we won?t know anything until the first game. We are getting almost no looks, just stretching before practices. Beckman has said he won?t show much in the spring game. The new staff will have the element of surprise in their hip pocket. I don?t think they are so worried about the first game (Western Michigan) but like the idea of Arizona State (in the second game) having just a week to digest what they saw.

?Zook limited things a bit, too. Football coaches are more paranoid than basketball coaches. They should know we aren?t smart enough to rat them out on much other than a trick play.?

Herb Gould, Chicago Sun-Times
?They need to find a running back, that is for sure. Jason Ford wasn?t great, which was a problem. (He?s gone.) There was a big fall off from Mikel Leshoure to Ford. (Donovonn) Young and (Josh) Ferguson are good candidates. Luke Butkus is offensive line coach and the line contributed to the fall off. Part of it was injuries. They need to run the ball, they need to block better And they need to adjust to the new scheme.

?Why would you close off a lot of access at Illinois? That was my initial thought. But (Beckman) just wants as much secrecy as he can have.

?On defense, they will take a hit with (end Whitney) Mercilus coming out (early). They need someone new to step up. They have candidates. The guy we were talking about last year was Akeem Spence. He was the focus this time last year. (End Michael) Buchanan is a stud who can step up. There are a lot of good pieces on the defense if they put it together. Terry Hawthorne the corner could be a stud. (Linebacker) Jonathan Brown is a really nice player.

?Darius Millines could be the receiver. He was banged up last year. When he went down, it really hurt them. He got hurt and they started to have troubles.

?The thing that can?t be underestimated is losing those coordinators. I know (offensive coordinator Paul) Petrino took a lot of heat in the second half of the season. But I don?t know if it was about him as much as personnel and Zook meddling. And (defensive coordinator Vic) Koenning was a monster coordinator not only in scheme but as a motivator. The new guys have big shoes to fill.?

Bob Asmussen, Champaign News-Gazette
?Installation is biggest key. They have closed spring practices for the most part. Media gets in for three practices and parts of all of the rest. (Tim Beckman) is keeping things under wraps best he can. We have seen just a bit.

?Based on what we think the offense will be–and we aren?t sure–we think it will be some type of spread. He has to make sure he has his quarterback. I would think he has his quarterback in (Nathan) Scheelhaase, who I have seen win two bowls. I think he?s pretty darn good. But they have to determine is he?s the guy. They love him from a leadership standpoint and running standpoint, but I don?t know if he can pass efficiently in this offense. The coaches won?t say what the offense is like, but Nathan told me it?s similar to the one (former offensive coordinator Mike) Locksley ran. Nathan was recruited for that offense but never played in it. He will have to be able to pass and think on his feet. He is pretty good at that. In the bowl, (interim head coach) Vic (Koenning) said ?go win the game.? And that?s the kind of kid he is. I think he will be the starter, but the coaches have to know that.

?On defense, they can?t replace (end) Whitney (Mercilus). The middle of the defense is an area to watch. The two safety spots, but they feel OK about their guys. (Linebacker Jonathan) Brown is good. But they don?t really know about anyone else there.?