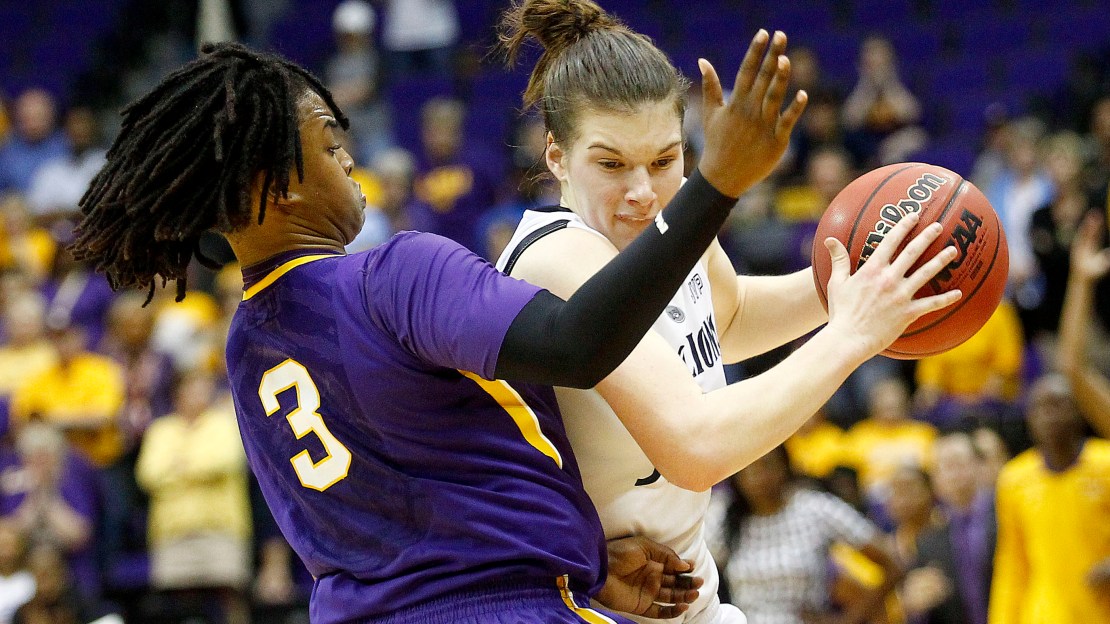 (AP) Maggie Lucas scored 30 points, three short of a career high, and fourth-seeded Penn State moved on to the third round of the women's NCAA tournament with a 90-80 victory over No. 5 seed LSU on Tuesday night.

Lucas was 7 of 12 shooting, including 5 of 7 from 3-point range. She also hit all 11 of her free throws, including eight in the final 1:10 of the game to ensure there would be no crowd-pleasing comeback for LSU, which had hoped to get a boost from playing a "neutral-site" game on its home floor.

"She's got really good composure and she's got a very strong, competitive will," Penn State coach Coquese Washington said of Lucas. "When she gets in a groove, the thing that she does is she opens things up for other players and she doesn't worry about when her next shot is coming. She becomes very unselfish and can become a play maker for other people.

"So she's a tremendous player to coach and I think she's a lot of fun to play with because she's has such an unselfish mindset about the game."

Indeed, after Lucas scored 19 in the first half on 6 of 8 shooting, her teammates became more involved in the second half, and the Lady Lions finished with five players in double figures.

Ariel Edwards scored 15 points and Mia Nickson had 14 points and 10 rebounds for the Lady Lions (26-6), who will play Connecticut in Kingston, R.I., on Sunday in the regional semifinals. That game will be the first third-round appearance for Washington, now in her fifth-year at Penn State.

"Our team has so many weapons and when one person has big couple minutes (in the) first half, it's bound that were going to have to start going to everyone else," Lucas said. "Our post players, Mia and Nikki (Greene), were just dominating inside, finishing great every time. I thought Ariel Edwards just came in and was just so huge for us. Our team is so balanced and everyone can impact the game in a huge way, and we showed that tonight."

LaSondra Barrett had 18 points and 12 rebounds for LSU (23-11), while Krystal Forthan added 15 points and Bianca Lutley 14 points and 10 rebounds. Barrett, a senior, made nine made free throws in what was her final game for the Lady Tigers, making her LSU's all-time leader with 497, surpassing Sylvia Fowles' 494.

"You have to give credit to Penn State. They have some amazing guards who are great shooters," Barrett said. "It is hard to find three guards who are all three shooters while you sprint back on defense, too."

The game was close most of the way and included 10 ties, but the fast pace was more to Penn State's liking, while LSU had hoped to slow the pace with tough physical defense and rebounding.

"The game was on pace at halftime to be in the 70s, 80s and we're usually pretty good when we can score that high," Washington said. "We kind of dictated the pace, and it was pace that we wanted to play."

LSU took its largest lead, 50-44, early in the second half, when Barrett scored four points during a 9-2 run that concluded with Theresa Plaisance's 3.

Penn State, which was 10-3 on the road this season, seized momentum right back with a six straight points, tying it at 50 on Nickson's free throws. The teams then stayed within a basket of each other until Edwards' floater and Nikki Greene's short jump hook put Penn State ahead 67-61 with 5:25 to go.

"We did not bring the same type of defensive intensity that we are known to have," LSU coach Nikki Caldwell said. "That has a lot to do with Penn State's ability to spread you because they have three guards that can shoot the 3 ball, have a post game, a mid-range game."

LSU briefly got as close as 67-65 on Jones' inside basket, but Nickson scored inside, then Edwards and Bentley each made free throws to push Penn State's lead to eight. LSU was able to get as close as three points twice after that, the last time on Barrett's three-point play that made it 76-73, but Zhaque Gray hit a layup soon after and Penn State started hitting free throws to close it out.

The virtual LSU home-game opened with a boisterous crowd overwhelmingly dressed in purple and gold on its feet in anticipation of the Lady Tigers' first basket. They remained standing for nearly three minutes while LSU had missed three shots and turned the ball over on its first four possessions.

Penn State raced to a 9-0 lead, beginning with Lucas' 3 from the corner. Nickson followed with a pair of free throws and a tough inside bank-shot over Courtney Jones, then Lucas hit a floater in the lane, after which Caldwell called timeout.

Penn State led 14-7 after Lucas' second 3, but Forthan responded with a 3 of her own that ignited an 11-2 run. The spurt was capped by Lutley's spin move and layup, giving LSU its first lead at 15-14.

Neither team managed to build much of a gap for the rest of the half, and the Lady Tigers edged in front on Webb's free throw, 37-36, going into halftime.