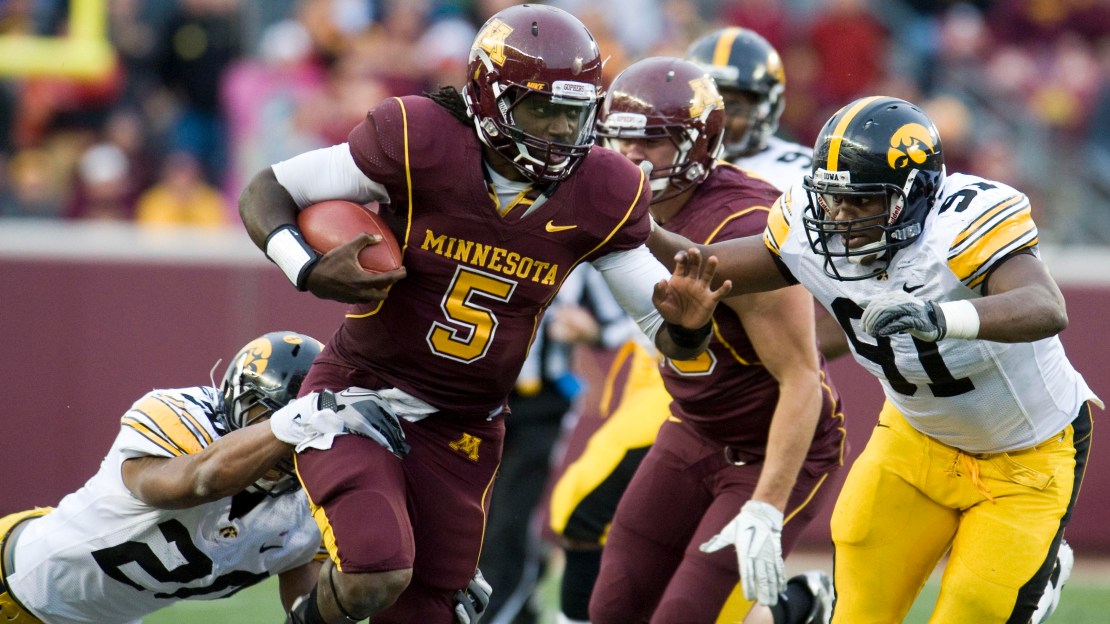 Minnesota kicks off spring practice Thursday. As part of our daily spring "Football Fix" feature, I caught up with MarQueis Gray, the Golden Gophers quarterback who is trying to build on a breakout 2011 season and lead Minnesota to a bowl. Gray started 10 games last season after splitting time between quarterback and receiver earlier in his career. The focus on quarterback benefited Gray, who hit 108-of-203 passes (50.7 percent) for 1,495 yards with eight touchdowns and eight interceptions. Read the Q&A in this post.

Q: What do you want to focus on in the spring?
A: The coaching staff is gonna keep stats and they want me to hit over 60 percent of my passes and have more touchdown passes than interceptions. It will be a challenge, but I think I am up for it. I hit only about half my passes last year.

Q: The Minnesota coaching staff went to Baylor over the winter to study how the Bear coaches used Heisman winning quarterback Robert Griffin. Do you know what the plan is?
A: They told me they have a few things up their sleeves and will install them the first couple days of spring ball. We will see them when we begin spring practices soon. But I haven?t heard anything yet. I am excited and interested to see.

Q: Is Griffin a player who you want to be like?
A: Of course, everyone wants to win the Heisman. Robert is a great player.

Q: What do you attribute to your improvement last year?
A: Gaining more confidence week in and week out, believing in myself that I can make those plays and throws and my arm. I just need to build off of that.

Q: So, improving your passing is a major goal this spring?
A: That is my main focus. Passing is what I have to have to get to the next level. That?s what I?m working on.

Q: How good can the Minnesota offense be in 2012?
A: We have the talent. This is my first year being here that we will have the same coaching staff entering spring ball and we won?t have to learn a new play book. I see us doing a lot of great things this fall.

Q: How is Coach Kill?s staff different than Tim Brewster?s?
A: Coach Kill is a hands-on guy. He will be in each position?s meeting room, so we know he will hold everyone accountable on and off the field. He is very involved with the assistant coaches.

Q: Is it important to be a leader this year?
A: I was more of a leader by example in the past. But last year, I became more of a vocal leader. I got more confident, especially after the Iowa game. I need to help lead this team as a senior. And I think I can do it.