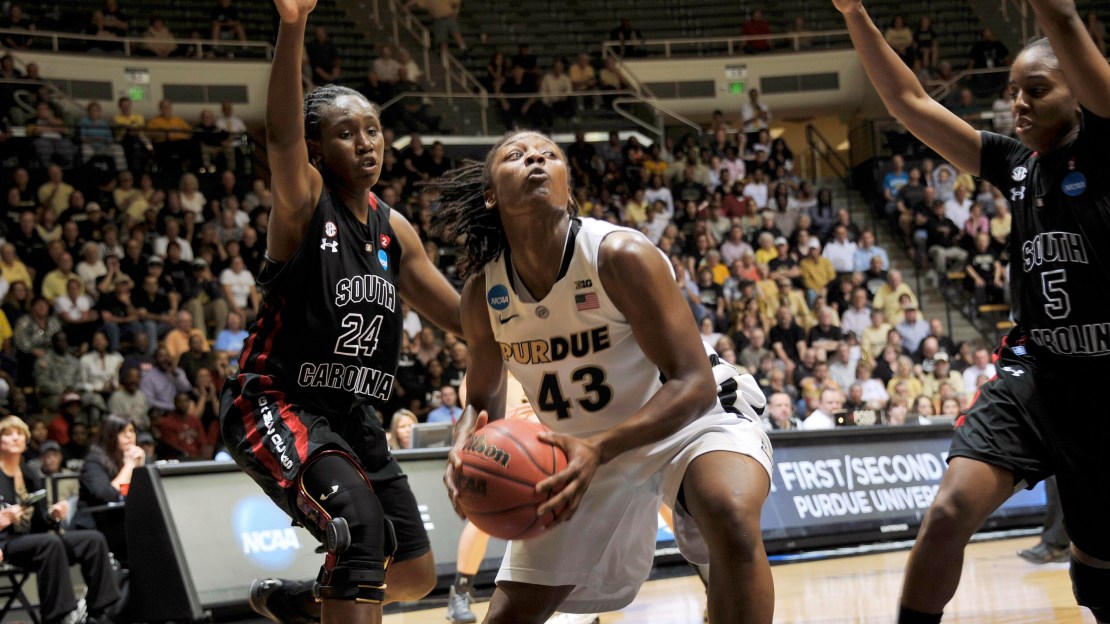 (AP) South Carolina rebuilt its program with a defensive philosophy, and it sure paid off on Monday night. Markeshia Grant scored 21 points and the fifth-seeded Gamecocks forced 20 turnovers in a 72-61 victory over No. 4 seed Purdue in the second round of the NCAA women's tournament.

Ieasia Walker added 17 points, six rebounds and four assists for South Carolina, which will make its first regional semifinal appearance in a decade when it meets top-seeded Stanford on Saturday in Fresno, Calif. The Cardinal advanced with a 72-55 victory over eighth-seeded West Virginia.

South Carolina (25-9) wasted no time celebrating its latest and perhaps biggest achievement this season. After shaking hands with the Boilermakers, the Gamecocks hugged by the "P" at center court, then bounced up and down before walking down to salute the pep band that made the trip to West Lafayette.

It was a milestone victory for South Carolina and coach Dawn Staley, who returns to the round of 16 for the first time since 1992, her senior season at Virginia. The Gamecocks also matched the 2001-02 squad for the school's most wins in the SEC era.

And they did it in the style Staley promoted – with stout, in-your-face defense.

KK Houser scored 15 points for Purdue (25-9), and Brittany Rayburn had 13 to finish with 1,795 points – good enough for sixth on the school's career scoring list.

But on a night when the Boilermakers shot just 39.3 percent from the floor and made only four 3-pointers, it just wasn't enough.

Rayburn never really got into a rhythm, and Courtney Moses, who broke the women's tourney record by making nine 3s in Saturday's first-round victory, was 0 for 2 beyond the arc Monday and finished with only seven points.

The difference was obvious.

South Carolina took control of the game with an early 11-2 run, wiping out an 11-8 Purdue lead.

The Boilermakers spent the rest of the game trying to rally. They closed to 27-26 when Houser hit a 3-pointer with 3:13 left in the first half, but the Gamecocks scored the final six points to make it 33-26 at the break.

Grant hit back-to-back 3s to give South Carolina a 39-29 lead early in the second half.

Tempers flared, too. Purdue's Chantel Poston and South Carolina's La'Keisha Sutton each received a technical foul early in the second half. Less than a minute later, following a replay review, Purdue's Alex Guyton was called for a Flagrant 1 foul while battling for a loose ball. Ebony Wilson went 1 for 2 from the line and Walker followed with a 3 to make it 47-33 with 13:28 to play.

The Boilermakers charged back with an 11-2 run to close to 53-46 with 9:26 remaining. But the Gamecocks scored the next four points, and Purdue never seriously challenged again.