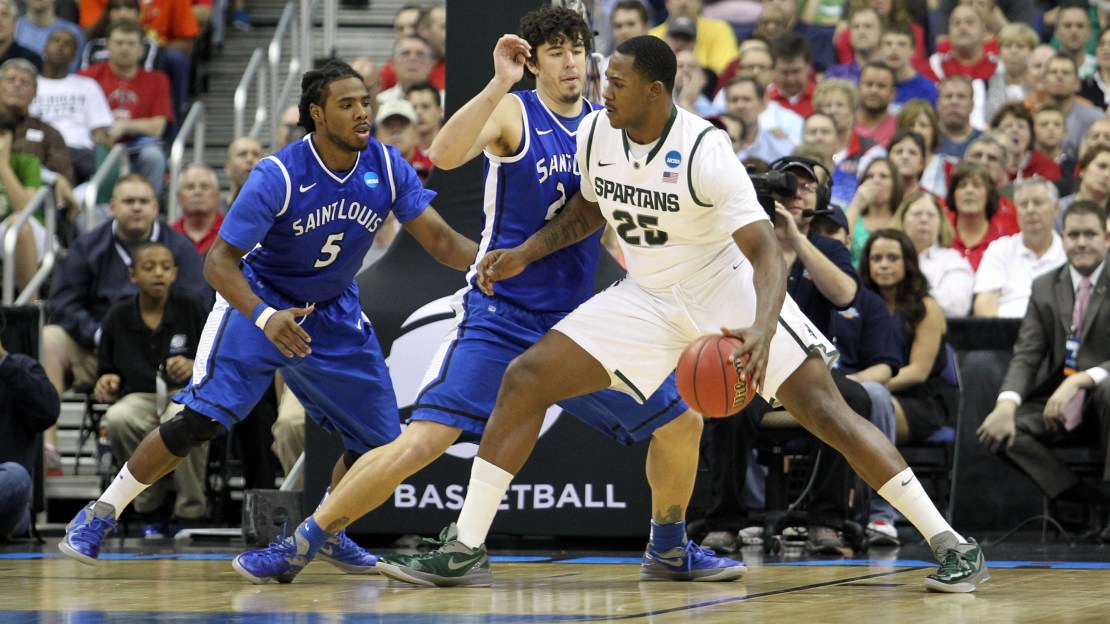 Michigan State held off Saint Louis on Sunday to advance to its fourth Sweet 16 in the last five seasons (recap). As usual, Draymond Green had an impressive all-around game (tweets). With the victory, Michigan State joins Indiana, Ohio State and Wisconsin in the Sweet 16. It looked like Purdue may join the group, too, but it fell to Kansas in the final seconds of a game it led throughout Sunday night (recap).

Key player: Draymond Green is in a zone. He notched a triple-double in the opening victory over LIU on Friday. In today?s win over Saint Louis, Green went for 16 points with 13 rebounds. He also had six assists and two steals. The senior and Big Ten Player of the Year was one of four Spartans who scored over double-figures vs. the pesky Billikens, with Keith Appling notching 19, Brandon Wood 10 and Derrick Nix 10 for Tom Izzo, who is looking for his seventh Final Four berth and first since going to back-to-back Final Fours in 2009-2010.

What?s next: No. 1 Michigan State is off to the Sweet 16 in Phoenix for the fourth time in five years after losing in the first round of the Big Dance last season. The Spartans will play No. 4 Louisville. MSU beat the Cardinals in the regional final in 2009 to reach the Final Four. Win that, and a meeting with No. 3 Marquette or No. 7 Florida in the regional final looms with a spot in the Final Four on the line.

Key player: Robbie Hummel. He poured out his heart and soul in the loss to Kansas, scoring 26 points, nine rebounds and three assists. The problem: Only four of those points came after halftime, when Purdue held a 36-30 lead but was outscored 33-24 in the second half. And he missed a big shot late in the final seconds with the game slipping away. Still, Hummel?s final game as a Boilermaker was an epic effort and he?ll leave campus as an all-time great.

Key number: 10, Purdue turnovers, compared to seven for Kansas. It?s rare for the Boilermakers to lose the turnover battle. And it hurt in this game. KU also won the rebounding battle, 35-32, which helped the Jayhawks overcome 33.9 percent shooting as Purdue came up empty in its last three possessions of the game to lose this heartbreaker.

What?s next: The Boilermakers close the season 22-13. Next year could be a rebuilding effort with Robbie Hummel, Lewis Jackson and Ryne Smith gone. But Terone Johnson, D.J. Byrd and Anthony Johnson will provide a foundation for 2012-13. And Matt Painter will welcome a strong four-man recruiting class led by point guard Ronnie Johnson (brother of Terone) and 6-9 Jay Simpson.