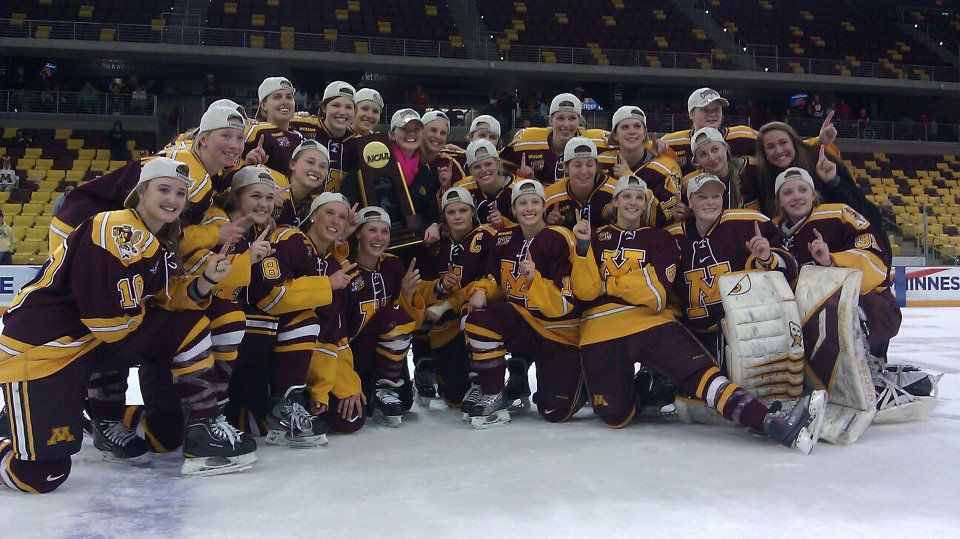 After falling behind 2-0 midway through the first period, Wisconsin (33-5-2) rallied behind goals from Stefanie McKeough and Brooke Ammerman. The Badgers had an opportunity to grab the lead at the end of the first, but failed to score on a 5-on-3 power play.

The Gophers (34-5-2) regained the momentum at the end of the first when West scored on a penalty shot after being hauled down on a breakaway. It was the first penalty-shot goal in the 12-year history of the women's title game.

West beat Alex Rigsby, then celebrated by leaping into her teammates' arms on the Gophers' bench.

Erickson's second goal came with 16:03 to play in the third and gave Minnesota 4-2 lead.

Wisconsin was looking for its fifth title in seven seasons, but couldn't crack Raty after the first.

The closest the Badgers came to scoring again came at the end of the second period when Carolyn Prevost had several attempts to shove the puck over the line from in close. But Raty made two glove saves and a blocker save to preserve the lead.

Raty, a junior from Finland, turned away 20 shots in the final period. She also held strong after the Badgers pulled their goalie for a 6-on-4 advantage in the game's final minutes.

Wisconsin was the top-ranked team in the country for all but one week this season. The Gophers held the top slot briefly in early January, and ended up No. 1 in the end.

The Gophers held Wisconsin's Brianna Decker, the Patty Kazmaier Award winner and the nation's leading scorer, without a point.