High Five: Big Ten teams prep for next round 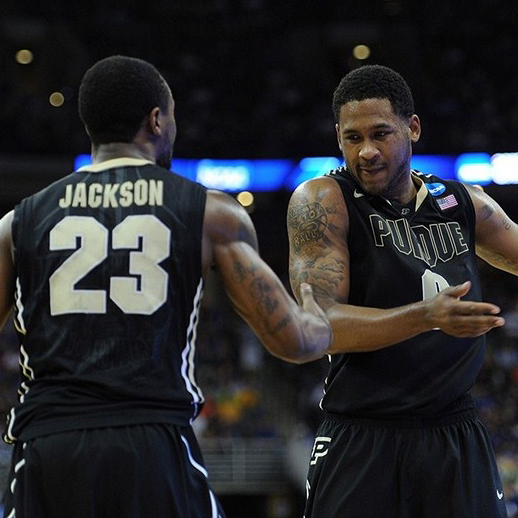 It was bound to happen. Friday was a day of upsets in the NCAA tournament and the Big Ten did not go unscathed as Michigan fell. But Purdue rose up and won and Michigan State rolled as well leaving five Big Ten teams alive and kicking in the tourney. Read this post for my capsules on Friday's action plus my take on Northwestern's NIT loss, too. On now: Ohio State vs. Gonzaga. Later: Wisconsin vs. Vanderbilt, and Indiana vs. VCU.

No. 13 Ohio 65, No. 4 Michigan 60
Key player: Evan Smotrycz went for 15 points with seven boards, but Trey Burke led the charge by scoring a team-high 16 points (12 in the second half) and dishing five assists. But the freshman point guard sensation couldn?t connect in crunch time and hit just 5-of-15 shots, which epitomized the plight of the Wolverines who hit only 40.7 percent (22-of-54) of their shots. Big Blue lived by the 3-pointer all season and hit just 30.4 percent (7-of-23). Michigan outscored Ohio, 31-30, in the second half. But that wasn?t enough to overcome the 35-29 halftime edge Ohio built.

What?s next? This was a game that many pundits felt Michigan could lose, and it did in becoming the first of six Big Ten NCAA teams to fall out of the Big Dance. The Wolverines, who lost their last two games of the season, still haven?t advanced beyond the first weekend of the tourney since 1994. Michigan finishes its season 24-10, losing in the first round as a No. 4 seed. Now, it?s time to focus on next season-and the future is bright. Yes, Zack Novak and Stu Douglass will be missed, but talents like Trey Burke, Evan Smotrycz, Tim Hardaway, Jr., Jon Horford and Jordan Morgan, among others, are back. And touted freshmen 6-5 Glenn Robinson III-a four-star recruit–and 6-10 Mitch McGary–a five-star recruit–will arrive.

No. 10 Purdue 72, No. 7 St. Mary?s 69
Key player: Since Kelsey Barlow was booted from the team for breaking rules in February, Terone Johnson has picked up his production. In this game, Johnson hit 9-of-13 shots for a team-high 21 points. The sophomore also had four rebounds and five assists while playing 37 minutes. His production was big when you consider Ryne Smith didn?t score and D.J. Byrd had just eight points, as Purdue saw St. Mary?s go on a late 14-2 run that helped the Gaels overcome a 13-point hole and surge to its first and only lead (69-68) in the last minute before Purdue assumed command on free throws by Lewis Jackson and Robbie Hummel.

Key number: 16, the percent of 3-pointers St. Mary?s hit. In the first half, the Gaels connected on just 1-of-15 3-pointers. The Gaels crushed the Boilermakers on the glass, 36-25. But the poor long-range shooting-including an air ball 3-point attempt by Jorden Page with 10 seconds left that could have given St. Mary?s the lead again-was most costly to St. Mary?s, which wasted a 23-point, 14-rebound effort by Rob Jones.

What?s next? Purdue will take on No. 2 Kansas, a formidable task. The Boilermakers must regain their 3-point stroke after hitting just 31.3 percent (5-of-16) vs. St. Mary?s if they want to have any chance to upset the Jayhawks. Another key: Robbie Hummel. He led Purdue with seven boards but had just 10 points. How will the senior?s cranky knees respond to playing two games in three days? He looked spent after playing two games in two nights in the Big Ten tourney. Hummel will need a huge game on Sunday.

No. 1 Michigan State 89, No. 16 LIU 67.
Key player: Draymond Green. He showed why he?s the Big Ten?s best player and one of the nation?s best by notching a triple-double. Green hit 10-of-17 shots en route to scoring 24 points. The senior also tallied 11 rebounds and 10 assists. And three other Spartans had double-figures, with Derrick adding 18 points; Adreian Payne 16; Keith Appling 10.

What?s next: The Spartans will take on a No. 9 Saint Louis club which dumped No. 8 Memphis, 61-54. The Billikens and coach Rick Majerus do it with defense, as they limited Memphis to 38.9 percent shooting. And the Tigers hit just 13.3 percent from 3-point range (2-of-15). The Billikens lack size, but they have a playmaker in guard Kwamain Mitchell, who burned Memphis for 22 points. If Michigan State wins, it may set up a Sweet 16 meeting with Rick Pitino and Louisville or Steve Alford and New Mexico. The West Region saw No. 2 Missouri get dumped by No. 15 Norfolk State today, so the path of higher-seeded teams in this region just got easier. Michigan State knows that. Look out.

NIT: No. 1 Washington 76, No. 4 Northwestern 55
Key player: John Shurna finished his Northwestern career with a bang, hitting 6-of-12 shots (5-of-7 on 3-pointers) for 24 points. He also had six rebounds, two assists, four steals and a block. But it wasn?t enough for a Wildcat club that shot just 35.3 percent (18-of-51) on the road in a hostile and loud environment.

Key number: 32, points for Washington?s Terrence Ross. Northwestern had no answer for the Husky guard, who hit 6-of-14 from 3-point range and also had a team-high eight rebounds. This is a motivated U-Dub team that felt slighted for being left out of the Big Dance. In fact, Washington was the first ?power conference? team to win a regular-season title-and not make the NCAA tourney.

What?s next? The season is over for Northwestern (19-14), and John Shurna?s career is finished. The campaign didn?t end like the Wildcats had expected, as their run to their first NCAA bid fell short. Now, Northwestern couldn?t get by the second round of the NIT after an opening victory in Evanston over Akron. Yes, the Wildcats will miss Shurna, the school?s all-time leading scorer. But NU will welcome back lots of good talent-including Dave Sobolewski, JerShon Cobb, Drew Crawford and Reggie Hearn–to make another run at that elusive Big Dance bid in 2012-13.