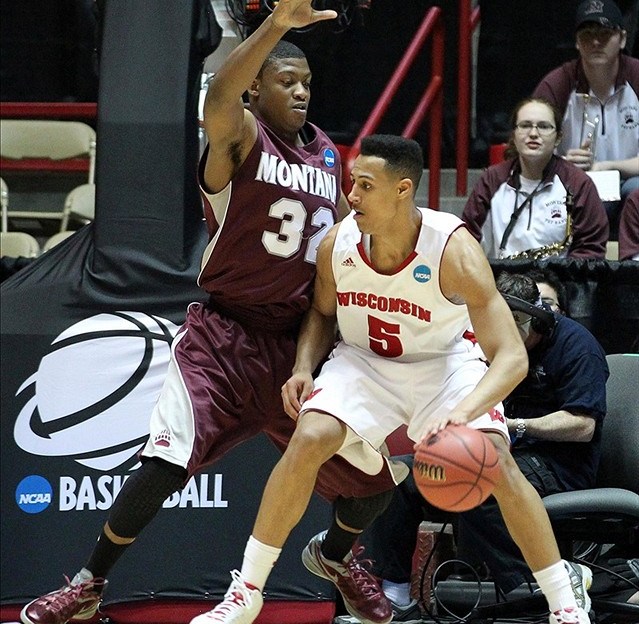 Jordan Taylor scored 17, grabbed eight rebounds and handed out six assists to help Wisconsin past Montana 73-49 on Thursday at University Arena in Albuquerque in the second round of the NCAA Tournament. Ryan Evans had his way inside, hitting 6-of-8 shots en route to notching 18 points vs. an undersized Montana squad. Get Tom Dienhart's take and more in this post.

Tom Dienhart's key player: Ryan Evans had his way inside, hitting 6-of-8 shots en route to notching 18 points vs. an undersized Montana squad. But let?s go with point man Jordan Taylor. He tallied 17 points, hitting 6-of-10 shots and 3-of-5 from 3-point range. Taylor also had eight rebounds and six assists. Want more? Taylor committed zero turnovers. It was a vintage effort by the senior.

Tom Dienhart's key number: 38.3 percent. That?s what Montana shot from the field. Credit the Wisconsin defense, which is the best in the nation. The Badgers built a 10-point halftime bulge and never looked back.

What?s next? Remember all of that talk about a Montana upset of Wisconsin? Chatter about the Grizzlies? 14-game winning streak? Hub-bub over Montana?s offensive prowess? Yes, laughable. All the Badgers did was notch their biggest margin of victory (24) ever in an NCAA tourney game, hitting 52.6 percent of their 3-pointers (10-19) and out rebounding Montana (32-19). Wisconsin will take on Harvard or Vanderbilt next. A matchup with the Commodores would feature a lot players coming off screens and gunning 3-pointers. A tilt with the Crimson could be an ugly affair, as Harvard favors defense, like Wisconsin. It also plays at a slow pace, like Wisconsin. Prepare to wince ? a lot.

FINAL RECAP: Jordan Taylor scored 17, grabbed eight rebounds and handed out six assists to help No. 13 Wisconsin past Montana 73-49 on Thursday at University Arena in Albuquerque in the second round of the NCAA Tournament.

Taylor and Ryan Evans had good games for Wisconsin (25-9). Taylor knocked down 6-of-10 shot attempts and made 3-of-5 three-pointers. Evans contributed 18 points, corralled nine rebounds, and made 6-of-8 shots from the floor.

Scoring that few points is rare for Montana (25-7), a team that came in averaging 69.1 points per game this season. The Badgers held the Grizzlies to 38 percent shooting from the field and grabbed 24 defensive rebounds, while only allowing four offensive rebounds.

Wisconsin was able to carry momentum into the break and sustain it to start the second half. The Badgers led 30-26 in the first before they widened the margin to 16 points with a 16-4 run that ended early in the second half.

Wisconsin hit 49 percent of its field goals (23-of-47). The Badgers were hot from long range, hitting 10-of-20 threes for a 50 percent night from beyond the arc. Wisconsin also got double-digit games from Rob Wilson, who scored 10 and Josh Gasser, who scored 12.

Art Steward scored 18 points, pulled down three rebounds, and went 6-of-10 from the field for Montana in a losing effort.

Winning the rebounding battle was a key to victory for the Badgers as they outrebounded the Grizzlies 32-18. Wisconsin had the free throw shooting advantage, converting on 89 percent (17-of-19) attempts, to just 67 percent (10-of-15) for Montana. With the victory, the Badgers snapped the Grizzlies' 14-game winning streak.

HALFTIME RECAP: Ryan Evans scored 14 points for Wisconsin in the first half to carry the Badgers to a 39-29 lead over Montana. Evans and Jordan Taylor are leading the way for Wisconsin. Evans grabbed six rebounds and shot 6-of-8 from the field. Taylor scored 10 points, grabbed three rebounds, and had four assists.

The Badgers moved the ball in the first half, accounting for nine assists on 14 field goals. Through 20 minutes of action, a major weapon for the Grizzlies has been shut down, as Wisconsin has kept Will Cherry in check. The junior enters halftime with two points, well below his season average of 16.

Art Steward is putting together a nice game so far for Montana. The senior has 12 points.