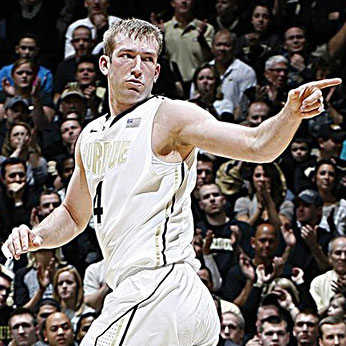 Here's my sixth and final tourney preview for Big Ten men's teams in the upcoming NCAA Men's tournament – the others are all right here. Purdue is the No. 10 seed in the Midwest and faces No. 7 seed St. Mary's on Friday. Earlier, Brent Yarina compiled a helpful post on Purdue's upcoming opponent. Use the NCAA.com bracket and the BTN scoreboard to track all of the action this tournament.

How far can it go? The second round. The Boilermakers will have a difficult time getting by St. Mary?s in their first game of the Midwest Region. The No. 7 Gaels are a veteran team that is tourney tough, so a win would be one of the biggest of the season for a Purdue club that lacks an impressive resume. St. Mary?s is led by a premier point guard in Matthew Dellavedova, the West Coast Conference Player of the Year. Purdue must play tight defense on the perimeter vs. a good-shooting team if it wants a chance to advance. It also will need to continue its hot shooting from three-point range vs. a St. Mary?s squad that paced the WCC in scoring defense. And the Gaels also are a better rebounding team than Purdue, which lacks size and athletic ability.

Best second-round matchup: Purdue must topple St. Mary?s and then pray for a miraculous upset of No. 2 Kansas by No. 15 Detroit. The Jayhawks easily could have been a No. 1 seed, led by one of the nation?s top players in Thomas Robinson. Yes, this may not be one of Bill Self?s most talented squads, but it still is a formidable bunch that won the Big 12 regular-season crown over the likes of Missouri and Baylor.

Chance to advance to Sweet 16: Minimal. Even if the Boilers upset St. Mary?s, they figure to get stream rolled by mighty Kansas in the next round-assuming the Jayhawks open with a win over Detroit. Purdue will be fortunate to extend its current run of 13 consecutive opening-round NCAA tourney victories. The last time Purdue was one-and-done? It was 1993, when the Glenn Robinson-led Boilers got dumped by Rhode Island.

Who needs to shine: Robbie Hummel. This is it, the senior?s last run in a Boilermaker uniform. And he wants to make the ride last as long as he can after battling through two knee injuries. Hummel has played his best ball down the stretch, but he is coming off a tough two games in the Big Ten tourney, where he scored 10 points in a win over Nebraska and just six in a loss to Ohio State. His cranky knees aren?t equipped to play games close together. Hummel has to pour it all out vs. St. Mary?s. If Purdue wins, will he have any legs left for another game?

X-factor: Lewis Jackson. Like Hummel, Jackson is a senior who wants to lay it all on the line. Last March was a massive disappointment, losing in the second round to VCU. Purdue may be out after one game this March unless Jackson is able to penetrate for some layups, or penetrate and kick out to an open shooter like Ryne Smith and D.J. Byrd , who need to have hot hands from the arc. LewJack also must play good defense on St. Mary?s Dellavedova.