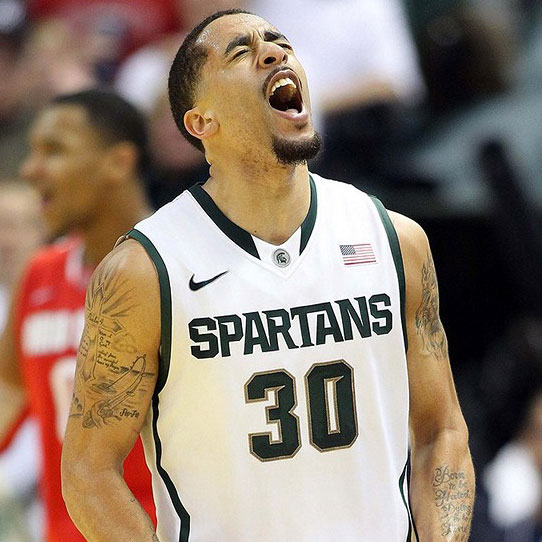 Here's my look at Michigan State as we head into the Spartans' Friday night game against Long Island. Want to know a little bit about Long Island? See what Brent Yarina wrote about the Blackbirds.

How far can it go? The Final Four. Tom Izzo has shown he knows how to navigate the waters of the Big Dance. Look at the guy?s resume-a national title in 2000 and six Final Fours. This is a classic Izzo team, meaning it plays suffocating defense, rebounds with a passion and plays all out all of the time. And Draymond Green injects the needed leadership. It all begins with an opening game vs. No. 16 Long Island University and star Julian Boyd. Greater challenges loom after that speed bump, including possible matchups with No. 8 Memphis; No. 4 Louisville; No. 2 Missouri and No. 1 Kentucky on the way to the title game.

Best second-round matchup: If I am Tom Izzo, I would prefer to play No. 9 Saint Louis as opposed to No. 8 Memphis. The Billikens are well-coached by Rick Majerus-who took Utah to the 1998 Final Four–but it?s not an overly talented team. Led by hard-working forward Brian Conklin, Saint Louis wins with defense-and will not out score anyone as it makes its first Big Dance appearance since 2000. Conversely, Josh Pastner?s Tigers can get up and down the floor and would appear to be more dangerous.

Chance to advance to Sweet 16: Excellent. A No. 1 seed never has lost to a No. 16. Since 1985 only 11 have lost in their second game to a No. 8 or No. 9 seed. The last No. 1 seed to be dumped in its second game was Kansas by Northern Iowa in 2010. Still, the Spartans need to be wary, especially if they play Memphis. The Tigers have lost just three times since Christmas. And those defeats have been by an aggregate six points. Per usual, this is an athletic Memphis team that can score, led by Will Barton and Tarik Black. If MSU plays Saint Louis, the Spartans should be able to overwhelm the Billikens with their size, depth and athletic ability. But it would be a fun coaching matchup between Majerus and Izzo.

Who needs to shine: Draymond Green. No shock here, huh? The Big Ten Player of the Year and Big Ten tourney MVP is what they call a "baller," a guy who does a bit of everything and defies classification. Even when the senior is not scoring a lot, Green finds a way to impact-like in a Big Ten tourney semifinal game vs. Wisconsin when he had just 14 points but 16 rebounds. And on top of his profound skills, Green is an unparalleled leader with an unmatched will to win.

X-factor: With freshman Branden Dawson out after suffering a season-ending knee injury in the regular-season finale vs. Ohio State, the Spartans need senior guard Brandon Wood to shine. He was at his best in the Big Ten title game victory vs. Ohio State, when he tallied a season-high 21 points, showing aplomb as a penetrator and shooter. Michigan State is not an overly talented offensive team-and even less so without Dawson. That?s what makes Wood?s performance in March that much more vital. If he shoots well, it will open space in the paint for monsters like Adreian Payne and Derrick Nix.