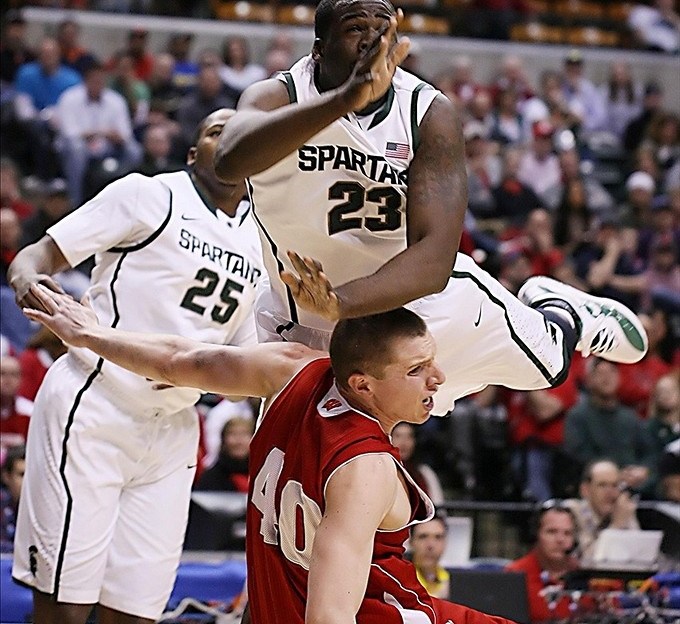 No. 8 Michigan State went into the locker room with the momentum and came out of the second half flying as well, which allowed the Spartans to grab a 65-52 victory over No. 12 Wisconsin on Saturday at Bankers Life Fieldhouse in Indianapolis. Trailing 20-9 with 9:44 to go in the first half, Michigan State (26-7) went on a 37-7 run to seize a 19-point advantage with 16:52 in the game. Get BTN.com Senior Writer Tom Dienhart?s take on the game from courtside inside this post plus full recaps, videos, and more.

Tom Dienhart's key Michigan State player: Yes, it wasn?t vintage Draymond Green from a scoring standpoint, but the senior found a way to contribute in a number of ways. Green was a monster on the glass, grabbing 16 rebounds. He also handed out five assists, blocked three shots and finished with a team-high 14 points to help Michigan State topple Wisconsin for a third time this season. Green?s defense also played a role in Michigan State limiting the Badgers to 34.7 percent shooting.

Tom Dienhart's key Wisconsin player: Jordan Taylor led the way with 19 points, but Rob Evans had a better all-around game. The junior did what he could, pushing the Badgers out to an early lead with seven quick points. Evans finished with 18 points and five rebounds, but it wasn?t enough, as Wisconsin was outscored 22-6 in the paint and out rebounded 29-21.

Tom Dienhart's key moment: Wisconsin jumped out to a 9-0 lead. But that was the highlight for the Badgers, as Michigan State outscored Wisconsin, 35-16, the rest of the first half to take a 35-25 halftime edge. And the Spartans-whose lead was as big as 19 at one point–did this with Draymond Green scoring just two first-half points and Keith Appling just four. The Badgers cut the MSU lead to 46-40 at the 12:20 mark of the second half, but the Spartans pulled away again down the stretch by outscoring Wisconsin 19-12 to seal victory.

What?s next for Michigan State? The Spartans continue to roll after finishing the regular-season on a two-game losing skein-falling at Indiana and at home vs. Ohio State on Senior Day. Michigan State is trying to win its first Big Ten tourney since 2000, when it also won the national championship. The Spartans will meet the winner of No. 2 Michigan-No. 3 Ohio State in the championship game on Sunday. At stake for Michigan State could be a No. 1 seed in the NCAA tourney.

What?s next for Wisconsin? The Badgers will await their NCAA seed on Selection Sunday, exiting the Big Ten tourney after a win vs. Indiana on Friday and the loss today. Wisconsin figures to head to the Big Dance as a No. 4 or 5 seed, taking some momentum with six wins in their last nine games. This was the farthest Wisconsin advanced in the Big Ten tourney since winning the event in 2008, suffering first-round losses each of the three seasons before this year.

FINAL RECAP: No. 8 Michigan State went into the locker room with the momentum and came out of the second half flying as well, which allowed the Spartans to grab a 65-52 victory over No. 12 Wisconsin on Saturday at Bankers Life Fieldhouse in Indianapolis. Trailing 20-9 with 9:44 to go in the first half, Michigan State (26-7) went on a 37-7 run to seize a 19-point advantage with 16:52 in the game. Draymond Green sparked the Spartans, as he scored 14 points, hauled in 16 rebounds, and contributed five assists in the win.

Keith Appling shot 3-of-5 from the field and scored 13 points for Michigan State. The Spartans shot 50 percent from the field (21-of-42). Michigan State went 17-of-23 from the charity stripe as a team (74 percent). More Michigan State scoring came from Austin Thornton, who scored 12. Ryan Evans had 18 points and grabbed five rebounds for Wisconsin (24-9) in the game. The Badgers struggled from the floor, shooting 35 percent (17-of-49). Wisconsin also got a double-digit effort from Jordan Taylor, who scored 19. The Spartans won the rebounding battle en route to victory, pulling down 29 boards to 21 for the Badgers.

HALFTIME RECAP: No. 8 Michigan State found itself trailing No. 12 Wisconsin late in the first half, but a 26-5 run allowed the Spartans to take a 35-25 lead into halftime. Trailing 20-9, the Spartans used a 13-0 run to blow past the Badgers and take a two-point lead. Draymond Green, the leading scorer this season for Michigan State, has only two points in the first 20 minutes. Michigan State goes into the break with the offensive rebounding advantage, with four to Wisconsin's four. The Spartans' Derrick Nix already has nine points and four rebounds. The Badgers' Ryan Evans had a big first half, with nine points and five rebounds.

Considering Dawson is out, MSU's interior defense has been exceptional. Wisconsin shooting 30 percent on 2s. #b1gtourney