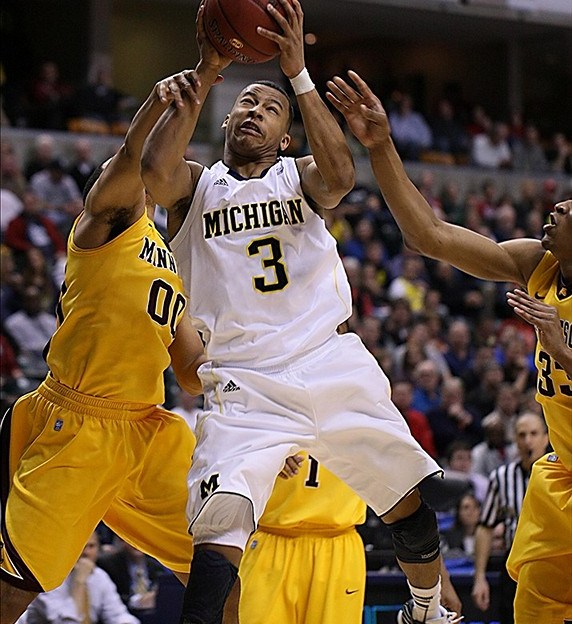 Trey Burke scored 30 points to lift No. 13 Michigan to a 73-69 overtime win over Minnesota on Friday in the Big Ten Tourney. Michigan (24-8) got solid performances from both Burke and Tim Hardaway Jr. Burke had three assists and knocked down 11-of-14 shot attempts. Hardaway Jr. scored 20 points and corralled five rebounds. Get BTN.com Senior Writer Tom Dienhart's take on the game from courtside inside this post plus full recaps, videos, and more.

Tom Dienhart's key Michigan player: How good is Trey Burke? We saw it on this night, as the freshman phenom was almost a one-man wrecking crew en route to tallying 30 points on 11-of-14 shooting. Burke also dished three assists and played all 45 minutes. He was all over the court, a whirling dervish who penetrated without impunity and also drained the jumper (three-of-four from three-point range) to help Michigan move to 3-0 in overtime this season.

Tom Dienhart's key Minnesota player: Props to freshman sensation Dre Hollins, who led the Gophers with 21 points. But Rodney Williams provided the energy and mojo on this night. The high-flyer did his thing where he played above the rim, embarrassed a few players with terrifying blocks and generally looked like a future NBA Slam Dunk contest winner as he sent BTN announcer Gus Johnson into delirium. The junior?s damage: 20 points, six rebounds, four assists, three blocks, two steals. Three words: 1. Stat 2. Sheet 3. Stuffer.

Tom Dienhart's key momentt: Evan Smotrycz took a pass from Stu Douglass and drained a three-pointer with 19 seconds left in regulation to forge a 56-56 tie. After the Wolverines snuffed out Minnesota?s last gasp in regulation, the teams went to overtime. Once in the extra session, the Wolverines assumed command, outscoring the Gophers, 17-13.

What?s next for Michigan? The Wolverines avoided a disappointing loss that could cost the club a seed in the NCAA tourney. Michigan is hot, having won eight of its last 10 following this triumph. The Wolverines won the first Big Ten tourney in 1998-but they haven?t been back to the championship game since. Could this be Michigan?s year? The program already has won its first Big Ten regular-season crown in 26 years. Up next: A date with Purdue or Ohio State in the semifinals on Saturday. Delicious.

What?s next for Minnesota? The Gophers ruined Northwestern?s tourney in overtime, but they couldn?t end Michigan?s party in Nap Town in overtime as Minnesota squandered a 54-45 lead with 4:33 to go. Minnesota never has won this event, but had a Cinderella ride to the title game in 2010. The Gophers finish the season 19-14. Is this an NIT team? Tough to say. Minnesota is left to wonder ?what-if? as it played most of the season without its star Trevor Mbakwe, who suffered a season-ending knee injury in November. In the end, this was a gutty game and season for the Gophers.

FINAL RECAP: Trey Burke scored 30 points to lift No. 13 Michigan to a 73-69 overtime win over Minnesota on Friday at Bankers Life Fieldhouse in Indianapolis in the Big Ten Tourney. Michigan (24-8) got solid performances from both Burke and Tim Hardaway Jr. Burke had three assists and knocked down 11-of-14 shot attempts. Hardaway Jr. scored 20 points and corralled five rebounds.

Rodney Williams contributed 23 points, yanked down six rebounds, contributed four assists, and shot 9-of-12 from the field for Minnesota (19-14) in the game. The Golden Gophers shot 9-of-23 from three-point range during the game, good for 39 percent. It was a team effort for Minnesota, as it had 17 assists on 24 baskets. The Golden Gophers were able to secure second chance opportunities, grabbing 10 offensive boards. Minnesota also got double-digit performances from Austin Hollins, who scored 11 and Andre Hollins, who scored 21.

The Golden Gophers lost despite outrebounding the Wolverines 30-22.

HALFTIME RECAP: Minnesota leads 23-20 at halftime after locking down No. 13 Michigan's offense, holding the Wolverines to 39 percent shooting and just seven field goals. The rebounding edge belongs with the Golden Gophers, by a 16-9 margin on the boards. Minnesota never trailed in the first half and led by as many as nine points.

Most of Michigan's offense has come from Trey Burke and Jordan Morgan, who have scored 16 of the team's 20 total points. Burke has scored 13 and Morgan has added three.

Rodney Williams led the way for the Golden Gophers in the first half, with eight points and four rebounds.

Michigan players' parents have said "rebound" about 3,000 times. They're not happy about Blue's work on the boards so far. #b1gtourney

#gophers hopeful Sampson plays. team doc telling me "he had swelling this morning. which affects his jumping & lateral movement" #B1Gtourney