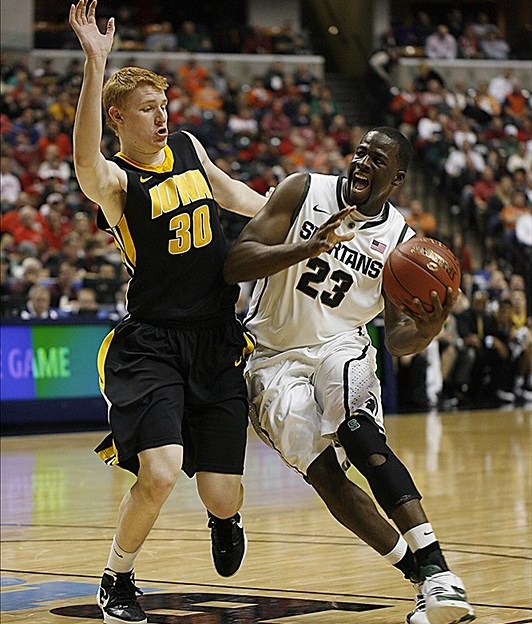 Draymond Green scored 21 points, grabbed 10 rebounds and handed out five assists as No. 8 Michigan State defeated Iowa 92-75 on Friday at Bankers Life Fieldhouse in Indianapolis in the Big Ten Tourney. Green and Adreian Payne had good games for Michigan State (25-7). Green went 8-of-13 from the field. Payne contributed 16 points, hauled in seven rebounds, and knocked down 7-of-8 shot attempts. Get BTN.com Senior Writer Tom Dienhart's take on the game from courtside inside this post plus full recaps, videos, and more.

Tom Deinhart's key player for Iowa: Freshman Josh Oglesby led the way with 20 points, hitting seven-of-nine shots. But red-hot sharp-shooter Matt Gatens was kept in check, finishing with just 10 points, seven of which came from the free-throw line. The senior was just one-of-four from three-point range, as the Hawkeyes were out rebounded, 36-24, and out scored in the paint, 44-20.

Tom Deinhart's key player for Michigan State: You could have picked any number of guys, but let?s go with Draymond Green. He played like the Big Ten player of the year, as the Hawkeyes had no answer for him on the interior. Green hit eight-of-13 shots on the way to scoring 21 points. Green did a bit of everything, also grabbing 10 rebounds with five assists, three blocks with a steal. It?s the sixth time Green has had 20-10-5 this season, more than any other Division I player in the nation this season. He was a man among boys today.

What?s next for Iowa? The Hawkeyes finished 17-16, coming on strong the second half of the Big Ten season in going 6-5 in their last 11 games. But Iowa?s season may be over, as postseason bids for 17-16 teams aren?t plentiful. Still, Fran McCaffrey?s crew looks to have a bright future with lots of good young talent in Aaron White, Zach McCabe, Melsahn Basabe, Roy Devyn Marble and Oglesby-who all are freshmen or sophomores.

What?s next for Michigan State? The Spartans ended a two-game losing skid (Indiana and Ohio State) with an emphatic triumph over Iowa in their first-round tourney game. Michigan State will play the winner of the No. 4 Wisconsin-No. 5 Indiana game on Saturday in the semifinals, as the Spartans search for their first Big Ten tourney title since 2000. That?s also the last time MSU won the national title.

Green and Adreian Payne had good games for Michigan State (25-7). Green went 8-of-13 from the field. Payne contributed 16 points, hauled in seven rebounds, and knocked down 7-of-8 shot attempts.

Josh Oglesby scored 20 points, shot 7-of-9 from the field, and shot 5-of-7 from long range for the Hawkeyes in the game. Iowa shot 10-of-20 from three-point range during the game, good for 50 percent. The Hawkeyes went 19-of-26 from the charity stripe as a team (73 percent). Iowa made the extra pass all game long, tallying 15 assists on 23 baskets. The Hawkeyes also got double-digit efforts from Matt Gatens, who scored 10 and Zach McCabe and Roy Devyn Marble, who each scored 13.

Winning the rebounding battle was a key to victory for Michigan State as it outrebounded Iowa 35-21.

HALFTIME RECAP: Adreian Payne scored 12 points for No. 8 Michigan State in the first half to carry the Spartans to a 55-39 lead over Iowa. Payne and Keith Appling are leading the way for Michigan State. Payne grabbed six rebounds and shot 5-of-5 from the field. Appling scored 10 points, grabbed three rebounds, had three assists, and shot 2-of-2 from the field.

The game was tied 22-22 before the Hawkeyes went into a funk, going the next 1:29 without scoring, and allowing the Spartans to take a 31-22 lead in the first. Michigan State had five offensive rebounds in the first half and eight Michigan State players have scored.

Matt Gatens, the leading scorer this season for Iowa, has not made much of an impact through the first 20 minutes. With three points, the senior will need a strong second half to get to his usual level of production (15.9 points per game). The Hawkeyes hit five threes in the first half, shooting 45 percent from deep. Iowa moved the ball in the first half, accounting for eight assists on 12 field goals. Seven Iowa players scored in the half.

Zach McCabe led the way for the Hawkeyes in the first half, with 11 points.

Draymond Green with 20 points, 10 rebounds and five assists for sixth time this season. Most by a Division I player this season. #B1GTourney

Looks like that two-game losing skid is gonna end for the #Spartans. #Hawkeyes are in a big hole. #B1GTourney

The #B1GTourney record for points in a game is 94. Done four times. Will look up most points in a half. #MichiganState #MSU #Spartans #Iowa