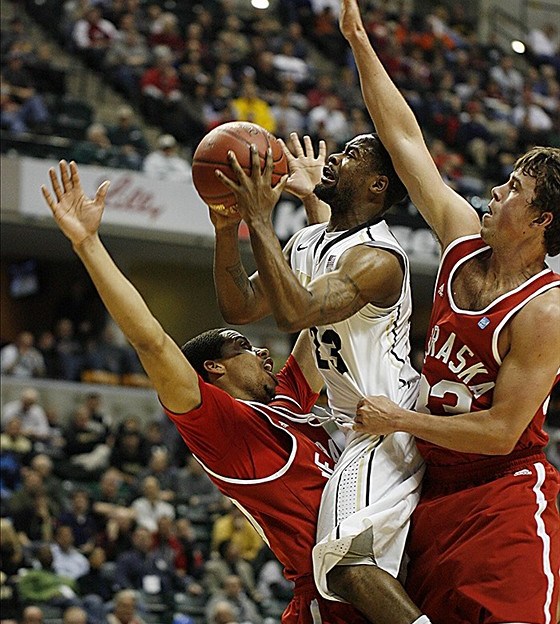 Anthony Johnson scored 17 points and grabbed six rebounds and Terone Johnson added 16 points and six boards as they teamed up to lead Purdue to a 79-61 victory over Nebraska on Thursday at Bankers Life Fieldhouse in Indianapolis in the Big Ten Tourney. Get BTN.com Senior Writer Tom Dienhart's take on the game from courtside inside this post plus full recaps, videos, and more.

Tom Dienhart's key Purdue player: There were several, as Terone and Anthony Johnson each had nice games. Anthony led the way with a career-high 17 off the bench, while Terone had 16. But I?m going with sweet-shooting Ryne Smith, who scored all of his points on three-pointers (5-of-8) on his way to notching 15 points on Robbie Hummel?s birthday. It?s Smith?s fourth double-figure game in the last six contests. Think the Toledo, Ohio, native will be fired up to face Ohio State?

Tom Dienhart's key moment: A Bo Spender layup gave Nebraska a 12-8 lead at the 14:43 mark of the first half. But the Boilermakers went on a 17-0 run to take a 25-12 lead with 6:47 left. Purdue never looked back. Anthony Johnson led the way with seven points during the decisive run that was fueled by three 3-pointers.

What?s next for Purdue? Survive and advance, as from here on out, everything is gravy for the Boilermakers. Yes, a hot-shooting Purdue team could make a Cinderella run to the title game. But the Boilers? chief goal is to improve its NCAA seed in hopes of avoiding the horrid Nos. 8-9 spots. A win over No. 3 Ohio State certainly would help Purdue?s resume.

What?s next for Nebraska? With a 12-18 record, the Cornhuskers? season is over. And the future of Doc Sadler may be decided soon in what was a rough maiden Big Ten voyage for the Husker hoop program.

FINAL RECAP: Anthony Johnson scored 17 points and grabbed six rebounds and Terone Johnson added 16 points and six boards as they teamed up to lead Purdue to a 79-61 victory over Nebraska on Thursday at Bankers Life Fieldhouse in Indianapolis in the Big Ten Tourney.

Purdue (21-11) hit 56 percent of its field goals (28-of-50). The Boilermakers were hot from long range, hitting 13-of-25 threes for a 52 percent night from beyond the arc. Purdue also got double-digit performances from Ryne Smith, who scored 15 and Robbie Hummel and D.J. Byrd, who each scored 10.

Toney McCray had 13 points, corralled eight rebounds, contributed four assists, and knocked down 5-of-9 shot attempts for Nebraska (12-18) in the loss. More Nebraska scoring came from Dylan Talley, who scored 10 and Bo Spencer, who scored 22.

Winning the rebounding battle was a key to victory for the Boilermakers as they outrebounded the Cornhuskers 28-22. Nebraska has now lost its last five games.

HALFTIME RECAP: Things haven't started too well for Nebraska against Purdue and it is down 39-31 going into the second half. In the first 20 minutes, Bo Spencer scored 14 points and shot 5-of-8 from the field. The Boilermakers have the lead at halftime due in large part to their ability to get to the foul line. Purdue went 8-for-13 on free throws in the first half.

Trailing 12-8, the Boilermakers used a 17-0 run to blow past the Cornhuskers and take a 13-point lead.

Purdue fired often and fired with accuracy from distance, hitting 54 percent (7-of-13) of its three-point attempts. The Boilermakers played team basketball in the first half, to the tune of nine assists on 12 field goals.

Nebraska has been effective inside, making 8-of-13 two-point field goals, but the Cornhuskers have struggled on the perimeter, shooting 3-for-12 from three-point range. Ryne Smith is putting together a nice game so far for Purdue. The senior has nine points.

If Terone Johnson is hitting threes, Nebraska is in trouble. #B1Gtourney #Huskers #Purdue