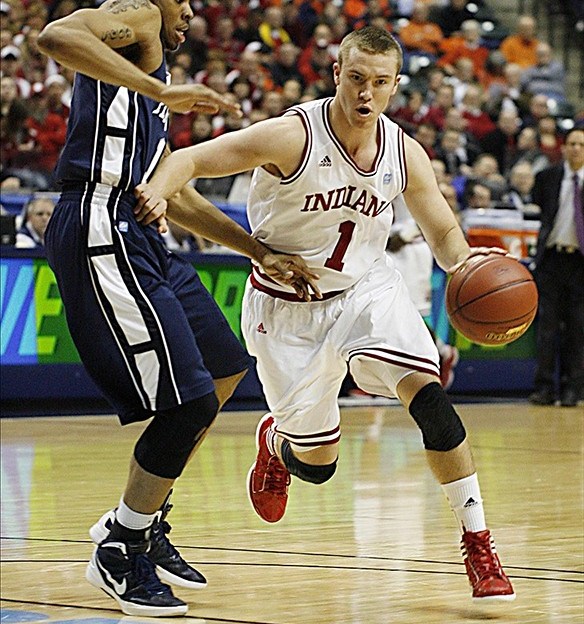 Cody Zeller scored 19 points and grabbed nine rebounds and Jordan Hulls added 20 points as they teamed up to lead No. 15 Indiana to a 75-58 victory over Penn State on Thursday at Bankers Life Fieldhouse in Indianapolis in the Big Ten tourney. Indiana plays Wisconsin on Friday. When asked by BTN's Lisa Byington after the game about Verdell Jones' injury, Indiana coach Tom Crean said, "It's not good." Get BTN.com's Senior Writer Tom Dienhart's take on the game from courtside inside this post plus full recaps, videos, and more.

Tom Dienhart's key Penn State player: Tim Frazier. Per usual, the junior star-no, superstar-did it all for the Nits. He entered the game leading the team in scoring, assists, steals and rebounds-yes, rebounds. And Frazier delivered again, tallying 26 points with four assists and five steals.

Tom Dienhart's key moment: Will Sheehey hit a layup and was fouled with 16:18 left in the game. He missed the free throw but still pushed IU to 45-34 lead, its first double-figure margin of the game. The Hoosiers never looked back, outscoring the Nits 37-26 in the second half after holding a 38-32 halftime lead.

What?s next for Indiana? The Hoosiers arrived in Nap Town as a trendy pick to win this event, winning seven of eight. Make that eight of nine now following a resounding victory over Penn State that saw IU out rebound Penn State (38-20) and hit eight-of-18 three-pointers and 29-of-36 free throws. The victory moves the Hoosiers on to play No. 4 Wisconsin on Friday in what figures to be one of the better matchups of the day.

And, frankly, you have to like Indiana?s chances. The teams met just once this season, with the Badgers taking a 57-50 win in Madison on January 26. Indiana will continue its march in its quest to win its first Big Ten tourney. The Hoosiers have advanced to just one title game, losing to Iowa as a No. 4 seed in 2001. If it makes a run, Indiana may be without Verdell Jones, who went down with an apparent knee injury in the first half. Still, this is a deep and motivated club.

What?s next for Penn State? Last year, the Nits were a No. 6 seed Cinderella, beating Indiana on the way to advancing all the way to the Big Ten tourney title game where they lost to Ohio State. But, there will be no such run this season. The loss means the Nittany Lions are done for the season with a 12-20 mark. But the future looks bright with Tim Frazier back for his senior season in 2012-13 along with some promising youngsters like Jon Graham, Ross Travis and Trey Lewis–all freshmen who started today–as Pat Chambers embarks on his second season at the helm.

FINAL RECAP: Cody Zeller scored 19 points and grabbed nine rebounds and Jordan Hulls added 20 points as they teamed up to lead No. 15 Indiana to a 75-58 victory over Penn State on Thursday at Bankers Life Fieldhouse in Indianapolis in the Big Ten Tourney.

Indiana had trouble finding its touch, shooting just 37 percent (19-of-52) from the field. The Hoosiers were on fire from beyond the arc during the game, shooting 44 percent (8-of-18). Indiana went 29-of-36 from the charity stripe as a team (81 percent). Christian Watford had a double-double for the Hoosiers. He had 14 points and yanked down 10 rebounds.

Tim Frazier scored 26 points, handed out five assists, and hit 4-of-6 three-pointers for Penn State (12-20) in a losing effort. The Nittany Lions struggled from the floor, shooting 35 percent (19-of-55). Penn State was hot from long range, hitting 8-of-17 threes for a 47 percent night from beyond the arc. The Nittany Lions also got a solid contribution from Trey Lewis, who scored 11.

Winning the battle on the boards was crucial for Indiana as it grabbed 38 rebounds to 28 for Penn State. The loss extends the Nittany Lions' streak to five games, but the Hoosiers have now won five games in a row.

HALFTIME RECAP:  No. 15 Indiana took full advantage of the stellar combination of Cody Zeller and Jordan Hulls, ending the first half against Penn State up 38-32. Zeller scored 12 points and grabbed six rebounds. Hulls scored 13 points and shot 5-of-7 from the field.

So far, Tim Frazier's the Nittany Lions team trails, but he has 19 points. The Hoosiers are dominating the rebounding battle so far, with a 18-12 margin.

An aggressive offense and the ability to get to the charity stripe allowed Indiana to take a halftime lead. Through 20 minutes of play, the Hoosiers are 13-for-15 from the free throw line. Penn State went into a funk with the score 22-21, going 2:33 without a point while Indiana went on a 9-0 run to open up a 10-point lead.

The Hoosiers made it rain from long range, shooting 56 percent (5-of-9) from three-point land. After already giving up six offensive rebounds to Indiana, the Nittany Lions will have to keep the Hoosiers off the boards in the second half. Indiana moved the ball in the first half, accounting for six assists on 10 field goals.

Penn State hit four threes in the first half, shooting 50 percent from deep.

VIDEO HIGHLIGHTS: Posted during and after the game.

What do Big Ten coaches think when they look at Indiana's lineup and see zero seniors? #B1Gtourney

Christian Watford is 0 for 4 with 4 points but still is contributing with 3 boards and 2 assists. #B1GTourney

It's tough to win four games in four days, but Indiana does have the all-important depth on its side. #B1Gtourney

Zeller parents told me they will drive to Atlanta after this is done. Stay w/ Tyler unless #hoosiers get to Sunday. #B1Gtourney