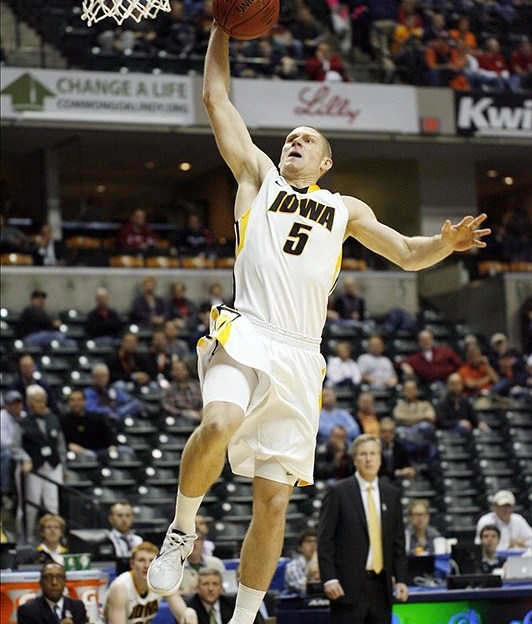 ]Meyers Leonard scored 18 points and grabbed six rebounds, but it wasn't enough to lead Illinois past Iowa, as Illinois (17-15) fell 64-61 on Thursday at Bankers Life Fieldhouse in Indianapolis in the Big Ten Tourney. Get BTN.com's Senior Writer Tom Dienhart's take on the game from courtside inside this post plus full recaps, highlights and postgame videos, and more.

Tom Dienhart's  key moment: Illinois took a 40-33 lead at the 16:54 point of the second half. That?s when the Hawkeyes hit the accelerator and took off to outscore Illinois 31-21 the rest of the way. The Illini got sloppy with the ball on a few possessions down the stretch and stopped crashing the glass.

Down 60-56 with 1:42 to go, Illinois had it chances late. But in one three possession stretch, the Illini saw Brandon Paul whistled for travelling, Paul miss a shot that went out of bounds and Paul throw an inbound pass that was intercepted. In the waning moments, Iowa?s Matt Gatens salted it away at the free throw line to claim a 64-61 victory.

Illinois did not have one free throw attempt in the entire game, the first time that has ever happened in the Big Ten Tournament.

What?s next for Iowa?  The No. 8 Hawkeyes will take on No. 1 Michigan State on Friday. Iowa played the Spartans just once this season, dropping a 95-61 decision at East Lansing. It that game Draymond Green went off for 22 points and grabbed nine boards, as MSU limited Iowa to 36.5 percent shooting while shooting 61 percent. But this is a hot Hawkeye team that has won six of its last 10 games after a 3-6 start in Big Ten action. And-who knows?-maybe Iowa can capture the mojo the 2001 team did in running away with the Big Ten tourney title as a No. 6 seed, the lowest seed ever to win it all.

What?s next for Illinois? The Illini went 2-12 in its last 14 contests, as the world wonders and waits to see what the future holds for coach Bruce Weber following a disappointing season. Illinois will miss the NCAA tourney for the second time in three seasons. The school has said it would accept an NIT bid if one was extended. But will it happen?

FINAL RECAP: Meyers Leonard scored 18 points and grabbed six rebounds, but it wasn't enough to lead Illinois past Iowa, as Illinois (17-15) fell 64-61 on Thursday at Bankers Life Fieldhouse in Indianapolis in the Big Ten Tourney.

Matt Gatens sparked Iowa (17-15), as he scored 20 points, corralled three rebounds, and made 7-of-12 shots from the floor in the victory. It was a team effort for the Hawkeyes, as they had 15 assists on 23 baskets. Iowa also got a double-digit contribution from Aaron White, who scored 13.

The Fighting Illini shared the ball to the tune of 18 assists on 27 baskets. Illinois also got double-digit games from D.J. Richardson and Joseph Bertrand, who each scored 11.

Free throws played a key role in the outcome, as the Hawkeyes not only went to the line 19 more times than the Fighting Illini, but made the most of their opportunities, shooting 12-of-19. Illinois committed 13 fouls and shot 0-of-0 from the line.

HALFTIME RECAP: Meyers Leonard scored 10 points for Illinois as the Fighting Illini lead Iowa 31-27 at the half. The Fighting Illini dominated on the glass in the first half, outrebounding the Hawkeyes 18-8. Trailing 14-8, Iowa used an 8-0 run to blow past Illinois and take a two-point lead.

The Hawkeyes played team basketball in the first half, to the tune of seven assists on 11 field goals. Seven Iowa players scored in the half. Iowa was able to put the clamps on the Fighting Illini's leading scorer, Brandon Paul. The junior is averaging 15 per game for the year, but has just two points at the break. Illinois has been effective inside, making 11-of-16 two-point field goals, but the Fighting Illini have struggled on the perimeter, shooting 3-for-12 from three-point range. Illinois shared the ball, finishing with 12 assists on 14 field goals in the first half.

Matt Gatens is putting together a nice game so far for the Hawkeyes. The senior has nine points and three rebounds.

PREVIEW: Keep your eye on the matchup in the backcourt between the Hawkeyes? Matt Gatens and the Fighting Illini?s Brandon Paul. Each player is the straw that stirs their team?s respective drink. Gatens was one of the hottest players coming down the stretch. Read more from Dienhart.

Illinois is off to a good start; need to keep Meyers Leonard involved. He had a great game vs. Iowa the last time out with 22 points.