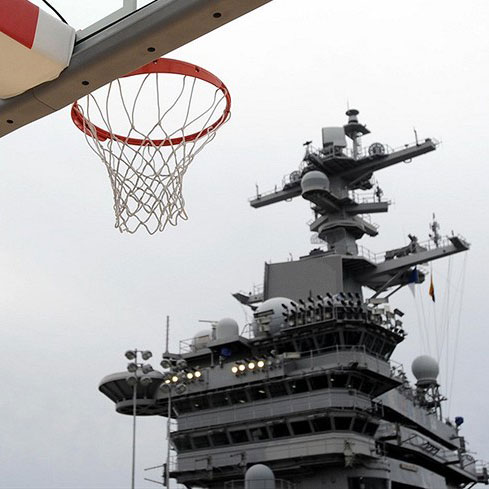 When the season dawned back in November, most experts felt Ohio State would win the crown. Well, the Buckeyes needed some late-season heroics to take a share of what was a three-way tie between themselves, Michigan State and Michigan. In between, there were a lot of highs and lows in an exciting Big Ten title chase. So here?s a look at my top 10 moments from the 2011-12 season.

Don't forget: As we put the regular season behind us and dive right into Thursday's tournament games, I?ll be joining BTN.com?s Big Ten Geeks bloggers in a live blog from courtside at Indianapolis for every game. Come talk with us during the games on the live tourney blog here or the live blog page on BTN?s Facebook. Find more our full interactive bracket and more handy links over here.

And now, the moments.

November 11. What a way to start the season, playing on an aircraft carrier vs. North Carolina. But the outcome wasn?t great for Michigan State, which dropped a 67-55 decision to the No. 1 ranked Tar Heels on the deck of USS Carl Vinson with President Obama watching in a game dubbed the ?Carrier Classic.? The Spartans followed this loss with a 74-69 defeat to Duke. But after that 0-2 start, Michigan State ripped off 15 straight wins.

November 27: In just the seventh game of the season, star Minnesota forward Trevor Mbakwe suffered a season-ending knee injury fighting for a rebound vs. Dayton. With Mbakwe?s loss, the Golden Gophers were minus their best player and heart and soul. They also saw their NCAA hopes take a big hit during what melted into an 18-13 season (6-12 Big Ten).

November 30: For a third year in a row, the Big Ten won the ACC/Big Ten challenge. And it wasn?t even close, with the Big Ten claiming the crown with an 8-4 mark in the head-to-head matchup, its biggest margin of victory in a series that dates to 1999. Most impressive was Ohio State?s 85-63 whipping of No. 4 Duke in Columbus. Other strong wins: Purdue over Miami; Michigan State over Florida State. It set the tone for a Big Ten conference that was considered to be the best in the nation.

December 10: It was the shot heard round the hoop world. With the game clock nearly at zero, Hoosier forward Christian Watford drilled a long three-pointer to give Indiana a scintillating 73-72 victory over No. 1 Kentucky. That set off pandemonium in Assembly Hall, as students rushed the court. Indiana would go on to beat the No. 2 team (Ohio State) and No. 5 team (Michigan State), marking the first time in school annals that Indiana had beaten three top five teams in the regular season in the same campaign.

January 3: Michigan State was clinging to a 63-60 lead in overtime at Wisconsin. That?s when the Badgers? Ryan Evans launched a desperation three-pointer that hit, apparently tying the game and apparently forcing a second overtime. However, the shot was waved off after officials said it came after the final buzzer.

January 10: It was one of the singular best efforts of the season when Illinois? Brandon Paul went off for 43 points in a 79-74 upset triumph over No. 5 Ohio State. How hot was Paul? His night was epitomized when he nailed a three-pointer from the corner with Aaron Craft?s hand in his face late in the game to seal the victory. Paul sank 11-of-15 shots, including 8-of-10 from three-point land and 13-of-15 from the line. Only two other Illinois players ever had scored more in a game than Paul. The win pushed Illinois to 4-1, but the season unraveled after that.

January 10. It was an outburst heard ?round the nation, as Iowa coach Fran McCaffrey slammed a chair during a conniption in a 95-61 loss at Michigan State. McCaffrey was unapologetic about his tirade, which came after he was assessed a technical. McCaffrey said he was going to continue to ?coach with passion.? And he did, leading the Hawkeyes to a strong finish. The chair was auctioned off to charity, too.

January 12: Let?s go ahead and call it the biggest upset of the season, as unranked Minnesota invaded Indiana and took a 77-74 victory over the No. 7 Hoosiers. Making the Golden Gophers? win more improbable was the fact they brought a four-game losing skid into Bloomington. It turned out to be the only loss in Assembly Hall for Indiana. The Hoosiers were hurt by 16 turnovers and four-of-18 shooting from three-point range.

February 15: Following a tough 67-62 loss at home to Purdue, Illini coach Bruce Weber endured a post-game meltdown with some frank comments in the raw emotion of defeat. Among other things, Weber said: "You have to develop a culture and I think maybe the last three years all I did was worry about winning instead of developing a culture and a toughness. That's my fault. It's just sad." He added: "I feel really bad for my staff." Weber later apologized.

February 18: Northwestern toppled Minnesota, 64-53, in Evanston. But more important were the 18 points tallied by John Shurna that moved him past Billy McKinney as the Wildcats? all-time leading scorer. McKinney?s standard stood for 35 years. Shurna?s record-breaker came on a three-pointer from the top of the key halfway through the second half. Shurna finished the game with 1,902 points. It should be noted that when McKinney played (1975-78), he didn?t have the benefit of a three-point shot.

March 4: The final day of the Big Ten regular season was zany. Michigan State began the day with a one-game edge over Ohio State and Michigan – beat the Buckeyes on Senior Day in East Lansing, and the outright Big Ten crown would belong to the Spartans. But Ohio State stunned Michigan State, 72-70. And earlier in the day, the Wolverines kept pace by winning at Penn State. So, the three schools ended up sharing the Big Ten championship. And for Michigan, that was noteworthy, as it was the program?s first regular-season title since 1985-86. For Ohio State and Michigan State, it was old hat. This was the Buckeyes? fifth championship in seven seasons; it was the Spartans? third in four years and Tom Izzo?s seventh.