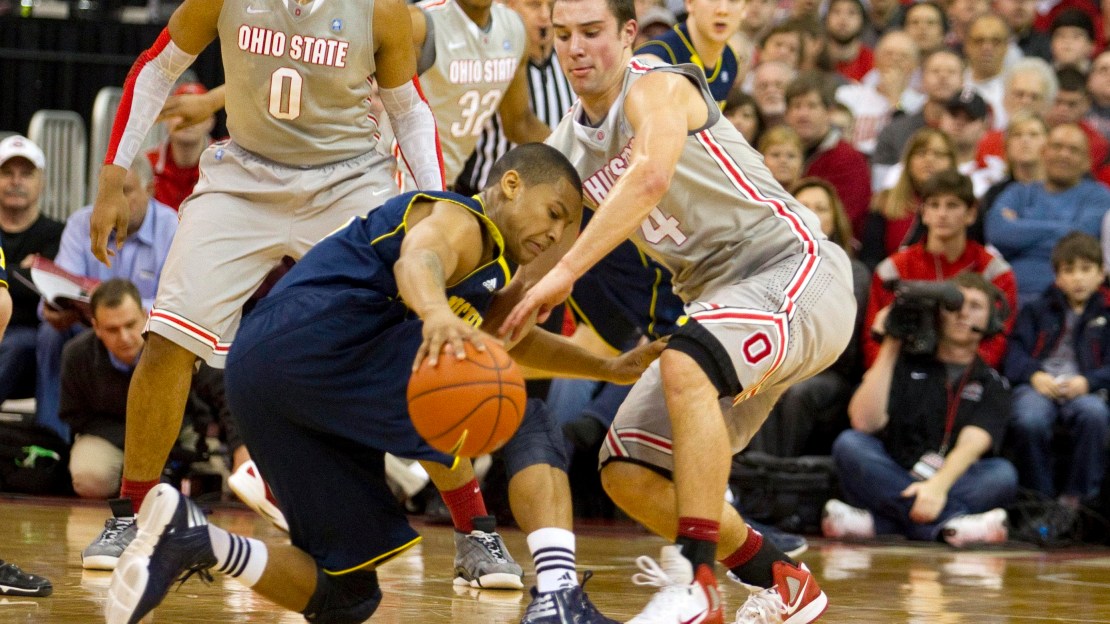 Aaron Craft is a very good defensive player. Let?s get that out of the way. Whatever you think of the next few paragraphs, remember that we all agree that Craft?s defense would improve just about any collegiate basketball team.

But the sophomore guard just earned some hardware that bestowed loftier praise than just being ?very good.? Indeed, it is the opinion of Big Ten coaches that Craft is the conference?s best defensive player. At the risk of dismissing the opinions of 12 men who know a lot about basketball, I think they got this one wrong.

Measuring defense is not easy. Dean Oliver came up with the Stops metric which has some appeal in that it shows correlation with defensive efficiency year-over-year. The more Stops a team keeps, the better the defense holds up. If a bunch of Stops are lost to graduation or early-entry, the defense slides. That doesn?t make it the be-all, but it?s something.

And according to Stops, Aaron Craft isn?t in the conversation of the Big Ten?s best defensive player:

Now, some explanation. For one, Stops is heavily dependent on defensive rebounds, so big men naturally have an advantage. Before you go crying foul, ask yourself if there?s anything wrong with that. Every year we see 18-year olds who are offered a free collegiate education to play basketball, and these guys can barely dribble and can?t shoot outside of 10 feet. But they?re also really tall. There?s a reason for that. In comparison, how many 6-0 guards are there in Division I with similar skillsets?

All of this is to say I?m not bothered in the least by the rebounding favortism displayed by Stops. Rebounds are important, in that they're the most reliable way to end an opponent's scoring opportunity. But what if we just restrict the universe to guards?

Let?s remember though that the only inputs for Stops are defensive rebounds, blocks, and steals. But there?s more to defense than that. Drawing charges, shutting down drives with help defense, and causing turnovers that don?t materialize as a steal, for instance. Plus, there?s the skill of not fouling. All of these things matter, too.

Unfortunately, only one of those things is measured, that being fouls. In that respect, Aaron Craft is nothing special compared to other point guards in the league (of course, the point guard position isn?t well-defined at Minnesota or Nebraska):

For this list, it?s better to be near the bottom. As the table shows, Aaron Craft is not shy about fouling. Again, this does not make him a bad defender, but it does make him a worse defender than an otherwise identical Aaron Craft that did not commit those fouls. That said, Craft does rate well in Stops when you restrict the pool to just point guards (he?s second, behind Richardson).

Not only that, but my personal choice for Defensive Player of the Year–Draymond Green–committed 3.14 fouls per 40 minutes in conference play. This is actually more exceptional than it sounds, because Green is quite often guarding players in the post, and that tends to be the place where fouls are drawn.

So what we know is that Craft can?t stack up to the league leaders in those areas that one can quantify (defensive rebounds, steals, blocks, and fouls). Again, there are lots of defensive plays that the box score doesn?t pick up, but exactly how many of those plays are happening? I submit that it can?t possibly be enough to overcome everything else (most notably, Green?s 116 rebound advantage).

I think it's accurate to say that Craft is a very good defensive player, a great one for his size and at the point guard position. But Defensive Player of the Year should be an award given without such qualifiers.