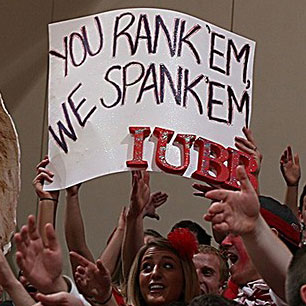 Who can forget Christian Watford?s long-distance dagger as the clock hit zero to lift Indiana over Kentucky and set off the part at Assembly Hall? What about William Buford?s Spartan-killing shot from the top of the key last Sunday to propel Ohio State over Michigan State to win a share of the Big Ten title?

Great moments in great games. As we approach the Big Ten Men's Basketball Tournament, I looked back at one wild Big Ten men's basketball season and laid out my top 17 games. Why 17? Because I can. Bonus: We included video clips, too. I list them in chronological order but you tell me which one ranks No. 1 via the comments box on this post or my Twitter home @BTNTomDienhart.

November 29: No. 2 Ohio State made it look easy vs. No. 3 Duke in Columbus, jetting to an 11-0 lead before cruising home with an 85-63 victory. Jared Sullinger led the way with 21 points with LeBron James and Dwyane Wade watching. William Buford added 20 points, while Deshaun Thomas had 18 and Aaron Craft 17 in this ACC-Big Ten Challenge game.

December 10: Unranked Indiana trumpeted its arrival with a miraculous 73-72 triumph over No. 1 Kentucky in Bloomington. Hoosier forward Christian Watford canned the memorable three-pointer to lift Indiana. The triumph triggered chaos in Assembly Hall, as students rushed the court. Five Hoosiers finished in double-figures, with Watford leading the way with 20 points.

December 31: Victor Oladipo streaked in for the go-ahead layup on a fast break with 36 seconds left to push No. 13 Indiana to a 74-70 win over No. 2 Ohio State in Bloomington. The Buckeyes were confounded by foul trouble. Indiana was paced by five players in double-figures, led by Jordy Hulls? 17 points. Indiana became the first Big Ten school to upset the nation?s No. 1 and No. 2 teams in the same season since 1952-53.

January 3: No. 10 Michigan State was clinging to a 63-60 lead in overtime at No. 18 Wisconsin. In the dying seconds, Badger big man Ryan Evans hit a desperation three-pointer to apparently tie the game. However, the shot was waved off after officials said it came after the final buzzer. The Spartans, who held Wisconsin to 33.3 percent shooting, were led by Draymond Green?s 18 points.

January 10: It was a night that had the college hoop world buzzing, as Brandon Paul exploded for 43 points to lead unranked Illinois to a 79-74 upset win over No. 5 Ohio State. No Big Ten player scored more in a game this season. Paul?s night was epitomized when he drained a three-pointer from the left corner with Aaron Craft?s hand in his face late in the game to seal the victory. Paul hit 11-of-15 shots, including eight-of-10 from three-point land and 13-of-15 from the line. Only two other Illinois players ever had scored more in a game than Paul. The win pushed Illinois to 4-1, but the season went south thereafter.

January 12: Unranked Minnesota strolled into Indiana and took a 77-74 triumph over the No. 7 Hoosiers in what may have been the biggest upset of the season. It turned out to be the only loss in Assembly Hall all season for Indiana. The Hoosiers were undone by 16 turnovers and four-of-18 shooting from three-point range. Minnesota entered the game on a four-game skid but was propelled by Austin Hollins? career-high 18 points.

January 14: Northwestern?s 81-74 win in Evanston ended No. 6 Michigan State?s 15-game winning skein. And the victory wouldn?t have been possible without a huge assist from an unlikely player: Davide Curletti, who in just his second career start tallied 17 points and grabbed six rebounds. John Shurna (22 points) and Drew Crawford (20) were their usual productive selves in this huge resume-building win for the Wildcats.

January 17: Trey Burke rushed toward the hoop in the final minute of a game that Michigan trailed by a point. That?s when he spotted Stu Douglass, who took a Burke pass and scored on a layup with 36.5 second remaining. The No. 20 Wolverines muted the No. 9 Spartans on their last possession to take a 60-59 victory in Ann Arbor. It was Michigan?s third win in a row over Michigan State after the Spartans had taken 18 of the previous 21 meetings.

January 18: Nebraska shocked the world with a stunning 70-69 victory over visiting No. 11 Indiana. The Hoosiers wasted a 13-point second-half lead en route to dropping their third game in a row. Jorge Brian Diaz hit two free throws with 11 seconds left to give the unranked Huskers? their first lead since early in the game. IU failed to score on its last possession. Pandemonium ensued, as students rushed the court.

February 4: Fueled by Jared Sullinger?s 24 points and 10 rebounds, and a critical three-pointer down the stretch from William Buford, No. 3 Ohio State took a key win at No. 19 Wisconsin, 58-52. The triumph allowed the Buckeyes to end a nine-game losing streak in Madison.

February 11: No. 11 Michigan State almost made it look easy, strolling into Columbus and dumping No. 3 Ohio State, 58-48, to take control of the Big Ten race. The Spartans used suffocating defense to stymie Ohio State, limiting the Buckeyes to 26 percent shooting (14-of-53). MSU had a 10-point halftime lead that OSU never was able to chip away. The victory ended the Buckeyes? 39-game home unbeaten streak. The Spartans were paced by Adreian Payne?s 15 points, while Draymond Green added 12.

February 18: No. 17 Michigan showed it was an elite Big Ten team with a 56-51 over No. 6 Ohio State in Ann Arbor. The victory was especially sweet for Wolverine point guard Trey Burke, a native of Columbus, Ohio, who hit the game-clinching shot with 11 second left on his way to game-high 17 points.

February 23: It was Matt Gatens bobblehead doll night at Iowa, and the senior didn?t disappoint in leading the Hawkeyes to a 67-66 victory over No. 16 Wisconsin. Gatens tallied a career-high 33 points. It marked the second game in succession that Gatens notched a career high in points, as he scored 30 in a home win over No. 18 Indiana the game before. Gatens drained seven-of-10 three-pointers in each game to fuel a late-season run by the Hawkeyes.

February 25: Purdue?s 75-61 win over No. 11 Michigan in Ann Arbor was unexpectedly easy. But more important: This was a signature victory that basically solidified the Boilermakers? NCAA resume, as it easily was the program?s most impressive win of the season. This also was the Wolverines? first home loss, as they had no answer for Purdue guard Terone Johnson and his career-high 22 points.

February 26: Big man Jared Berggren knocked down the game-winning three-pointer with 31 seconds left to propel No. 16 Wisconsin to a 63-60 triumph over No. 8 Ohio State in Columbus. The win assured Michigan State of at least a share of the Big Ten championship. Berggren finished with 18 points, as the Badgers notched their first road victory over a top 10 team since 1980. That win, coincidently, was at No. 4 Ohio State, when Bo Ryan was a Badger assistant.

February 28: No. 18 Indiana continued its giant-killing ways, knocking off No. 5 Michigan State in Bloomington, 70-55. The Hoosiers jumped to a 41-27 halftime lead and never looked back. Cody Zeller led the way with 18 points, while Victor Oladipo had 13 and Christian Watford added 10 with a career-high 14 rebounds. The victory prevented MSU from clinching the outright Big Ten title. The win also meant that Indiana beat the No. 1 team (Kentucky), No. 2 team (Ohio State) and No. 5 team (Michigan State) for the first time in school annals in the regular season.

March 4: William Buford swished a killer jumper with one second left in the game to give No. 10 Ohio State a wild 72-70 win at No. 5 Michigan State. The Buckeyes, who were just 3-3 in the six games entering the contest, overcame a 15-point deficit and ruined Senior Day for Spartan star Draymond Green. But even better: The win helped the Buckeyes forge a tie with Michigan State and Michigan for the Big Ten title, preventing MSU from claiming the championship for themselves. Buford notched a game-high 25 points, with 19 coming in the second half to give MSU its only home loss of the season and avenge an earlier defeat to the Spartans in Columbus.

Use the Big Ten Men's Basketball Tournament interactive bracket below to track games live, print the bracket here, and find more links below.