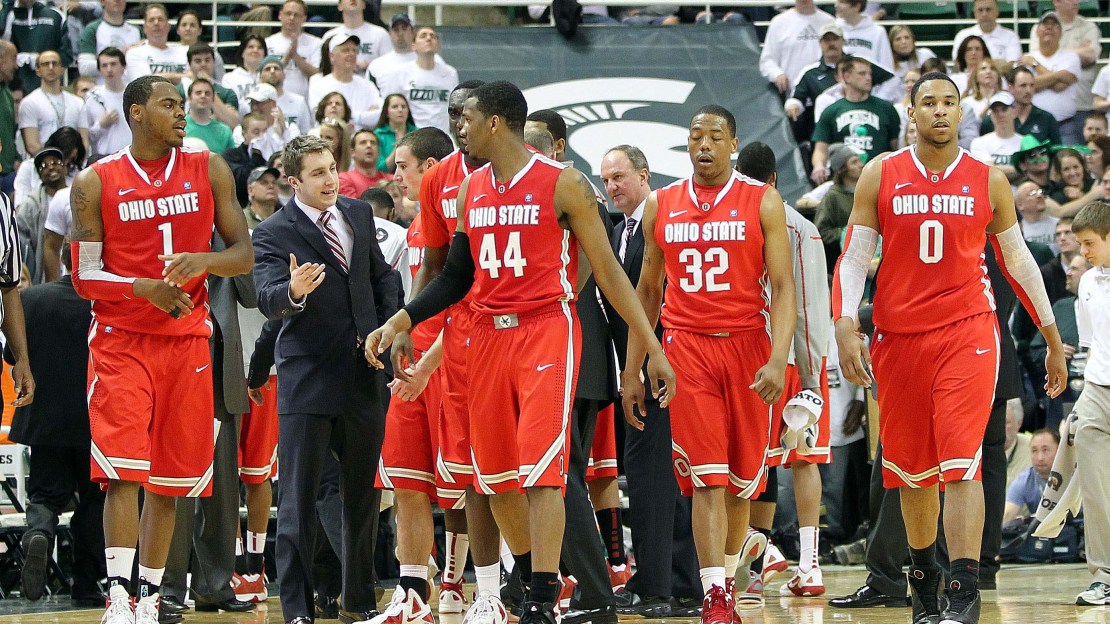 With Keith Appling draped all over him, William Buford hit an absolute dagger of a shot to help Ohio State down Michigan State and ensure a three-way tie atop the Big Ten conference for the season. While that makes banner manufacturers very happy, it was not the result the Spartans were expecting after they found themselves up by 9 after the first half. Ohio State won this game by keeping MSU off the glass, getting to the free throw line, and by the excellent work by whoever had the job of talking Buford into coming back to school every May. With Jared Sullinger largely ineffective, Buford put the Buckeyes on his back, carrying them with 25 points on 14 shots.

While this goes down as a three-way tie, and flags fly forever, the truth is that this has been a two-team race. I think John Beilein?s done a great job with his team this season, but anyone who is willing to wager that the Wolverines have as much Final Four potential as OSU or MSU should get their head examined.

While us Geeks will be handing out our own virtual hardware later this week, it?s fair to say that no one has coached a better season than Tom Izzo, despite the loss. Remember, the Spartans weren?t ranked to begin the season. Now they?re on the very short list of Teams That Could Beat Kentucky. Heck, we even had them finishing below Illinois. Yeah, I know. Of course, having the best season since the Flintstones (on paper) doesn?t mean much if it doesn?t come with a deep Tournament run. And those chances took a big hit in the form of Branden Dawson?s torn ACL. Dawson came on strong in the conference season, and easily played himself onto the All-Freshman team. With him out, the Spartans will need more contributions from the likes of Brandon Wood.

Elsewhere in the Big Ten, Indiana retook the state from Purdue, sweeping the Boilers for the first time since 2006. As has been the case for most of the season, the Hoosier offense was unstoppable. IU was a scorching 56 percent from behind the arc, en route to an offensive efficiency of over 1.2 points per possession. It?s amazing what a difference a year makes. Last season, the Hoosiers shot 34.6 percent from three-point range. This season, they?re at 43.2 percent, good for second in the nation. It?s even more remarkable considering the one big change to the roster is Cody Zeller. Zeller?s good, no doubt, but he?s not much of a perimeter threat. Credit all those offseason hours spent shooting.

Finally, the question for Northwestern is whether a season of no lowlights but few highlights is enough to get into the NCAA Tournament. After finishing off Iowa, the Wildcats sit at 18-12, and 8-10 in a very tough conference. For most teams, 8-10 is probably enough, considering the strength of the Big Ten. But Northwestern only played Michigan State, Wisconsin, and Indiana each once, and there really aren?t a lot of marquee wins on its resume. Indeed, Bill Carmody?s team sits at 1-10 against the RPI top 50. So they haven?t made it a habit of knocking off Goliath, but then again, there haven?t been any slip-ups–the Wildcats are 13-0 against teams ranked below the RPI top 100. If I?m Carmody, I?d feel a lot better with a couple of wins in Indianapolis.

And that wraps up another regular season in the Big Ten. Fear not, though, as we?ll be around this week to wrap up and preview Big Ten Tournament.

Use the Big Ten Men's Basketball Tournament interactive bracket below to track games live, print the bracket here, and find more links below.