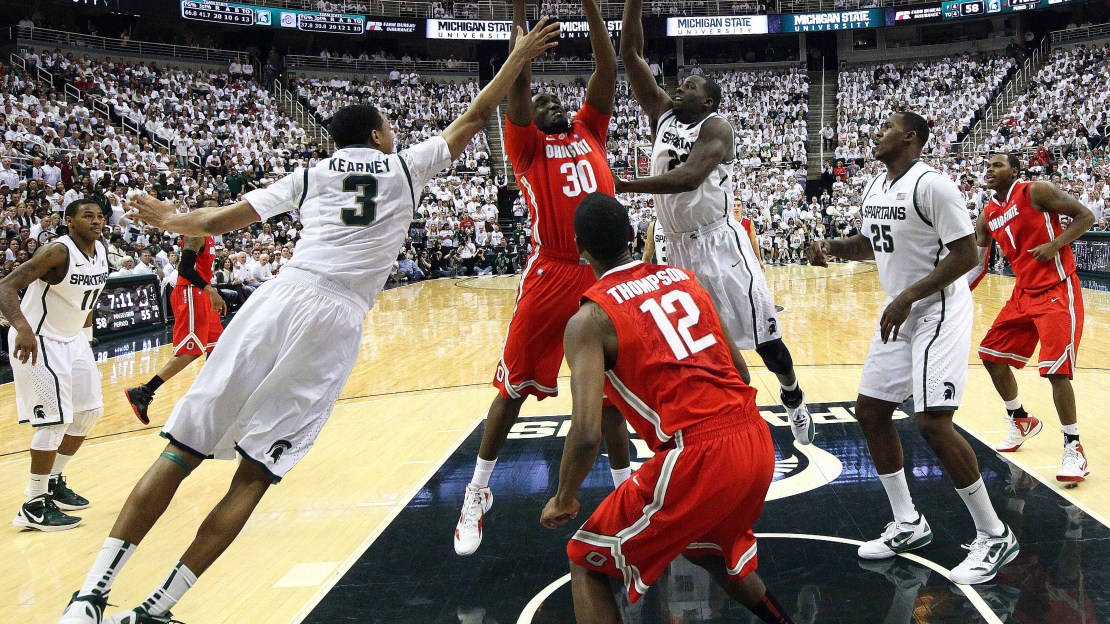 The bracket for the 15th Big Ten tourney is set, with games beginning on Thursday at Bankers Life Fieldhouse in Indianapolis. Michigan State, Michigan, Ohio State and Wisconsin are the top four seeds, respectively, with each receiving a bye in the first round. But the other eight schools will be in action on the first day of a tourney that has been dominated by Ohio State in recent years.

The Buckeyes have been to the tourney title game each of the last three years, winning the last two. Ohio State also won the 2007 crown. But 2012 brings a fresh slate for all the schools in what will be a 12-team tourney for the first time now that Nebraska is in the fold. Here?s a look at the tourney.

Hot team: Indiana. The No. 5 Hoosiers have won seven of their last eight games, the lone loss being a 10-point defeat at Iowa. Indiana is getting great play from freshman sensation Cody Zeller, while Christian Watford and Victor Oladipo really came on down the stretch. What?s it all mean? The Hoosiers may be primed to win their first Big Ten tourney championship as Tom Crean continues to build IU into a power in his fourth season in Bloomington.

Cold team: Michigan State. The No. 1 Spartans opened February with seven wins in a row but stumbled badly down the stretch, dropping its last two games: at Indiana and at home vs. Ohio State. The loss to the Buckeyes was especially confounding, as Michigan State blew a 15-point lead. And it had so much to play for on what was Senior Day for Draymond Green. The loss forced the Spartans to share the league title with Ohio State and Michigan-and it may have cost MSU a No. 1 seed in the Big Ten tourney. Also, stud freshman Branden Dawson tore his left ACL in Sunday's defeat, and that's going to be a big blow to the Spartans.

Easiest path: Michigan. Let?s be frank-no one?s path is THAT easy. Still, I like the No. 2 Wolverines? chances. They are in the bracket opposite No. 1 Michigan State, No. 4 Wisconsin and No. 5 Indiana. That means Michigan has No. 7 Northwestern, No. 10 Minnesota, No. 6 Purdue, No. 11 Nebraska and No. 3 Ohio State on its side of the bracket. Gotta like that, if you are John Beilein.

Toughest path: Penn State. Being a No. 12 seed doesn?t help. But the fact the Nittany Lions will have to play without Billy Oliver and Cammeron Woodyard-who are out with injuries-exasperates Penn State?s situation. This already is a talent-challenged team. Now, without its Nos. 3 and 4 scorers, the Nittany Lions are more compromised. Oh, and Penn State has lost four in a row, and six of its last eight, as it arrives in Indianapolis.

School that plays on Thursday with the most on the line: No. 7 Northwestern. On the bubble? Last four in? Last four out? If you look at enough bracket projections, you?ll likely find the Wildcats in one of those three categories. What?s it all mean? Bill Carmody?s crew needs to play with a sense of urgency. One win may be enough to sew up Northwestern?s first NCAA bid. But, maybe the Wildcats need to win two. Who knows?

School with a bye with the most on the line: Michigan State. The No. 1 Spartans not only are playing to win the Big Ten tourney for the first time since-can you believe this?-2000, but they also may be playing for a No. 1 seed. It looks like Kentucky and Syracuse have top seeds sewn up regardless of what happens in their respective conference tourneys. That leaves two No. 1 seeds up for grabs. A Big Ten tourney title will enhance a MSU resume that took a huge hit with that loss today at home to Ohio State. Still, I wonder if any Big Ten team will earn a No. 1 seed in the NCAA tourney. I?m starting to doubt it, but the Spartans have the best chance.

School with the least on the line that plays on Thursday: Iowa, Minnesota, Illinois, Nebraska and Penn State all must win the tourney to get admitted to the Big Dance. But the Cornhuskers (12-17) and Nittany Lions (12-19) are the only two teams that will arrive in Nap Town with losing records, making NIT bids out of the question. It?s all about pride for the Huskers and Nits.

School seeded too high: No. 3 Ohio State has a 4-3 record in its last seven games, losing to Michigan State at home, at Michigan and to Wisconsin at home. And the Buckeyes didn?t look overly impressive in dispatching Northwestern in Evanston. But give Thad Matta?s crew kudos for showing great moxie and toughness in winning at Michigan State today. Still, is OSU that much better than No. 4 Wisconsin or No. 6 Indiana at this moment?

Seeded too low: Indiana. Is there a hotter team in the Big Ten? The No. 5 Hoosiers have won seven of their eight games, the lone loss being a 10-point defeat at Iowa. Go figure. This is a team that I don?t think anyone will want to play, as Indiana has a lot of mojo and confidence as March continues to unfold.

Best opening-round matchup: No. 7 Northwestern vs. No. 10 Minnesota. Let?s just say it: This is a must-win for the Wildcats. Northwestern sits squarely on the bubble. A loss here could sabotage the Wildcats? bid for their first NCAA bid. The Gophers are coming off a win vs. Nebraska that ended a five-game losing skid. NU has won three of its last five.

Best possible Friday matchup: No. 4 Wisconsin vs. No. 5 Indiana. The teams met only once this season, with the Badgers taking a 57-50 win in Madison on January 26. Each team is built around shooting the three-pointer. The differences? Wisconsin plays great defense, but Indiana has a matchup nightmare with big man Cody Zeller.

Best possible Saturday matchup: Indiana vs. Michigan State. The teams split their two meetings, with the Spartans taking an 80-65 win in East Lansing on December 28. But the Hoosiers claimed the most recent meeting, downing Michigan State in Bloomington, 70-55, on February 28.

Best possible championship game matchup: No. 5 Indiana vs. No. 2 Michigan. How about some new blood? Don?t laugh. And this is a matchup that could happen. The Hoosiers are playing as well as any team in the Big Ten. The Wolverines also are a hot team. This would be a clash pitting freshmen sensations Cody Zeller and Trey Burke. Want more juiciness? Indiana never has won the Big Ten tourney title and has reached the championship game just once (2001). Michigan won the first Big Ten tourney in 1998 but hasn?t been back to the championship game since. The programs split their meetings this season, with each winning at home. This would be a fun game. Let?s play three!