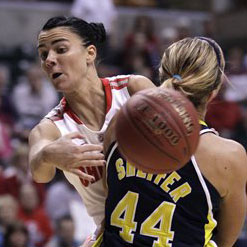 The second day of the 2012 Big Ten Women's Basketball Tournament features four more games, all live on BTN/BTN2Go. So far, Ohio State beat Michigan, 57-49, then Nebraska upset Iowa, 80-68. Also tonight, Penn State held off Minnesota, 78-74 and Purdue dropped Michigan State, 73-64. Get caught up on the action on the interactive bracket and find stats, video and recaps in this post.

Also, on BTN TV we'll be displaying the best tweets using the hashtag #B1Gtourney. We also set up a tweet tracker on our Facebook page you can check all tournament long.

Use this interactive bracket for the entire tournament.

Tayler Hill hit three 3-pointers and scored 19 points as No. 14 Ohio State held off a late charge to beat Michigan 57-48 in the quarterfinals of the Big Ten women's tournament Friday. Kalpana Beach scored 12 points for the second-seeded Buckeyes (25-5), who shot only 38 percent. Big Ten Player of the Year Samantha Prahalis scored 11 points but went 4 of 15 and turned it over seven times. However, her five assists made her the conference's all-time leader.

Lindsey Moore scored 26 points and two teammates had double-doubles as No. 24 Nebraska defeated Iowa 80-68 Friday in the quarterfinals of the Big Ten women's tournament. Moore hit 10 of 15 shots, including four 3-pointers, and had six assists and five steals for the sixth-seeded Cornhuskers. They'll face No. 14 Ohio State (25-5) in the semifinals Saturday.

Maggie Lucas scored 24 points, leading No. 9 Penn State past Minnesota 78-74 in Friday's Big Ten tournament quarterfinals. The top-seeded Nittany Lions (24-5) trailed by as much as 13 in the first half and will face either fourth-seeded Purdue or fifth-seeded Michigan State in Saturday's semifinals.

Brittany Rayburn scored 29 points to lead No. 21 Purdue to a 73-64 victory over Michigan State Friday night in the Big Ten women's tournament quarterfinals. Rayburn was 7 of 10 from 3-point range. Courtney Moses added 14 points and Chantel Poston scored 10 for the fourth-seeded Boilermakers (22-8), who will play No. 9 Penn State, the top seed, in Saturday's second semifinal.