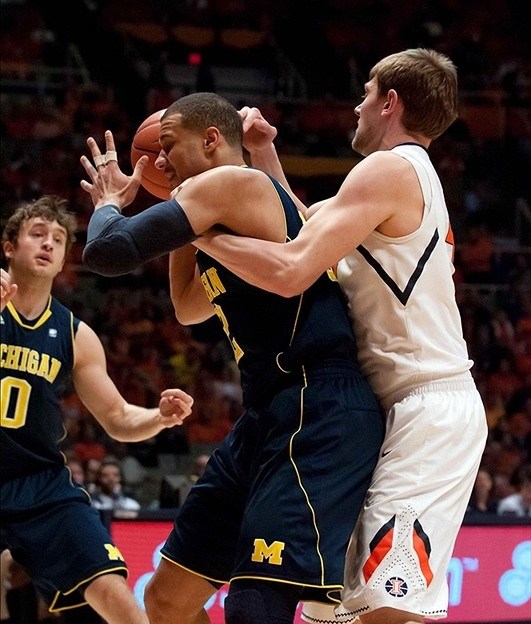 FINAL: Tim Hardaway Jr. scored 25 points and grabbed 11 rebounds to lift No. 16 Michigan to a 72-61 win over Illinois on Thursday at Assembly Hall in Champaign. Michigan (22-7) got solid performances from both Hardaway Jr. and Trey Burke. Hardaway Jr. shot 6-of-7 from the field. Burke scored 21 points, pulled down three rebounds, handed out six assists, and went 7-of-13 from the field. The Wolverines shot 47 percent from the field (21-of-45). Michigan was hot from long range, hitting 9-of-19 threes for a 47 percent night from beyond the arc.

The Wolverines went 21-of-23 from the charity stripe as a team (91 percent). Meyers Leonard had 18 points, grabbed nine rebounds, and knocked down 6-of-11 shot attempts for Illinois (16-13) in the loss. The Fighting Illini had trouble finding their touch, shooting just 39 percent (21-of-54) from the field. Illinois also got double-digit efforts from Tracy Abrams, who scored 12 and Brandon Paul, who scored 15. Winning the battle on the boards was crucial for Michigan as it grabbed 32 rebounds to 24 for the Fighting Illini. The Wolverines never trailed in the game. Michigan's largest lead was 13, which came with 3:40 left in the first half. The Wolverines led 22-18 in the first before they widened the margin to 13 points with a 13-4 run that ended late in the first. Burke capped the run off with a field goal that helped the Wolverines lead 35-27 at the half.