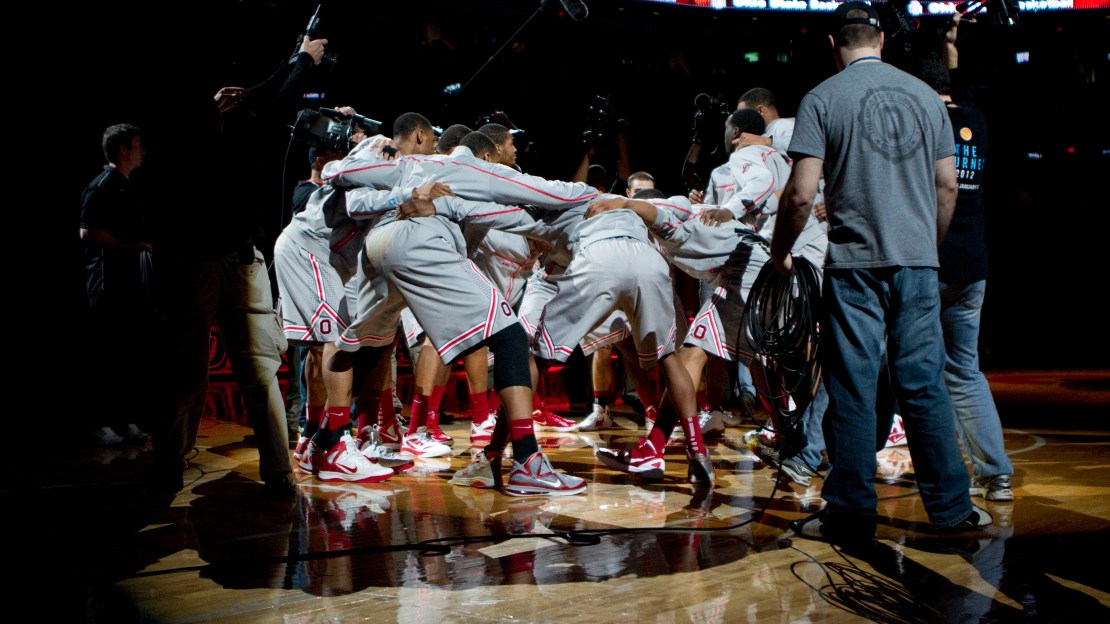 The last week of the regular season is here. Where?s the drama? Michigan State already has sewn up at least a share of Tom Izzo?s seventh Big Ten title thanks to the Spartans pushing their winning streak to seven and Ohio State and Michigan both losing-at home, no less-over the weekend (standings). Michigan State can claim the outright title with a win at Indiana on Tuesday, potentially taking any remaining pizzazz out of that season-ending visit to East Lansing by Ohio State.

So, if you want storylines, keep your eye on Northwestern and its quest to finish strong and push toward the program?s first NCAA bid. And Wisconsin has something on the line as the Badgers look to sew up fourth place, which would give them a bye in the first round of the Big Ten tournament.

GAME OF THE WEEK: Ohio State at Michigan State, Sunday, March 4. This game lost a lot of its luster when the Buckeyes got dumped at home by Wisconsin on Sunday. The loss by Ohio State (11-5) allowed the Spartans (13-3) to clinch a share of the Big Ten title. The best the Buckeyes can do is earn a share of the league title, but that would mean winning at Northwestern on Wednesday and then beating the Spartans, who have won seven in a row. And MSU would have to lose at Indiana on Tuesday. Yes, that?s asking a lot, especially when you consider that MSU handled the Buckeyes, 58-48, in Columbus earlier this season and Ohio State has lost three of its last five games. But, you never know.

DON?T OVERLOOK THIS MATCHUP: Michigan State at Indiana, Tuesday, February 28. Before the Spartans play host to Ohio State, Michigan State must wade into Bloomington to play dangerous Indiana (9-7). The Hoosiers are 16-1 in Assembly Hall and have won five of their last six games as they look to enhance an already-strong NCAA resume. The Spartans won the first meeting, 80-65, back in late December. No doubt, Ohio State will be pulling hard for Indiana. Still, even if MSU loses to the Hoosiers, it still already has that share of the Big Ten title in its back pocket. So, the Spartans have that going for them ? which is nice.

MUST WIN: Northwestern (7-9) must find a way to win at Iowa on Saturday, March 3. The Wildcats? NCAA dossier needs to be augmented. A win in Iowa City would give Northwestern some momentum as it enters the Big Ten tourney, where the Wildcats may need to win a game or two to secure the first NCAA bid in school annals. Without this victory over Iowa, Northwestern?s Big Dance odds would take a hit. Of course, this also is a must-win for Iowa, which is clinging to some faint NCAA hopes.

INJURY UPDATE: Northwestern?s push for its first NCAA bid will be hampered if big man Luka Mirkovic can?t return from an ankle injury. The senior rolled his left ankle in practice in late January He last played vs. Minnesota on January 22. He had started 15 games and averaged 5.9 points and 3.8 rebounds. The Wildcats have done pretty well without the big fella. Still, this defensive-challenged team could use Mirkovic.

BIG WEEK: Wisconsin. The Badgers (10-6) are coming off a huge win at Ohio State on Sunday to put them in sole possession of fourth place. Why is that vital? Because the top four teams earn byes in the Big Ten tourney. Wisconsin is just 3-3 in February but can secure fourth place by winning out this week by beating Minnesota and Illinois at home. Purdue and Indiana-each 9-7–are breathing down Wisconsin?s neck.

STAT WATCH: Let?s hear it for Purdue?s Robbie Hummel! The senior has put the Boilermakers on his back down the stretch with some of the best play of his career. He has scored 17 or more points in each of the past five games. Not coincidentally, the Boilers have won four of those games to solidify their NCAA standing. Add it all up, and Hummel is averaging 23.2 points in the last five games, hitting 36-of-74 shots (48.6 percent), 13-of-31 three-pointers (41.9 percent) and grabbing 51 rebounds. Hummel will look to maintain his torrid pace when Penn State visits on Wednesday and then in a season-ending trip to Indiana on Sunday.